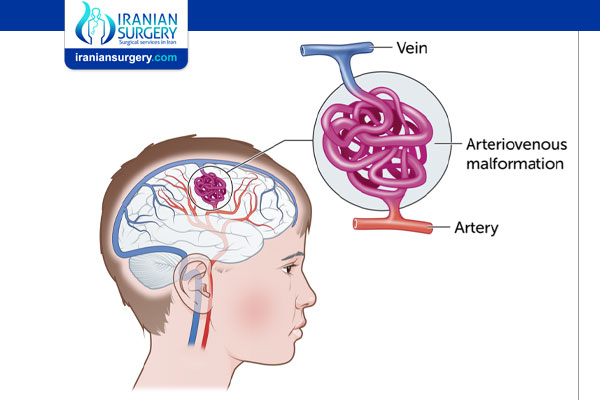 What is Arteriovenous Malformation (AVM)?

An arteriovenous malformation (AVM) is an abnormal tangle of blood vessels connecting arteries and veins, which disrupts normal blood flow and oxygen circulation.

Arteries are responsible for taking oxygen-rich blood from the heart to the brain. Veins carry the oxygen-depleted blood back to the lungs and heart.

When an AVM disrupts this critical process, the surrounding tissues may not get enough oxygen. Also, because the tangled blood vessels that form the AVM are abnormal, they can weaken and rupture. If the AVM is in the brain and ruptures, it can cause bleeding in the brain (hemorrhage), stroke or brain damage.

The cause of AVMs is not clear. They're rarely passed down among families.

Once diagnosed, a brain AVM can often be treated successfully to prevent or reduce the risk of complications.

Iranian surgery is an online medical tourism platform where you can find the best Surgeons in Iran. The price of Arteriovenous Malformation treatment in Iran can vary according to each individual’s case and will be determined by an in-person assessment with the doctor.

For more information about the cost of Arteriovenous Malformation treatment in Iran and to schedule an appointment in advance, you can contact Iranian Surgery consultants via WhatsApp number 0098 901 929 0946. This service is completely free.

. Other possible signs and symptoms include:

. Paralysis in one part of the body

. Loss of coordination that can cause problems with gait

. Weakness in the lower extremities

. Vision problems, including losing part of your field of vision, loss of control of eye movements, or swelling of part of the optic nerve

. Problems with speech or understanding language

Children and teens may have trouble with learning or behavior.

. A buildup of fluid in the brain (hydrocephalus) that causes enlargement of the head

. Swollen veins on the scalp

Seek medical attention if you have any of the signs and symptoms of an AVM, such as headaches, dizziness, vision problems, seizures and changes in thinking or neurological function. Many AVMs are currently discovered incidentally, often after a CT scan or an MRI is obtained for reasons not directly related to the AVM.

AVMs result from development of abnormal direct connections between arteries and veins, but experts don't understand why this happens. Certain genetic changes might play a role, but most types are not usually inherited.

Rarely, having a family history of AVMs can increase your risk. But most types of AVMs aren't inherited.

The most common complications of an AVM are bleeding and seizures. If left untreated, the bleeding can cause significant neurological damage and be fatal.

To diagnose an AVM, your doctor will review your symptoms and perform a physical examination.

He or she may listen for a sound called bruit. Bruit is a whooshing sound caused by very rapid blood flow through the arteries and veins of an AVM. It sounds like water rushing through a narrow pipe. Bruit may interfere with hearing or sleep or cause emotional distress.

. Cerebral angiography. Also called arteriography, this test uses a special dye called a contrast agent injected into an artery. The dye highlights the structure of blood vessels to better show them on X-rays.

. Computerized tomography (CT). CT scans use X-rays to create images of the head, brain or spinal cord and can help show bleeding.

. Magnetic resonance imaging (MRI). An MRI uses powerful magnets and radio waves to show detailed images of the tissues. An MRI can pick up on small changes in these tissues.

. Magnetic resonance angiography (MRA). An MRA captures the pattern and the speed and distance of blood flow through the vascular abnormalities.

Treatment for AVM depends on where the abnormality is found, your signs and symptoms and your overall health, and the risk of treatment. Sometimes, an AVM is monitored with regular imaging tests to watch for changes or problems. Other AVMs require treatment. Determining whether an AVM needs treatment involves factors including whether the AVM:

. Is causing symptoms other than bleeding

. Is in a part of the brain that treatment can be safely given

Medications can help manage symptoms such as seizures, headaches and back pain.

The main treatment for AVM is surgery. Your doctor might recommend surgery if you're at a high risk of bleeding. The surgery might completely remove the AVM. This treatment is usually used when the AVM is in an area where surgeons can remove the AVM with little risk of causing significant damage to the brain tissues.

Endovascular embolization is a type of surgery in which the surgeon threads a catheter through the arteries to the AVM. Then a substance is injected to close parts of the AVM to reduce the blood flow. This might also be done before brain surgery or radiosurgery to help reduce the risk of complications.

Sometimes stereotactic radiosurgery is used to treat AVMs. This uses intense, highly focused beams of radiation to damage the blood vessels and stop the blood supply to the AVM.

You and your doctors will discuss whether to treat your AVM, weighing the possible benefits against the risks.

1Can an AVM be cured?
In most patients, the AVM will be cured in 1-3 years after treatment. Such radiosurgery is most useful for smaller AVMs, but can be used selectively for the treatment of larger AVMs. Endovascular Embolization: A small catheter (tube) is used in this inpatient procedure.
2What causes arteriovenous malformations?
The cause of cerebral AVM is unknown. An AVM occurs when arteries in the brain connect directly to nearby veins without having the normal small vessels (capillaries) between them. AVMs vary in size and location in the brain. An AVM rupture occurs because of pressure and damage to the blood vessel.
3What is the survival rate of an AVM?
Overall mortality rates in AVM patients range from 0.7%–2.9% per year [9].
4Is arteriovenous malformation life threatening?
Bleeding in the brain (hemorrhage). An AVM puts extreme pressure on the walls of the affected arteries and veins, causing them to become thin or weak. ... Some hemorrhages associated with AVMs go undetected because they cause no major brain damage or symptoms, but potentially life-threatening bleeding episodes may occur
5Can AVM grow back?
Since AVMs do not grow back, the cure is immediate and permanent if the AVM is removed completely. The risks of surgery are considered to be high for AVMs that are located in deep parts of the brain with very important functions
6Are venous malformations dangerous?
Venous malformations can occur near the surface of the skin or deep inside the body. ... If the skin that covers the malformation is very thin and becomes stretched as it grows, it can bleed. Blood can pool in the dilated veins, resulting in painful, but not dangerous, blood clots, known as thrombophlebitis
7What is the recovery time after AVM surgery?
You may feel more tired than usual for several weeks. You may be able to do many of your usual activities after 4 to 6 weeks. But you will probably need 2 to 6 months to fully recover. This care sheet gives you a general idea about how long it will take for you to recover.
8Is arteriovenous malformation genetic?
No environmental risk factors have been identified for neurological AVM. AVM does not usually run in families, but somewhere on the order of 5% of AVMs may be due to autosomal dominant inheritance of a genetic mutation, most commonly hereditary hemorrhagic telangiectasia or the capillary malformation-AVM syndrome
9Is AVM surgery dangerous?
Resection is usually done when the AVM can be removed with little risk of hemorrhage or seizures. AVMs that are in deep brain regions carry a higher risk of complications
10Can AVM cause personality changes?
Do you believe AVMs cause personality changes even before they bleed? ... If the frontal lobe is involved, such as an AVM in the parietal lobe, it can 'steal' blood from other parts of the brain that could result in a change in personality. An MRI may be able to help sort that out