Skin cancer is a cancer that originates from the skin. They are due to the development of abnormal cells that have the ability to invade or spread to other parts of the body.  There are three major types of skin cancers: basal-cell skin cancer (BCC), squamous-cell skin cancer (SCC), and melanoma. The first two, along with a number of less common skin cancers, are known as nonmelanoma skin cancer (NMSC).  Basal-cell cancer grows slowly and can damage the tissue around it but is unlikely to spread to distant areas or result in death.  It often appears as a painless raised area of ​​the skin, which may be shiny with small blood vessels running over it or may present as a raised area with an ulcer.  Squamous-cell skin cancer is more likely to spread. [5] It usually presents as a hard lump with a scaly top but may also form an ulcer.  Melanomas are the most aggressive. Signs include a mole that has changed in size, shape, color, has irregular edges, has more than one color, is itchy or bleeding.

Greater than 90% of the cases are caused by exposure to ultraviolet radiation from the Sun.  This exposure increases the risk of all three major types of skin cancer.  Exposure has increased partially due to a thinner ozone layer. Tanning beds are becoming another common source of ultraviolet radiation.  For melanoma and basal-cell cancer exposure during childhood is particularly harmful.  For squamous-cell skin cancers, total exposure, irrespective of when it occurs, is more important. [4] Between 20% and 30% of melanomas develop from moles.  People with light skin are at higher risk  as are those with poor immune function such as from drugs or HIV / AIDS.  Diagnosis is by biopsy.

Decreasing exposure to ultraviolet radiation and using sunscreen appear to be effective methods for preventing melanoma and squamous cell skin cancer.  It is not clear if sunscreen affects the risk of basal cell cancer.  Non-melanoma skin cancer is usually curable. [5] Treatment is usually by surgical removal but may be less common in radiation therapy or topical medications such as fluorouracil.  Treatment of melanoma may involve some combination of surgery, chemotherapy, radiation therapy, and targeted therapy. [3] In those people whose disease has spread to other areas of their bodies, palliative care may be used to improve the quality of life.  Melanoma has one of the highest survival rates among cancers, with over 86% of people in the UK and more than 90% in the United States surviving more than 5 years.

Skin cancer is the most common form of cancer, globally accounting for at least 40% of cases. The most common type is nonmelanoma skin cancer, which occurs in at least 2-3 million people a year.  This is a rough estimate, however, as good statistics are not kept.  Of nonmelanoma skin cancers, about 80% are basal cell cancers and 20% squamous cell skin cancers.  Basal-cell and squamous-cell skin cancers rarely result in death. [6] In the United States they were the cause of less than 0.1% of all cancer deaths. [1] Globally in 2012 melanoma occurred in 232,000 people, and resulted in 55,000 deaths.  White people in Australia, New Zealand and South Africa have the highest rates of melanoma in the world. [6] [19] The three major types of skin cancer have become more common in the last 20 to 40 years, especially in those areas which are mostly Caucasian. 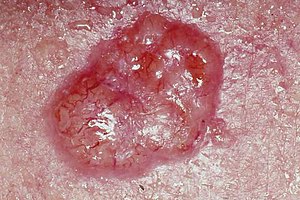 Basal-cell carcinomas are present on sun-exposed areas of the skin, especially the face. They rarely metastasize and rarely cause death. They are easily treated with surgery or radiation. Squamous-cell skin cancer are common, but much less common than basal-cell cancers. They metastasize more frequently than BCCs. Even then, the metastasis rate is quite low, with the exception of SCC of the lip, ear, and in people who are immunosuppressed. Melanoma are the least frequent of the 3 common skin cancers. They frequently metastasize, and could potentially cause death once they spread.

BCC and SCC often carry a UV-signature mutation indicating that these cancers are caused by UVB radiation via direct DNA damage. However malignant melanoma is predominantly caused by UVA radiation via indirect DNA damage. The indirect DNA damage is caused by free radicals and reactive oxygen species. Research indicates that the absorption of three sunscreen ingredients into the skin, combined with a 60-minute exposure to UV, leads to an increase of free radicals in the skin, if applied in too little quantities and too infrequently. However, the researchers add that newer creams often do not contain these specific compounds, and that the combination of other ingredients tends to retain the compounds on the surface of the skin. They also add the frequent re-application reduces the risk of radical formation.

There are a variety of different skin cancer symptoms. These include changes in the skin that do not heal, ulcering in the skin, discolored skin, and changes in existing moles, such as jagged edges to the mole and enlargement of the mole.

Basal-cell skin cancer (BCC) usually presents as a raised, smooth, pearly bump on the sun-exposed skin of the head, neck or shoulders. Sometimes small blood vessels (called telangiectasia) can be seen within the tumor. Crusting and bleeding in the center of the tumor frequently develops. It is often mistaken for a sore that does not heal. This form of skin cancer is the least deadly and with proper treatment can be completely eliminated, often without scarring.

Squamous-cell skin cancer (SCC) is commonly a red, scaling, thickened patch on sun-exposed skin. Some are firm hard nodules and dome shaped like keratoacanthomas. Ulceration and bleeding may occur. When SCC is not treated, it may develop into a large mass. Squamous-cell is the second most common skin cancer. It is dangerous, but not nearly as dangerous as a melanoma.

Most melanoma consist of various colours from shades of brown to black. A small number of melanoma are pink, red or fleshy in colour; these are called amelanotic melanoma and tend to be more aggressive. Warning signs of malignant melanoma include change in the size, shape, color or elevation of a mole. Other signs are the appearance of a new mole during adulthood or pain, itching, ulceration, redness around the site, or bleeding at the site. An often-used mnemonic is “ABCDE”, where A is for “asymmetrical”, B for “borders” (irregular: “Coast of Maine sign”), C for “color” (variegated), D for “diameter” (larger than 6 mm – the size of a pencil eraser) and E for “evolving.”

Merkel cell carcinomas are most often rapidly growing, non-tender red, purple or skin colored bumps that are not painful or itchy. They may be mistaken for a cyst or another type of cancer.

Ultraviolet radiation from sun exposure is the primary environmental cause of skin cancer. Other risk factors that play a role include: