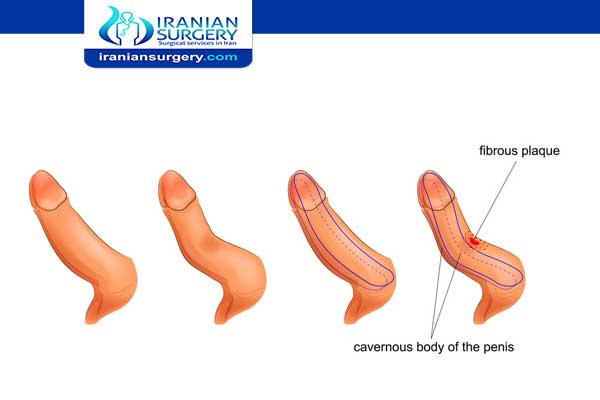 Read more about : Disadvantages of having one testicle

Penile curvature in adults is divided into two main categories the first is congenital penile curvature (meaning men are born with it) with orthotopic meatus and the other is acquired curvature which its common causes are Peyronie's disease (PD) and previous penile surgery as for hypospadias repair. The congenital penile curvatures (CPC) which not associated with urethral malformation is a relatively uncommon condition that may present in late adolescent or early adult life. The incidence is estimated to be 0.6 % but the incidence of clinically significant CPC is much lower, as the degree of curvature and sexual dysfunction varies widely Penile curvature may lead to inability for sexual intercourse. These cases require treatment.

Acquired penile curvature its most common cause is Peyronie's disease. Peyronie's disease is a fibrotic disorder of the tunica albuginea of the corpora cavernosa that is clinically defined by the presence of a palpable, inelastic tunical plaque. PD is relatively common and affects up to 20.3% of adult men to some degree.

What is Peyronie’s Disease?

Erectile dysfunction (ED) is a condition in which a man has difficulty getting or maintaining an erection. It can cause problems in the bedroom for men of all ages. One rare form of ED, called Peyronie’s disease, results in a bend in the penis that can make an erection painful.

Peyronie’s disease is a disorder in which scar tissue, called a plaque, forms in the penis—the male organ used for urination and sex. The plaque builds up inside the tissues of a thick, elastic membrane called the tunica albuginea. The most common area for the plaque is on the top or bottom of the penis. As the plaque builds up, the penis will curve or bend, which can cause painful erections. Curves in the penis can make sexual intercourse painful, difficult, or impossible. Peyronie’s disease begins with inflammation, or swelling, which can become a hard scar.

. Acute injury to the penis

. Chronic, or repeated, injury to the penis

. Autoimmune disease—a disorder in which the body’s immune system attacks the body’s own cells and organs

Injury to the Penis

As the injury heals, the immune system cells may release substances that lead to the formation of too much scar tissue. The scar tissue builds up and forms a plaque inside the penis. The plaque reduces the elasticity of tissues and flexibility of the penis during erection, leading to curvature. The plaque may further harden because of calcification––the process in which calcium builds up in body tissue.

Some medical experts believe that Peyronie’s disease may be part of an autoimmune disease. Normally, the immune system is the body’s way of protecting itself from infection by identifying and destroying bacteria, viruses, and other potentially harmful foreign substances.

What are the signs and symptoms of Peyronie’s disease?

The signs and symptoms of Peyronie’s disease may include:

. Hard lumps on one or more sides of the penis

. Pain during sexual intercourse or during an erection

. A curve in the penis either with or without an erection

. Narrowing or shortening of the penis

Symptoms of Peyronie’s disease range from mild to severe. Symptoms may develop slowly or appear quickly. In many cases, the pain decreases over time, although the curve in the penis may remain. In milder cases, symptoms may go away without causing a permanent curve.

. Heredity. If a family member has Peyronie's disease, you have an increased risk of the condition.

. Other factors — including certain health conditions, smoking and some types of prostate surgery — might be linked to Peyronie's disease.

. Inability to have sexual intercourse

. Anxiety or stress about sexual abilities or the appearance of your penis

.  Stress on your relationship with your sexual partner

. Difficulty fathering a child, because intercourse is difficult or impossible

Who is more likely to develop Peyronie’s disease?

The following factors may increase a man’s chance of developing Peyronie’s disease:

. Vigorous sexual or nonsexual activities that cause microscopic injury to the penis

. A family history of Peyronie’s disease

How common is Peyronie’s disease?

How is Peyronie’s disease diagnosed?

. An urologist diagnoses Peyronie’s disease based on

. A medical and family history

How to distinguish congenital curvature and Peyronie’s Disease?

Peyronie's disease is often split into 2 stages: the acute phase and the chronic phase. During both phases, the bent/curved penis may cause problems with sex. You also may have ED.

. Acute Phase: The acute phase lasts for 6 to 18 months. During this time, the plaques form in the penis, the bending/curving of the penis gets worse, and you may feel pain when your penis gets hard.

. Chronic Phase: The chronic phase is when the plaque stops growing and the penis doesn't bend any further. If there was pain with erection during the acute phase, it often will have ended by this time.

How is Peyronie’s disease treated?

An urologist may treat Peyronie’s disease with nonsurgical treatments or surgery.

The goal of treatment is to reduce pain and restore and maintain the ability to have intercourse. Men with small plaques, minimal penile curvature, no pain, and satisfactory sexual function may not need treatment until symptoms get worse. Peyronie’s disease often resolves on its own without treatment.

An urologist may recommend changes in a man’s lifestyle to reduce the risk of ED associated with Peyronie’s disease.

Injections. Medications injected directly into plaques may include

To date, collagenase is the first and only medication specifically approved for Peyronie’s disease.

. Radiation therapy––high-energy rays, such as x-rays, aimed at the plaque

An urologist may use iontophoresis––painless, low-level electric current that delivers medications through the skin over the plaque––to decrease plaque size and curvature.

An urologist may use mechanical traction and vacuum devices aimed at stretching or bending the penis to reduce curvature.

. Symptoms have not improved

. Erections, intercourse, or both are painful

. The curve or bend in the penis does not allow the man to have sexual intercourse

Some men may develop complications after surgery, and sometimes surgery does not correct the effects of Peyronie’s disease––such as shortening of the penis. Some surgical methods can cause shortening of the penis. Medical experts suggest waiting 1 year or more from the onset of symptoms before having surgery because the course of Peyronie’s disease is different in each man.

An urologist may recommend the following surgeries:

. Grafting. An urologist will cut or remove the plaque and attach a patch of skin, a vein, or material made from animal organs in its place. This procedure may straighten the penis and restore some lost length from Peyronie’s disease. However, some men may experience numbness of the penis and ED after the procedure.

. Plication. An urologist will remove or pinch a piece of the tunica albuginea from the side of the penis opposite the plaque, which helps to straighten the penis. This procedure is less likely to cause numbness or ED. Plication cannot restore length or girth of the penis and may cause shortening of the penis.

. Device implantation. An urologist implants a device into the penis that can cause an erection and help straighten it during an erection. Penile implants may be considered if a man has both Peyronie’s disease and ED. In some cases, an implant alone will straighten the penis adequately. If the implant alone does not straighten the penis, an urologist may combine implantation with one of the other two surgeries. Once a man has an implant, he must use the device to have an erection.

An urologist performs these surgeries in a hospital.

A light pressure dressing is often left on the penis for 24 to 48 hours after surgery to stop bleeding and hold the repair in place. During surgery, a tube (catheter) will have been placed through the end of the penis into the bladder, and this may still be in place when you wake up. The tube is often removed in the recovery room.

Most patients leave the hospital the same day after surgery or the next morning. You may be given antibiotics to take for a few days to lower the risk of infection and help keep swelling down, as well as pain meds. You shouldn't have sex for at least 6 weeks after surgery, or longer in cases of complex repairs.

How can I find the best Urologists in Iran?

It is important that you seek the assistance of experienced and skilled Urologists in Iran who have provided a suitable condition for people with limited budgets to undergo Penile Curvature Surgery in Iran easily. It is worth explaining that the quality provided by Iranian surgeons is far higher than other countries including Turkey and India.

There are many factors that determine the overall Penile Curvature Surgery cost, including: