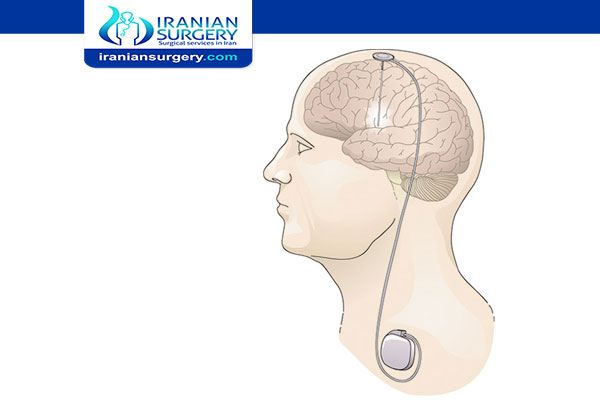 What is Deep Brain Stimulation?

Deep brain stimulation (DBS) is a type of therapy used to relieve neurological symptoms associated with Parkinson’s disease such as:

DBS will not cure Parkinson’s disease or other neurological conditions. But it can lessen symptoms and improve overall quality of life.

. Leads (thin insulated wires) that end in electrodes that are implanted in the brain.

. A small pacemaker-like device, called a pulse generator that creates the electrical pulses.

. Extension leads that carry electrical pulses from the device and are attached to the leads implanted in the brain.

. Hand-held programmer device that adjusts the device’s signals and can turn the device off and on.

In deep brain stimulation, electrodes are placed in the targeted areas of the brain. The electrodes are connected by wires to a type of pacemaker device (called an implantable pulse generator) placed under the skin of the chest below the collarbone.

Iranian surgery is an online medical tourism platform where you can find the best neurosurgeons in Iran. The price of a Deep Brain Stimulation Surgery in Iran can vary according to each individual’s case and will be determined based on photos and an in-person assessment with the doctor. So if you are looking for the cost of Deep Brain Stimulation Surgery in Iran, you can contact us and get free consultation from Iranian surgery.

What kinds of neurologic conditions can be treated with deep brain stimulation?

Deep brain stimulation is approved by the Food and Drug Administration to treat a variety of movement and neurologic disorders including:

Deep brain stimulation is also being studied for use in the following conditions:

How does DBS treat Parkinson’s?

Parkinson’s disease causes irregular electrical signals in parts of the brain that control movement. DBS uses electrical stimulation to modulate these control centers deep to the surface of the brain, improving communication between brain cells.

This helps to reduce symptoms such as tremor, slowness, and stiffness. It doesn’t have much of an effect on non-motor symptoms or balance issues.

DBS is the most commonly performed surgical procedure for symptoms of Parkinson’s disease.

Who’s a good candidate for DBS?

DBS isn’t a first-line therapy. It’s intended for people whose symptoms are still unmanageable even with medication.

You might be a good candidate for DBS if:

. You’ve had symptoms for at least five years

. Your symptoms respond to medication, but the effect doesn’t last as long as it used to.

. Your symptoms interfere with everyday life

Your doctor is unlikely to recommend DBS if:

. You have memory and thinking problems

. You have anxiety or depression that hasn’t stabilized with treatment

Read more about: Types of chemotherapy

Read more about: Chemo side effects

What are the advantages of deep brain stimulation (DBS)?

. Unlike some other surgical options, DBS does not cause permanent damage in any part of the brain.

. The electrical stimulation is adjustable and reversible as the person's disease changes or his or her response to medications change.

. Because DBS is reversible and causes no permanent brain damage, use of innovative not-yet-available treatment options may be possible.

. The stimulator can also be turned off at any time if DBS is causing excessive side effects without any long-term consequences.

Deep brain stimulation involves creating small holes in the skull to implant the electrodes, and surgery to implant the device that contains the batteries under the skin in the chest. Complications of surgery may include:

. Bleeding in the brain

. Possible side effects after surgery

Side effects associated with deep brain stimulation may include:

. Temporary pain and swelling at the implantation site

A few weeks after the surgery, the device will be turned on and the process of finding the best settings for you begins. Some settings may cause side effects, but these often improve with further adjustments of your device.

Because there have been infrequent reports that the DBS therapy affects the movements needed for swimming, the Food and Drug Administration recommends consulting with your doctor and taking water safety precautions before swimming.

. Possible side effects of stimulation

. Muscle tightness of the face or arm

. Vision problems, such as double vision

. Unwanted mood changes, such as anger and depression

Hardware complications include movement of the leads, lead failure, failure of any part of the DBS system, pain over the pulse generator device, battery failure, infection around the device and the device breaking through the skin as the thickness of skin and fat layer change as one ages.

. First, weigh the pros and cons

. Next, preparing for surgery

Before surgery, you'll need medical tests to make sure that deep brain stimulation is a safe and appropriate option for you. You'll also need brain-imaging studies, such as an MRI, before the surgery, to map the areas of your brain to implant the electrodes.

In general, here's how surgery for deep brain stimulation works:

. Brain surgery. For the brain surgery portion, your care team fits you with a special head frame to keep your head still during the procedure (stereotactic head frame). Then, team members use magnetic resonance imaging (MRI) to map your brain and identify the area in your brain where they'll place the electrodes.

Surgery can be done under general anesthesia so that you'll be unconscious. Or the procedure can be done with you awake and alert. If you're awake for surgery, you'll be given a local anesthetic to numb your scalp before the procedure, but you won't need an anesthetic in your brain itself because the brain has no pain receptors.

Your surgeon implants a thin wire lead with a number of contacts (electrodes) at the tips into a specific area of your brain. Or one lead is implanted into each side of the brain (for a total of two leads). A wire runs under your skin to a pulse generator (neurostimulator) implanted near your collarbone.

During surgery, both the neurologist and surgeon carefully monitor your brain to help ensure correct electrode placement.

. Chest wall surgery. During the second portion of the surgery, the surgeon implants the part of the device that contains the batteries (pulse generator) under the skin in your chest, near your collarbone.

General anesthesia is used during this procedure. Wires from the brain electrodes are placed under your skin and guided down to the battery-operated pulse generator.

The generator is programmed to send continuous electrical pulses to your brain. You control the generator, and you can turn it on or off using a special remote control.

Are there any alternative treatments?

Some research suggests that a supplement called coenzyme Q10 may help in the early stages of Parkinson’s when taken for 16 months or longer. For mild to moderate Parkinson’s, the practice of tai chi may help improve balance more than resistance training or stretching.

Other complementary therapies may include:

. Massage or meditation for relaxation

. Yoga to improve flexibility and balance

Some dietary or herbal supplements can react with medications, so talk to your doctor before starting any supplements.

The average hospital stay following implantation of the DBS leads is 1 to 2 days. Most patients are able to return home on the same day that their battery is placed.

A few weeks after surgery, the pulse generator in your chest is activated in your doctor's office. The doctor can easily program your pulse generator from outside your body using a special remote control. The amount of stimulation is customized to your condition, and may take as long as four to six months to find the optimal setting.

Stimulation may be constant, 24 hours a day, or your doctor may advise you to turn your pulse generator off at night and back on in the morning, depending on your condition. You can turn stimulation on and off with a special remote control that you'll take home with you. In some cases, your doctor may program the pulse generator to let you make minor adjustments at home.

The battery life of your generator varies with usage and settings. When the battery needs to be replaced, your surgeon will replace the generator during an outpatient procedure.

. Your stitches or staples will be removed 10 to 14 days after surgery.

. Each of the 4 pin sites should be kept covered with band aids until they are dry. These should be changed every day as necessary.

. You will be able to wash your head with a damp cloth, avoiding the surgical area.

. You may only shampoo your hair the day after your stitches or staples are removed, but only very gently.

. You should not scratch or irritate the wound areas.

. You should not engage in light activities for 2 weeks after surgery. This includes housework and sexual activity.

. You should not engage in heavy activities for 4 to 6 weeks after surgery. This includes jogging, swimming, or any physical education classes. Anything strenuous should be avoided to allow your surgical wound to heal properly. If you have any questions about activities, call your doctor before performing them.

. You should not lift more than 5 lbs. for at least 2 weeks.

. You should not raise your arms above your shoulders or over bend or stretch your neck.

. Depending on the type of work you do, you may return to work within 4 to 6 weeks.

When would I need to call my doctor?

Call your doctor immediately if you experience any of the following symptoms:

. Bleeding from your incision.

. Redness or increased swelling in the area of the incision.

. A sudden change in vision.

. A persistent temperature of 101 degrees Fahrenheit or higher.

How long does the battery in the impulse generator device last?

What kind of results can you expect after having DBS?

A few weeks after the surgery, a specialist will program the DBS settings to your symptoms.

DBS won’t eliminate symptoms, but more than 70 percent of people with Parkinson’s experience a significant improvement.

You’ll likely be able to cut back on medication. DBS settings can be adjusted without surgery. It may take a few months to find the best combination of medications and DBS settings.

DBS doesn’t make major permanent changes to the brain. The pulse generator can be surgically removed at any time. Talk to your doctor to see if you’re a good candidate for DBS.

The cost of Deep Brain Stimulation Surgery in Iran is $ 9000.