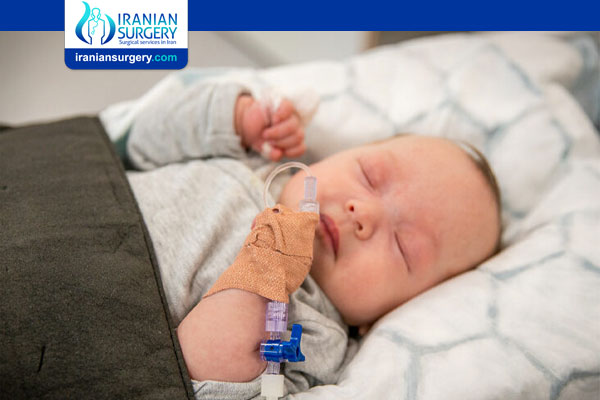 What is Tay-Sachs Disease?

Tay-Sachs disease affects the nerve cells in the brain and spinal cord. Babies with Tay-Sachs lack a particular enzyme, which is a protein that triggers chemical reactions in cells. The lack of the enzyme, hexosaminidase A, causes a fatty substance to collect. The buildup of this substance, GM2 ganglioside, leads to Tay-Sachs symptoms such as muscle weakness.

Tay-Sachs is a genetic condition. It’s caused by changes in a pair of genes inherited from parents. It’s a progressive disease, meaning it gets worse over time. Children born with Tay-Sachs often die by age 4, usually from complications of pneumonia. There’s no cure, with treatment aimed at supporting the child and keeping them comfortable.

Genetic testing is available for couples who may face a higher risk for having a baby with Tay-Sachs. Genetic testing and counseling can help parents-to-be make informed decisions about family planning.

Who is at risk for Tay-Sachs?

People across racial and ethnic groups can carry a genetic change tied to Tay-Sachs disease. But it’s much more common among people of Ashkenazi (Eastern European) Jewish descent.

Other populations with higher numbers of people carrying the disease-causing genetic change include:

. Those with Irish ancestry. Some studies have shown that they have a 1 in 50 chance of carrying such a gene.

How common is Tay-Sachs disease?

For people not from high-risk backgrounds, around 1 in 300 people carry the genetic change (or variant gene) for Tay-Sachs. For people of Ashkenazi Jewish descent:

What are the forms of Tay-Sachs?

There are several forms of Tay-Sachs disease. The type a child has depends on when symptoms develop. Families usually only have one form of the disease. So if a child has infantile Tay-Sachs, it’s not likely that older siblings will develop juvenile or late-onset Tay-Sachs:

. Classic infantile Tay-Sachs: This is the most common form of Tay-Sachs. Children develop symptoms around 6 months.

. Juvenile Tay-Sachs: Children develop symptoms between ages 2 and 5. This form is very rare.

. Late-onset Tay-Sachs: Symptoms can appear during the teen years or early adulthood. They can also develop later as well. This type of the disease may not affect life expectancy. It’s also a very rare form of Tay-Sachs.

Are there similar diseases?

Tay-Sachs happens when both parents had a variant HEXA gene and passed it on. That means neither copy of the baby’s HEXA gene works well. Healthcare providers call this hexosaminidase A deficiency, or hex A deficiency.

What does it mean to be a Tay-Sachs carrier?

A carrier has one working copy of the HEXA gene and one copy with a disease-causing variant. Carriers don’t have the disease or show symptoms, since their bodies can rely on the working gene. But if two carriers have children together, there’s a:

. 50% (1 in 2) chance that the child gets a variant gene from one parent. When this happens, the child will be a carrier but won’t have Tay-Sachs. Since they’re a carrier, they may pass it to their children.

. 25% (1 in 4) chance that the child gets a variant gene from both parents. In this case, the child has Tay-Sachs disease.

What are typical symptoms of Tay-Sachs disease?

Symptoms of the most common form of Tay-Sachs start developing when babies are around 3 to 6 months old. The symptoms continue to progress as the child gets older. Children often don’t meet their developmental milestones.

. Losing ability to do tasks they could do before, such as sitting.

. Not meeting motor milestones (sitting up on their own, pulling up to standing, picking up objects with all their fingers).

. Cherry-red spot in the eye, which providers can see during an eye exam.

At around a year and a half (18 months), the child’s head size starts to grow. When they’re 2 years old, they often have trouble swallowing. They may end up in an unresponsive state. This means they don’t have much brain function. Age of death is usually between 2 and 4 years old. Pneumonia is often the cause of death.

How do other forms of Tay-Sachs progress?

Less often, someone may have another form of Tay-Sachs, also caused by a hexosaminidase A deficiency. These other forms progress differently and may include additional symptoms:

. Children have ataxia (trouble walking) and lack of coordination.

. Other symptoms are like classic Tay-Sachs, though the cherry-red spot in the eye is less common.

. Children may live to the teenage years.

. This condition usually develops before age 10.

. Children don’t lose as many motor skills as with classic Tay-Sachs.

. It affects cognitive and verbal skills later in the course of the disease.

. Children may live to their late teenage years.

. People with this condition experience slow but progressive muscle weakness and wasting.

. They may also have trouble speaking clearly, problems with thinking, memory and concentration, and dementia.

. Up to 40% of people have psychiatric problems, even if they don’t have dementia.

How is Tay-Sachs disease diagnosed?

To diagnose Tay-Sachs disease, healthcare providers do a blood test. They measure the level of hexosaminidase A in the body. In a child with classic Tay-Sachs, this protein is mostly or completely missing. People with other forms of the disease have reduced levels.

A provider may also do an eye exam to see if the child has the classic cherry-red spot in the eye.

How can genetic counseling help families at risk for Tay-Sachs disease?

Genetic counseling is available for:

. Parents and relatives of children with Tay-Sachs.

. People concerned they may be Tay-Sachs carriers because of their ethnicity.

. A genetic counselor explains the screening options (tests that can tell if you’re a carrier).

. You undergo testing, which often includes a blood draw.

. Your genetic counselor interprets and discusses the results with you. The counselor helps you understand what the results mean for you and your family. They can also guide you through any decisions you may need to make.

You can also talk to your provider about:

. Preimplantation genetic diagnosis: Specialists perform tests on embryos before implanting (placing) them in the womb. They do this to see if the embryos carry Tay-Sachs.

When should I do genetic testing for Tay-Sachs?

The best time to do genetic counseling and testing is before pregnancy. That way, you’ll have all the information you need to make the best decisions for you and your family.

Can Tay-Sachs disease be prevented?

How is Tay-Sachs disease treated?

There’s no cure for Tay-Sachs disease. Treatment options aim to control some of the symptoms. For example, your provider may prescribe medication to control seizures. Other treatment measures include providing proper nutrition and hydration. Children are also made as comfortable as possible. Researchers continue to explore more care options.

What’s the outlook for children with Tay-Sachs disease?

Most forms of Tay-Sachs disease are fatal. Children with Tay-Sachs often pass away by age 5. Your child’s care team will talk to you about end-of-life issues. They’ll walk you through decisions about how and where you’d like your child to receive care. They’ll also discuss what you’d prefer to do if your child’s lungs stop working.

How can I take care of my child with Tay-Sachs disease?

The best way to care for your child is to manage their symptoms and keep them comfortable. Your care team will work with you on:

. Breathing help: Many children with Tay-Sachs have breathing problems. They may develop lung infections because they have too much saliva and difficulty swallowing. Different medications, devices or body positioning can help your child breathe easier.

. Nutrition: A speech-language pathologist can help your child learn techniques to eat and drink. As swallowing gets worse, your child may need a feeding tube.

. Seizure control: A neurologist can help you find the right treatment plan for controlling seizures.

. Sensory stimulation: Children with Tay-Sachs have some sensory problems (issues with their five senses). You can try music, shiny mobiles, relaxing scents and soft materials to help stimulate their senses.

Talk to your provider if:

. You’re planning a pregnancy: If you’re thinking about getting pregnant and are at high risk for Tay-Sachs disease, talk to your provider. High risk can mean you are of Ashkenazi Jewish background. It can also mean you or your partner have a history of Tay-Sachs in your families, or one or both of you is a Tay-Sachs carrier.

. You have concerns during pregnancy: If you’re pregnant and think your baby may have Tay-Sachs, reach out to a provider.

. You notice symptoms in your child: If you’re worried your child is showing Tay-Sachs symptoms, such as not reaching milestones on time, talk to your child’s provider.