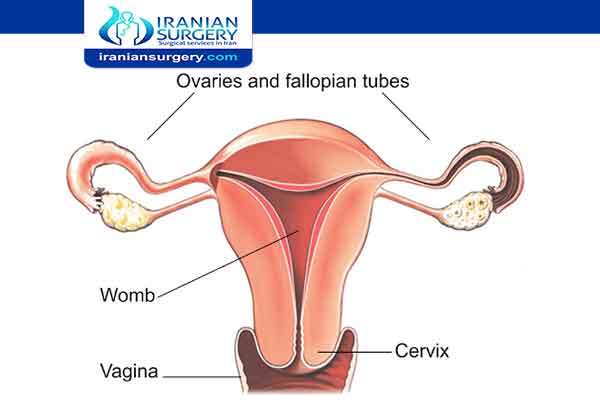 How long does a hysterectomy surgery take?

Who is right candidate for the treatment?

Who is not right candidate for the treatment?

What are the post-treatment guidelines?

How long does it take to recover?

Are the results of the treatment permanent?

What are the alternatives to the treatment?

A Hysterectomy surgery can be carried out for the following reasons: uterine fibroids (the common non-cancerous growths on the uterus muscles), uterine prolapse (a benign condition wherein the uterus drops into the vagina from its usual spot), endometriosis (a condition characterized by the growth of the uterus lining tissues outside the uterus), cancer and hyperplasia ( thickening of the uterus lining resulting in bleeding).

Hysterectomy surgery in Iran is an invasive surgical procedure, performed on women, to remove the entire uterus (womb), or parts of it. With the removal of the uterus and ovaries, the woman experiences premature or early menopause and cannot be pregnant again.

This surgery is normally performed to address different health issues in a woman, such as:

The causes of uterine fibroids include:

The causes of endometriosis include:

Retrograde menstruation, which occurs when the menstrual blood containing endometrial cells instead of flowing out of the body, flows back through the fallopian tubes and into the pelvic cavity.

Transformation of peritoneal cells or cells which line the inner side of the abdomen into endometrial cells.

The causes of pelvic floor disorders include:

The causes of abnormal uterine bleeding include:

Medications such as anticoagulants or anti-inflammatory

Use of Intrauterine device (IUD)

Adenomyosis, a condition in which glands from the endometrium (tissue lining the inner cavity of the uterus) grow into the uterine muscle causing cramps, lower abdominal pressure, and bloating apart from bleeding

The causes of cervical dysplasia include:

Having a partner who has multiple sexual partners

The causes of uterine cancer include:

Due to unopposed estrogen replacement therapy (taking estrogen without progesterone) in middle-aged women.

How long does a hysterectomy surgery take?

A Hysterectomy Surgery usually takes about two hours at the maximum. General anesthesia is administered after which, an IV catheter will be inserted to supply medications and other fluids.

The process of hysterectomy depends on the type of the surgery. In the case of abdominal hysterectomy, first, an incision (either transverse or vertical) of about 7 inches is made in the lower abdomen. The supportive tissues and the blood vessels around the uterus are excised and then the uterus is taken out through the incision. Finally, the incision is closed. A major advantage of this type is that hysterectomy can be performed even if there is scarring or presence of large fibroids. In the case of vaginal hysterectomy, an incision is made around the top of the woman's vagina. After the ligaments, fallopian tubes and the blood vessels are cut off, the uterus is taken out through the vagina. The advantage here is that scarring is minimal with almost no operative pain. The patient can resume normal activities within a month. However, the chances of complications are more in the case of a vaginal hysterectomy. In the case of Laparoscopically assisted vaginal Hysterectomy, the same procedure is followed with a laparoscope assisting the doctor.

A hysterectomy is a major operation with a long recovery time and is only considered after less invasive treatments have been tried.

Who is right candidate for the treatment?

The Hysterectomy surgery is opted for only if other methods haven't been able to provide results. The most common eligibility criteria include:

Heavy periods: Often caused by the presence of fibroids, heavy periods can pose other problems such as menstrual cramps, irritability and nausea.
Uterine prolapse: This is characterized by the uterus dropping into the vagina as a result of the weakening of the supportive ligaments and tissues.
Pelvic pain: This can be because of endometriosis, adenomyosis, incomplete treatment of PIDs and/or fibroids.

Who is not right candidate for the treatment?

There are no non-eligibility criteria as such, however:

The woman should talk it out with the doctor regarding her sex life post hysterectomy as a woman's libido could take a beating and also suffer from sexual dysfunction.
Also, if the woman is running a temperature, the surgery should not be carried out.

The possible side effects include:

Damage to the surrounding organs

Problems related to anesthesia, such as heart or breathing problems
Formation of blood clots in the lungs or legs

What are the post-treatment guidelines?

The basic post-operative guidelines are:

The woman should avoid lifting any heavy weight post-surgery.
The woman must also avoid bathing in tubs for a period of about 5-6 weeks post-surgery.

How long does it take to recover?

For an abdominal hysterectomy, complete recovery can take about a month to 8 weeks. However, for vaginal/laparoscopically assisted vaginal hysterectomies, the downtime is much shorter; about 1-2 weeks.

Are the results of the treatment permanent?

Yes, a Hysterectomy surgery offers a permanent solution to the treatment of fibroids.

What are the alternatives to the treatment?

Some of the alternatives to Hysterectomy include embolization, endometrial ablation, and myomectomy.

Hysterectomy Cost Iran is a reasonable procedure at all the network hospitals and clinics under Select IVF, the medical tourism company for the women who are dealing with the cause of fibroids and require the removal of her uterus. The Hysterectomy Cost Iran is normally 80% less than the cost for the same performed in other developed countries like the USA, UK, Australia, Canada etc.
The Cost of Hysterectomy in Iran is around $2500 including all other expenses whereas the cost of the Hysterectomy performed with the same procedure will cost you between USD 20,000 to USD 25,000 in other developed countries.
The reason behind offering the reasonable Hysterectomy Cost Iran is that the gynecologist in Iran does not want to make any profit out of the couple’s pocket. They wish that women live the healthy lives who all are dealing with chronic pelvic pain, heavy bleeding and chronic pelvic inflammatory disease and the only option for them is the removal of the uterus to relief them from the pain.

Read more about: Pessary for cystocele and rectocele

A hysterectomy is surgery to completely or partially remove the womb (uterus). This is done to relieve symptoms caused by medical conditions affecting the womb. A hysterectomy is a major operation with a long recovery time and is only considered after less invasive treatments have been tried.

What happens to your body when you have a hysterectomy?

A hysterectomy removes only the uterus (supracervical hysterectomy), or the uterus and cervix. It’s important to understand the role of the ovaries in menopause.

Hysterectomy removes the uterus and the cervix. This procedure leaves the ovaries intact, and should not induce menopause.

Read more about: Cystocele and rectocele repair with hysterectomy

You can expect to feel better and stronger each day, but you may need pain medicine for a week or two. It's normal to also have some shoulder or back pain. It is normal to have light vaginal bleeding or a dark brown discharge for about four to six weeks after surgery. You may feel discomfort at the incision site for about four weeks, and any redness, bruising or swelling will disappear in four to six weeks. Feeling burning or itching around the incision is normal.

Can you still get PID after hysterectomy?

Pelvic inflammatory disease (acute or chronic PID), caused by bacterial infection, often from sexually transmitted infections (stis). In both abdominal and vaginal hysterectomy, pelvic infection occurs in approximately 4% of cases. Pelvic cellulitis is an infection of the soft tissues and usually occurs around the third day following surgery.

Can you get pelvic infection after hysterectomy?

The most common clinical manifestations of endometritis and pelvic cellulitis are fever within 24–48 hours of surgery, tachycardia, tachypnea, and lower abdominal pain and tenderness in the absence of any other localizing signs of infection.

Endometriosis can represent with a variety of symptoms including pelvic pain, dyspareunia and pain with defaecation, up to several years after hysterectomy and bilateral salpingo‐oophorectomy. This may occur when all endometriotic tissue is not excised at the time of the initial procedure.

Pelvic inflammatory disease (PID) is an infection of the female reproductive system. If detected early, PID can be treated with antibiotics. However, if the infection spreads it can damage the fallopian tubes and womb and lead to chronic (long-term) episodes of pain. A hysterectomy can treat severe PID by removing the womb and fallopian tubes and taking away the source of pain. If the pain from PID is severe and the woman no longer wants any children, a hysterectomy may be recommended.

Can I still get pregnant if I've had PID?

1What are the side effects of removing the uterus?
If you have your ovaries removed and go into menopause, some of your symptoms may impact your sex life. Sexual side effects of menopause can include: vaginal dryness. pain during sex.
2What happens to your body when you have a hysterectomy?
If the surgeon removes your ovaries along with your uterus it's called a hysterectomy with bilateral oophorectomy. After the procedure, your body goes through what is known as surgical menopause and you may experience hot flashes or other menopause symptoms as if you were going through "the change."
3Is a hysterectomy considered a major surgery?
Laparoscopic Hysterectomy. A hysterectomy is the surgical removal of the uterus. ... A hysterectomy is major surgery, but with new technological advances, the discomfort, risk of infection and recovery time has all been decreased. There are currently three surgical approaches to hysterectomies.
4How long does it take to heal from a hysterectomy?
six to eight weeks Your recovery time at home -- before you can get back to all your regular activities -- will vary depending on the procedure you had. Abdominal hysterectomy. Most women go home 2-3 days after this surgery, but complete recovery takes from six to eight weeks. During this time, you need to rest at home.
5Do hysterectomies cause weight gain?
While a hysterectomy isn't directly linked to weight loss, it may be related to weight gain in some people. ... More research is needed to fully understand the potential link between hysterectomies and weight gain. If you do have your ovaries removed during the procedure, you'll immediately enter menopause.
6Are hysterectomies dangerous?
A hysterectomy is generally very safe, but with any major surgery comes the risk of complications. Risks associated with an abdominal hysterectomy include: Blood clots. Infection.
7Can you have an Orgasim after a hysterectomy?
In most cases, a woman can resume a healthy, fulfilling sex life after she heals. Typically, removing the uterus and cervix does not affect the sensation in the vagina or a woman's ability to have an orgasm. ... Relief from these symptoms may make sex after a hysterectomy more enjoyable than before surgery.
8What are the long term side effects of a hysterectomy?
Some women also may develop long-term bladder problems. Long-term side effects can develop months or years after having a hysterectomy and can last a long time. ... Short-term side effects of hysterectomy include: pain. bleeding. infection. pneumonia. bladder problems. constipation. blood clots in the legs or in the lungs.
9How painful is a hysterectomy?
After a hysterectomy, you might feel relief because you no longer have heavy bleeding or pelvic pain. ... But for some women, heightened sexual satisfaction occurs after hysterectomy — perhaps because they no longer have pain during intercourse. You might feel a sense of loss and grief after hysterectomy, which is normal.
10Can you still have a period without a uterus?
Because your uterus is removed, you no longer have periods and cannot get pregnant. But your ovaries might still make hormones, so you might not have other signs of menopause. ... If both ovaries are removed during the hysterectomy, you will no longer have periods and you may have other menopausal symptoms right away.