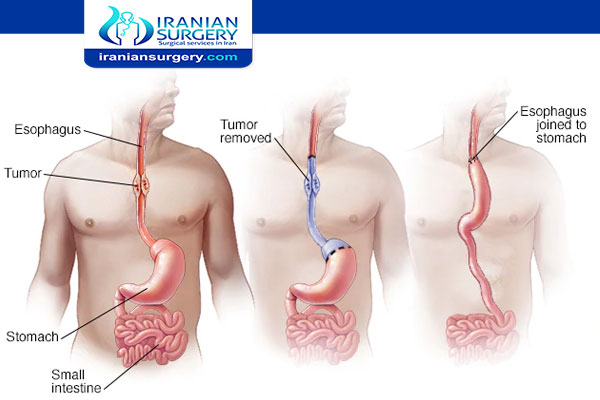 What treatments you receive for esophageal cancer are based on the type of cells involved in your cancer, your cancer's stage, your overall health and your preferences for treatment.

Surgery to remove the cancer can be used alone or in combination with other treatments. Operations used to treat esophageal cancer include:

Esophageal cancer surgery carries a risk of serious complications, such as infection, bleeding and leakage from the area where the remaining esophagus is reattached to the stomach.

Surgery to remove your esophagus can be performed as an open procedure using large incisions or with special surgical tools inserted through several small incisions in your skin (laparoscopically). How your surgery is performed depends on your individual situation and your surgeon's particular approach to managing it.

Treatments for esophageal obstruction and difficulty swallowing (dysphagia) can include:

Chemotherapy is drug treatment that uses chemicals to kill cancer cells. Chemotherapy drugs are typically used before (neoadjuvant) or after (adjuvant) surgery in people with esophageal cancer. Chemotherapy can also be combined with radiation therapy. In people with advanced cancer that has spread beyond the esophagus, chemotherapy may be used alone to help relieve signs and symptoms caused by the cancer.

Radiation therapy uses high-powered X-ray beams to kill cancer cells. Radiation typically will come from a machine outside your body that aims the beams at your cancer (external beam radiation). Or, less commonly, radiation can be placed inside your body near the cancer (brachytherapy).

Radiation therapy is most often combined with chemotherapy in people with esophageal cancer. It's typically used before surgery, or occasionally after surgery. Radiation therapy is also used to relieve complications of advanced esophageal cancer, such as when a tumor grows large enough to stop food from passing to your stomach. Treatment can last from two to six weeks of daily radiation treatments.

Side effects of radiation to the esophagus include sunburn-like skin reactions, painful or difficult swallowing, and accidental damage to nearby organs, such as the lungs and heart.

Read more about: Gingivectomy In Iran

In most cases, esophageal cancer is a treatable disease, but it is rarely curable. The overall 5-year survival rate in patients amenable to definitive treatment ranges from 5% to 30%. The occasional patient with very early disease has a better chance of survival. Patients with stage I esophageal cancer can be treated with curative intent using either surgery or chemotherapy and radiation therapy. Currently, the chemotherapy and radiation therapy approach is usually reserved for patients who cannot tolerate surgery.

Stage III esophageal cancer invades through the wall of the esophagus and has spread to the lymph nodes and/or invaded adjacent structures.

A stage III esophageal cancer tumor has grown beyond the esophagus and may now extend into nearby tissues or organs. The cancer may or may not have spread to nearby lymph nodes.