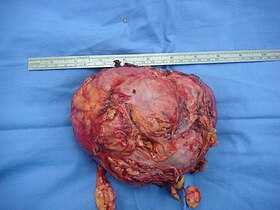 Surgery of the thyroid gland constitutes the bulk of endocrine surgical procedures worldwide. This may be done for a variety of conditions, ranging from benign multinodular goiter to thyroid cancer.In the United Kingdom it was developed as a separate specialty from general surgery at the Royal Postgraduate Medical School by Dick Welbourne and John Lynn. Operations involve removal of the thyroid gland (thyroidectomy) either as a part of the gland (lobectomy or hemithyroidectomy), or the whole gland (total thyroidectomy). Incomplete resections (sub-total or near total thyroidectomy) are also infrequently performed, but are disfavored by most surgeons.

Removal of the parathyroid gland(s) is referred to as parathyroidectomy, usually performed for primary hyperparathyroidism.

Diseases of the endocrine pancreas occur very infrequently; these include insulinomas, gastrinomas etc. Surgery for these conditions range from simple tumor enucleation to more larger resections.

Surgeons and physicians have advanced endocrine surgery by careful description of unusual patients and families with endocrine syndromes…Surgeons have also improved techniques for preparation for surgery and methods…Endocrine surgery is generally well developed. Endocrine surgery has developed as a sub-specialty surgical category because of the technical nature of these operations and the associated risks of operating in the neck. In Surgery: Basic Science and Clinical Evidence, the book the efficacy prior research:

In the 1970s, a specialty training program at Hammersmith Hospital was the primary location for early work in training a large number of surgeons. It is well established that complications are much less common if performed by surgeons who do at least 100 thyroid operations per year. In the United Kingdom most thyroid surgery is performed by surgeons doing less than 20 thyroid operations per year. Permanent damage to both voice box nerves is an extreme rarity and needs in most cases a permanent tracheotomy.