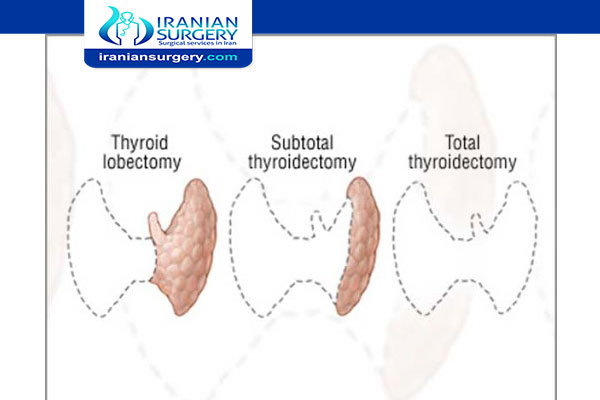 The various types of thyroidectomy include:

. Partial Thyroid Lobectomy (a rare procedure) — only part of one thyroid lobe is removed. This operation is not performed very often because there are not many conditions which will allow this limited approach. Additionally, a benign lesion must be ideally located in the upper or lower portion of one lobe for this operation to be a choice.

. Thyroid lobectomy — All of one thyroid lobe is removed. This is typically the "smallest" operation performed on the thyroid gland. It is performed for solitary dominant nodules, which may be thyroid cancer or those which are indeterminate following fine needle biopsy. This surgery may also be appropriate for follicular adenomas, solitary hot or cold nodules, or goiters which are isolated to one lobe (not common).

. Thyroid lobectomy with isthmusectomy — all of one thyroid lobe is removed, together with the section between the two lobes (called the thyroid isthmus). This simply means removal of a thyroid lobe and the isthmus (the part that connects the 2 lobes). This removes more thyroid tissue than a simple lobectomy, and is used when a larger margin of tissue is needed to assure that the "problem" has been removed. Appropriate for those indications listed under thyroid lobectomy as well as for Hurthle cell tumors, and some very small and non-aggressive thyroid cancers.

. Subtotal thyroidectomy — One thyroid lobe, the isthmus and part of the second lobe are removed. This operation is typical for small, non-aggressive thyroid cancers. Also a common operation for goiters that are causing problems in the neck or even those which extend into the chest (substernal goiters).

. Total thyroidectomy — the entire thyroid gland is removed. It is the operation of choice for all thyroid cancers which are not small and non-aggressive in young patients. Many surgeons prefer complete removal of thyroid tissue for all the different types of thyroid cancer.

Iranian surgery is an online medical tourism platform where you can find the best Surgeons and hospitals in Iran. The price of a Thyroidectomy surgery in Iran can vary according to each individual’s case and will be determined by the type of treatment you have and an in-person assessment with the doctor. So if you are looking for the cost of Thyroidectomy surgery in Iran, you can contact us and get free consultation from Iranian surgery.

1Are the parathyroid glands removed with a thyroidectomy?
Thyroidectomy: surgery to remove the entire thyroid gland. ... Hypoparathyroidism — low calcium levels due to decreased secretion of parathyroid hormone (PTH) from the parathyroid glands next to the thyroid. This can occur as a result of damage to the glands during thyroid surgery and usually resolves
2Is thyroidectomy a major surgery?
A total thyroidectomy is a procedure that removes your entire thyroid gland. ... Total thyroidectomy procedures can take a long time to perform—3 to 4 hours, in most cases. Your surgeon makes a small incision in the front of the neck, and he or she must carefully work around vital structures, such as the vocal nerves
3Where is the incision for a thyroidectomy?
A thyroidectomy is traditionally a minimally invasive surgery performed through a small horizontal incision in the front of the neck.
4Why would you need a thyroidectomy?
Thyroidectomy is the removal of all or part of your thyroid gland. ... Thyroidectomy is used to treat thyroid disorders, such as cancer, noncancerous enlargement of the thyroid (goiter) and overactive thyroid (hyperthyroidism).
5Does your voice change after thyroid surgery?
Voice change — is a known complication after thyroid surgery. There are two sets of nerves near the thyroid gland that help control the voice. ... Damage to a recurrent laryngeal nerve can cause you "to lose your voice". The chance that one of the recurrent laryngeal nerves will be permanently damaged is about 1%
6What foods to avoid if you have no thyroid?
Diet. Goitrogenic foods, such as Brussels sprouts, broccoli, and kale, can interfere with the body's ability to make active thyroid hormones. But, if you do not naturally make these hormones at all—as is the case if you do not have a thyroid gland—you don't need to be concerned about them
7Can you live a normal life after thyroidectomy?
In most cases, these supplements can be stopped within several weeks, once the parathyroid glands heal and their normal function returns. Patients require lifetime thyroid hormone replacement when the entire thyroid gland (both lobes) is removed, and sometimes when even just one lobe is removed
8How long are you in the hospital after thyroid surgery?
A: You will be admitted to the hospital on the morning of your surgery. Some patients are able to go home the same day after about 4-8 hours in the recovery room, depending on the extent and timing of the surgery. Others stay for one night in the hospital.
9Can you live a normal life without a thyroid?
Life Without a Thyroid. The thyroid gland is an important element or one's overall health. Hormones produced by the thyroid influence nearly every cell in the body. ... Although it can be challenging, those without a thyroid can live healthy lives through proper treatment and support
10Can you die from a thyroidectomy?
Although very uncommon, death may occur after thyroid resection. ... The median time from surgery to death was 14 days (range 1-85). CONCLUSIONS: Death after thyroidectomy is very uncommon, and most often results from a combination of advanced age, giant goiters, and upper airway complications