What Is the Success Rate of Radiation Therapy? 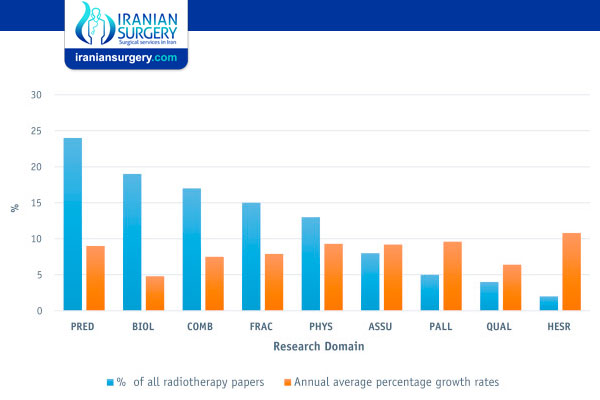 What Is the Success Rate of Radiation Therapy?

Radiotherapy or Radiation Therapy is a treatment involving the use of high-energy radiation. It's commonly used to treat cancer. Almost half of all people with cancer have radiotherapy as part of their treatment plan. Radiotherapy is also sometimes used to treat benign (non-cancerous) tumors and other conditions, such as thyroid disease and some blood disorders.

Despite the side effects, radiotherapy can be a highly effective treatment for cancer. 4 out of every 10 cancer cures include radiotherapy as part of the treatment plan. However, radiotherapy doesn't cause cancerous tumors to shrink immediately and it can take some time for the beneficial effects to become apparent. These effects depend on the type of cancer you have, other treatments that may be given alongside it (such as chemotherapy or surgery) and how advanced the tumor is when treatment begins.

In this article we will take a look at the success rate of radiation therapy for treating lung, breast and prostate cancer.

The American Cancer Society states that breast cancer is the second most common cancer in females, behind skin cancer. Many factors will determine the outlook for a person with breast cancer, including their age and overall health, as well as the stage of cancer at diagnosis. However, the correct treatment of this disease can increase an individual’s chances of survival. Doctors often recommend radiation therapy, which they may use alone or in combination with other treatments, depending on the cancer type and stage.

Individuals often have radiation therapy following surgery to remove breast cancer. Studies show that the risk of cancer reoccurring is much higher if doctors do not use radiation to treat the person. When a person does undergo radiation therapy, the risk of recurrence is 5–10% compared with 20–40% in those who do not receive this treatment.

Radiation therapy is a common treatment for lung cancer, but can it cure the disease? There's not a simple yes or no answer. The success rate of radiation depends on the type used, what it is being used for, the stage of the cancer, and much more. In early-stage lung cancer, radiation may be tried as a curative approach, especially in people who are not expected to do well with surgery. While the term "cure" is rarely used, many people will remain cancer free.

With cancers that are large or have spread to nearby lymph nodes, radiation may be used to reduce the size of the tumor so that surgery can be done or to destroy any remaining cancer cells after surgery. In advanced disease, radiation is most often used as a palliative treatment—a treatment designed to relieve symptoms and improve quality of life but not as a cure or to extend life.

It's helpful to review the survival rates of the different types of lung cancer when looking at the potential benefits of radiation. When reviewing these, however, it's important to note that no two lung cancers are alike. Even if two people develop cancers of the same type and same stage, they may have considerably different outcomes depending on many factors, such as the gene mutations present in the tumor.

In addition, there are limitations to using statistics, including that people aren't statistics. There is no "average" person who has an "average" journey with lung cancer. Perhaps the most important limitation in discussing five-year survival rates with lung cancer is that treatments are improving and rapidly changing. The treatment you receive may not have existed five or 10 years ago, so the statistics may not be relevant to your case.

For example, for decades there was relatively little progress in lung cancer treatment. This began to change quickly, starting around the year 2010, first with targeted therapies and then immunotherapy. There was a new drug available every few months. Even during the height of the COVID-19 pandemic, in May of 2020, six new medications or combinations of medications were approved to treat lung cancer. If you receive one of these treatments, statistics from 2010 to 2016 may mean little. Non-small cell lung cancer is broken down into four stages, although three are important when discussing statistics, which are:

. Local disease: Near where the cancer started in the lungs

. Regional: Spread to nearby tissues or lymph nodes

Small cell lung cancer is broken down into two primary stages—limited and extensive. Survival rates are also described based on whether the cancer is localized, has spread to nearby tissues, or is metastatic.

The 5-year survival rate using this treatment is 98.8% overall. When compared to other common treatment options such as surgery or brachytherapy, external-beam was as effective and, in some cases, more effective.

A/Prof Tom Shakespeare, Radiation Oncologist at the North Coast Cancer Institute, led the eight-year study comparing the effectiveness of external-beam radiation therapy with other common treatment options such as surgery or brachytherapy.

Dean of the Faculty of Radiation Oncology, Dr Dion Forstner, said the study showed that radiation therapy was a sophisticated and highly effective treatment.

“We know that radiation therapy is a highly effective treatment for all cancers, it is involved in around 40% of cancer cures. Critically, this study examines the use of Intensity Modulated Radiation Therapy, an advanced technique of delivering radiation therapy in precise doses. Results such as the ones shown in this study show that Intensity Modulated Radiation Therapy is a critical part of modern radiation therapy. Unfortunately, the Federal Government has been dragging their feet on adequate funding for this treatment. The Medical Services Advisory Committee has again deferred making a decision on funding this treatment appropriately under the Medicare Benefits Schedule. This is a world-class treatment that has already been accepted internationally. At present 1 in 4 patients in the UK that receive radiation therapy are treated with this technique but in Australia that is as low as 1 in 10 patients only,” Dr Forstner said.