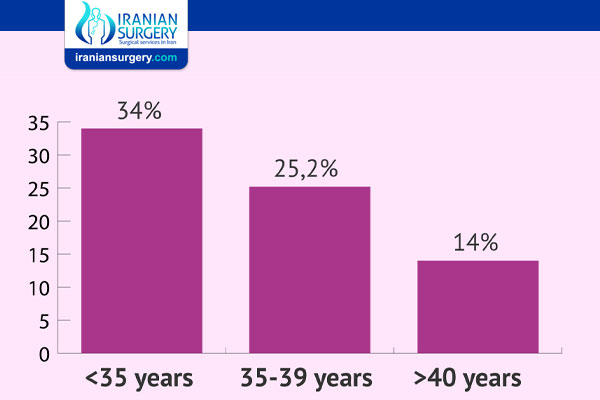 If you are considering in vitro fertilization (IVF), you may want to know what the IVF success rates are. Most people don’t have a baby after a single round of IVF, but the chances of success increase the younger you start, new data suggests. IVF is a technique that helps people get pregnant. It involves fertilizing a human egg with sperm in a laboratory and implanting the fertilized egg into the uterus.

People who may have fertility complications, same-sex couples, or individuals looking to conceive alone often choose IVF to conceive. IVF does not guarantee conception and people can undergo multiple rounds of IVF to increase the chance of success. However, the costs of multiple IVF cycles can be prohibitive for some, and the chance of success differs across age groups. But what are those chances?

Now, new research from the University of New South Wales, funded by the Victorian Assisted Reproductive Treatment Authority (VARTA), paints a more complete picture of chance of success for women of different ages. The researchers tracked thousands of women who started IVF in 2016 and followed them through to mid-2020.

IVF Success Rates Across Ages according to VARTA

They found that women who started IVF before 30 had a 43% chance of having a baby after one cycle of IVF, 59% chance after two cycles, and 66% chance after three cycles. In other words, 66% of women under 30 who underwent 3 or less cycles of IVF had a baby.

Another way of looking at it is that, for women under 30, their first round of IVF had a 43% success rate, their second round increased chance of conception a further 16 percentage points, and a third round increased overall chance of success by a further 7 percentage points. For women who started IVF at 35, there was a 40% chance of a baby after one cycle, 54% chance after two rounds, and 61% after three rounds.

At 40, the results were considerably reduced: a 13% chance of a baby after one round, 21% after two rounds, and 25% after three rounds. This highlights that IVF success rates aren’t the same for every round. If it isn’t successful in the first round, it is less likely to be successful in the second round, although overall chances of conception increase when both rounds are measured together.

VARTA CEO Anna MacLeod explains that while the goal for everyone who starts IVF is to have a baby – preferably on the first attempt – this research offers people a realistic expectation of what is possible and how long it might take. “Knowing that most people need more than one stimulated cycle for a reasonable chance of success and that IVF births are less common the older you get is helpful for planning,” she says.

This is especially important because IVF involves injecting hormones every day for two weeks to produce more eggs than usual, surgical removal of eggs, and laboratory labor costs. Together, one single round can be strenuous on the body and can take up to 40 days or longer. Additionally, a new IVF round should not be done two months in a row without a menstrual cycle in between them, so the 4-6 weeks is the minimum waiting period between a negative pregnancy test and a new cycle.

“If you want to have a child in future, learn more about your fertility and factors that can affect it so you can plan ahead. There are a lot of things you can do now to improve your chance of a healthy pregnancy and baby in future,” says Dr Karin Hammarberg of VARTA.

She also notes that this data just represents averages of IVF success and age, but that there may be other factors that contribute to success. For example, if a woman in her late 30s or 40s received a donor egg from a younger woman, the chance of IVF success was the same as that of the younger donor’s age group.

IVF Success Rates by Age according to CDC and SART

You can find IVF success rates on the websites for the Centers for Disease Control and Prevention (CDC) and the Society for Assisted Reproductive Technology (SART). National rates, along with statistics for individual clinics, are available on these sites. Success rates are generally reported according to the woman's age. With age, IVF success rates tend to decline unless donor eggs are used.

National data was collected by the CDC for 2017 representing IVF success rates using non-donor eggs, per egg retrieval (not per cycle). In other words, these are the odds of a live birth after one egg retrieval using either freshly retrieved eggs/embryos during the cycle ​or after a frozen embryo transfer cycle.

. For women younger than 35, the percentage of live births per egg retrieval is 54.5%.

. For women ages 43 and up, the percentage of live births per egg retrieval is 4.2%.

Unfortunately, IVF success declines significantly after age 40. For this reason, most women ages 40 and up use donor eggs. IVF success rates using donor eggs are not as dependent on the woman's age.

When using donor eggs, the percentage of live births per cycle is:

IVF success depends on a number of factors, some of which you have little control over, and some of which can be improved through healthy lifestyle changes. SART has created a patient predictor tool that can offer slightly more personalized odds. It's free and easy to use. The tool assumes you have never attempted IVF. The following factors are considered when calculating your odds:

. Whether you plan to use your own eggs or donor eggs

. Your cause for infertility (if known)

Univfy has developed a similar tool, which isn't free but takes into account more data than the SART predictor. Univfy's tool can be used if you have previously undergone IVF. Input personal fertility data, including diagnosis, age, weight, and previous success (or not) with fertility treatments to get your current odds.

Iranian surgery is an online medical tourism platform where you can find the best doctors and fertility specialists in Iran. The price of PGD in Iran can vary according to each individual’s case and will be determined by an in-person assessment with the doctor.

For more information about the cost of PGD in Iran and to schedule an appointment in advance, you can contact Iranian Surgery consultants via WhatsApp number 0098 901 929 0946. This service is completely free.