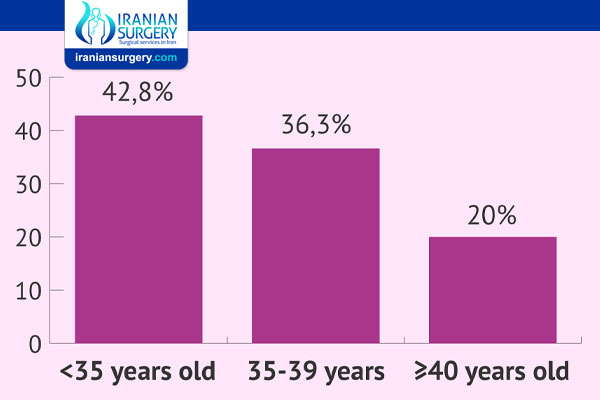 Over the past few decades, the use of ICSI has increased dramatically in fertility clinics. Although it was originally intended for male-factor infertility, it is now used widely even when semen characteristics are normal. Is there a benefit in using ICSI rather than conventional IVF?

In this article, we will zoom in on the success rates of ICSI in different age groups and how the rates compare to conventional IVF.

According to the 2015 National Summary Report released by CDC, live birth rates with ICSI treatment decrease as maternal age increases, regardless of the presence of male factor infertility. This trend is expected with all fertility treatments, due to significantly declined egg quality with advancing maternal age.

Since each couple is unique in the cause of infertility, the answer as to whether ICSI or conventional IVF is more beneficial could vary. A retrospective cohort study published in 2015 is the most comprehensive study so far comparing the two strategies with different infertility factors, which will be the focus here1. A few other smaller-scale studies will also be discussed.

Note that all of the studies discussed here are retrospective studies. They either excluded frozen and donor eggs, or contained predominantly fresh, non-donor eggs.

Currently, a randomized clinical trial is underway and due for completion by December 2020. The outcome of such randomized trial is expected to offer more definitive answers as to whether ICSI is more or less beneficial compared to IVF for non-male factor infertility.

The percentage of cycles canceled between egg retrieval and embryo transfer is an indication of failed fertilization. This figure is halved with ICSI as compared to conventional IVF, indicating that it can indeed improve fertilization when the sperm is at fault. However, there are no differences in pregnancy, miscarriage or live birth rates between conventional IVF and ICSI, indicating overall similar success rates.

Among couples with non-male factor infertility, the use of ICSI is not supported by evidence. The implantation rate, pregnancy rate and live births are lower with ICSI compared to conventional IVF. The miscarriage rate is also slightly higher with ICSI1.

Among live births, the risks for multiple live birth, preterm delivery and low birth weights are similar between IVF and ICSI.

In the 2015 National Summary Report released by CDC, conventional IVF had higher success rates compared to ICSI in non-male infertility cases before the age of 43. After 43, both treatments have very low success rates due to significantly declined egg quality.

Success rates with conventional IVF vs ICSI, adjusted by age (no male factor)