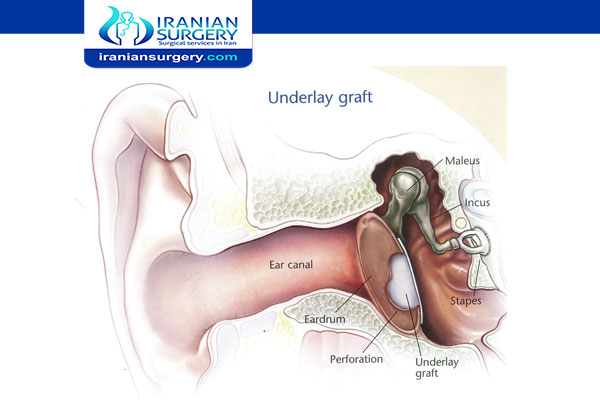 How long does tympanoplasty surgery take?

How painful is a tympanoplasty?

Why is Tympanoplasty done?

What happens if tympanoplasty fails?

Patch Tympanoplasty is the most minor of the procedures. It is performed in the office in adults and under anesthesia in children. The edges of the hole are irritated with an instrument, and a biologic tissue paper patch is placed over the hole and held on with a drop of blood from the irritation

Fat Tympanoplasty is another minor procedure that can be performed in the office. The ear lobe is frozen, a small amount of fat is removed, the eardrum is irritated and the fat is placed through the hole. The earlobe is sutured.

Medial Tympanoplasty is performed in the operating room under local or general anesthesia. It can sometimes be performed working through the ear canal, but is usually performed via an incision behind the ear. Incisions are made in the ear canal and the remnant of the eardrum is lifted up. The ear canal may be widened. A tissue graft from the ear muscle (fascia) or cartilage is obtained and is slid under the eardrum. Packing is placed in the middle ear and ear canal to hold the graft and drum against each other to heal.

Lateral Tympanoplasty is performed under general anesthesia in ears with large holes, holes in the front part of the eardrum or when previous surgeries have failed to close a perforation. It is performed through an incision behind the ear and the ear canal is widened. Some or most of the original eardrum is removed. A fascia graft is harvested, and used to create a new eardrum. A small skin graft is often taken from behind the outer ear and used to line the surface of the widened ear canal to get the ear canal to heal quickly.

How long does tympanoplasty surgery take?

How painful is a tympanoplasty?

There is usually only mild pain following ear surgery. Some discomfort may be felt for the first 24 hours if a pressure dressing is applied to the ear. Once this is removed, however, most discomfort subsides. There may be occasional fleeting, stabbing pain in the ear up to one week after surgery.

Read more about : how to fix a deviated septum without surgery?

Why is Tympanoplasty done?

Doctors do a tympanoplasty when the eardrum (or tympanic membrane) has a hole that doesn't close on its own. It is done to improve hearing and prevent water from getting into the middle ear.

Kids can get a hole in an eardrum from:

Most of the time, the eardrum can repair itself. So at first, doctors closely watch a hole in a child's eardrum rather than fix it right away. They might wait years to repair one in a very young child. This lets the ear develop enough to help prevent complications after the surgery. Surgery might also wait if a child has ongoing problems with ear infections.

What happens if tympanoplasty fails?

In most cases, eardrum repairs are very successful. More than 90 percent of patients recover from tympanoplasty with no complications. The outcome of the surgery may not be as good if the bones of your middle ear need to be repaired in addition to your eardrum. Failure of tympanoplasty can occur either from an immediate infection during the healing period, from water getting into the ear, or from displacement of the graft after surgery. Most patients can expect a full “take” of the grafted eardrum and improvement in hearing.

Read more about: Steps of tympanoplasty

1How is a tympanoplasty performed?
Medial Tympanoplasty This is performed in the operating room under local or general anesthesia. It can sometimes be performed working through the ear canal, but is usually performed via an incision behind the ear. ... A tissue graft from the ear muscle (fascia) or cartilage is obtained and is slid under the eardrum
2How painful is a tympanoplasty?
Tympanoplasty in children can take 1 to 2 hours. ... Your child may have bloody discharge or drainage from the ear canal for a few days after surgery. This is normal and is no cause for alarm. Ear pain and soreness are also common after surgery.
3How do you sleep after tympanoplasty?
RESUMING ACTIVITIES - It is advisable to sleep with the head of the bed elevated for the first week after surgery. This helps to minimize swelling behind the ear and in the middle ear cavity. The head of the bed may be elevated by sleeping on two or three pillows or by placing several pillows under the mattress.
4How long is recovery after ear surgery?
It usually takes about 2 months for the ear canal to fully heal before water is allowed back into the ear. Because of swelling, fluid, and packing placed in the ear canal after surgery, hearing will be worse right after surgery
5How long after ear surgery Can you swim?
heart bypass surgery – you can swim after 3 months. cataract surgery – you should avoid swimming for 4 to 6 weeks. appendectomy (after having appendicitis) – you can swim after your stitches have been removed, the wound has healed and you have made a full recovery (usually at least 2 weeks)
6How do you wash your hair after ear surgery?
You may shampoo your hair 48 hours after surgery carefully. Keep the ear canal dry with Vaseline impregnated cotton balls. Gently dry the hair with a towel and avoid vigorous rubbing over the incision area
7What happens if Tympanoplasty fails?
Your graft may fail or you may develop another tear in your eardrum. Without surgery, the tear may get bigger. Your hearing loss may get worse and lead to permanent hearing loss. You may have chronic ear infections.
8What should I do after ear surgery?
No heavy lifting, strenuous activity, contact sports, or gym class for 4 weeks after surgery. Keep your child's head elevated on 1-2 pillows when lying down for 1 week following surgery. Help your child remove the entire ear bandage 2 days after surgery until you see the ear and the skin incision (if one was made)
9How long does dizziness last after ear surgery?
Usually this steadily resolves over 6-12 weeks. After the surgery you may find your balance is affected for a short while. Sometimes people get very dizzy immediately after and feel sick
10Can Tympanoplasty restore hearing?
HEARING LOSS – A tympanoplasty is performed to help restore normal hearing. However, some hearing loss (more common with ossiculoplasty) may still be present after the procedure. An operation is termed successful if the hearing is restored within 10-15 decibels of normal