Low-level laser therapy (LLLT) is a form of medicine that applies low-level (low-power) lasers or light-emitting diodes (LEDs) to the surface of the body. Whereas high-power lasers are used in laser medicine to cut or destroy tissue, it is claimed that application of low-power lasers relieves pain or stimulates and enhances cell function.

The effects of LLLT appear to be limited to a specified set of wavelengths of laser, and administering LLLT below the dose range does not appear to be effective.

Despite a lack of consensus over its validity, some studies suggest that LLLT may be modestly effective, in relieving short-term pain for rheumatoid arthritis,osteoarthritis, acute and chronic neck pain, tendinopathy, and possibly, chronic joint disorders. The evidence for LLLT being useful in the treatment of low back pain, dentistry, and wound healing is unclear.

Various LLLT devices have been promoted for use in treatment of several musculoskeletal conditions including carpal tunnel syndrome (CTS), fibromyalgia, osteoarthritis, and rheumatoid arthritis. They have also been promoted for temporomandibular joint (TMJ) disorders, wound healing, smoking cessation, and tuberculosis. While these treatments may briefly help some people with pain management, evidence does not support claims that they change long term outcomes, or that they work better than other, low tech ways of applying heat.

LLLT appears to be effective for preventing oral mucositis in recipients of a stem cell transplant with chemotherapy.

Research is ongoing about the mechanism of LLLT. The effects of LLLT appear to be limited to a specified set of wavelengths of laser, and administering LLLT below the dose range does not appear to be effective. Photochemical reactions are well known in biological research, and LLLT make use of the first law in photochemistry (Grotthuss-Draper law): light must be absorbed by a chemical substance in order for a photochemical reaction to take place. In LLLT that chemical substance is representated by the respiratory enzyme cytochrome c oxidase which is involved in the electron transport chain in mitochondria, which is the generally accepted theory. 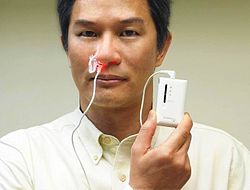 Demonstration of LLLT with intranasal irradiation

LLLT may be useful in the treatment of both acute and chronic neck pain. In 2013, however, a systematic review and meta-analysis of LLLT for neck pain indicated that the benefit was not of significant importance and that the evidence had a high risk of bias.

There are tentative data that LLLT is useful in the short-term treatment of pain caused by rheumatoid arthritis, and possibly chronic joint disorders. While it does not appear to improve pain in temporomandibular disorders, it may improve function. Evidence for usefulness in osteoarthritis is poor.

Evidence does not support a benefit in delayed-onset muscle soreness. It may be useful for muscle pain and injuries.

Similarly, the use of lasers to treat chronic periodontitis and to speed healing of infections around dental implants is suggested, but there is insufficient evidence to indicate a use superior to traditional practices. There is tentative evidence for dentin hypersensitivity. It does not appear to be useful for orthodontic pain LLLT might be useful for wisdom tooth extraction (complications) and oral mucositis.

LLLT has been studied for traumatic brain injury (TBI) and stroke among other conditions. When applied to the head it is known as transcranial photobiomodulation or transcranial low level light therapy.

LLLT has been studied as a way to reduce pain and swelling in breast-cancer related lymphedema. Stephen Barrett, writing for Quackwatch, concluded in 2009 there was evidence to support LLLT use for temporary pain relief, but “there’s no reason to believe that they will influence the course of any ailment or are more effective than other forms of heat delivery.” Barrett’s position was unchanged as of 2017.

An ongoing area of research is the application of LLLT for increasing cell proliferation, including stem cells.

Veterinary clinics use cold laser devices to treat a wide variety of ailments, from arthritis to wounds, on dogs and cats. Very little research has been done on the effects of this treatment on animals. Currently, laser therapy equipment is aggressively marketed to veterinarians as a supposedly powerful therapeutic tool and revenue generator. Brennen McKenzie, president of the Evidence-Based Veterinary Medicine Association, has stated that “research into cold laser in dogs and cats is sparse and generally low quality. Most studies are small and have minimal or uncertain controls for bias and error”. While allowing that some studies show promising results, he reports that others do not. While believing that there is enough evidence to warrant further study, he concludes that there is not enough evidence to support routine clinical use of cold laser in animals.

If vets want to try this therapy, they have an obligation to be clear with client that the risks and benefits have not been established and that the treatment is essentially experimental. There is nothing wrong with using such a treatment given appropriate informed consent, but the aggressive marketing of laser equipment to vets as a profitable treatment is ethically questionable given the lack of good evidence that it is a truly safe and effective treatment for any condition.