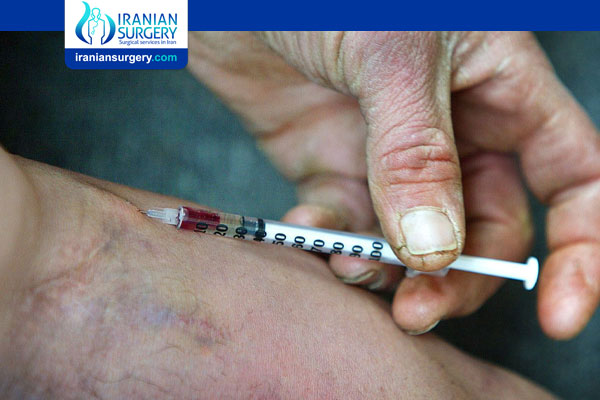 What Is Krokodil (Desomorphine)?

Desomorphine, known by the street name krokodil, is an opioid derivative of codeine. Like heroin and other opioids, it has a sedative and analgesic effect and is highly addictive. Those who inject these caustic agents into their veins can develop extreme skin ulcerations, infections, and gangrene -- a discolored (green, grey, black) scale-like skin that resembles a crocodile, hence the street name “krokodil". Krokodil is also called “Russian Magic”, referring to its short duration of opioid intoxication (euphoria).

Krokodil is reported to contain desomorphine, a synthetic morphine analogue synthesized in the 1930s. Due to illicit, home-based manufacturing it may contain other unknown ingredients. It is typically abused via the intravenous (IV) route. Desomorphine is a Schedule I substance in the U.S., meaning it has a high abuse potential with no accepted medical use.

Krokodil also refers to chlorocodide, a codeine derivative in the synthetic path to desomorphine. Homemade versions of the drug start with codeine, and can be ‘cooked’ similar to illicit methamphetamine (“meth”) production. Organic solvents such as gasoline, paint thinner, or lighter fluid, iodine, hydrochloric acid, and red phosphorus (from matches) are used in homemade synthesis. These dangerous chemicals are not always fully “cooked” out of the concoction when used to make illicit krokodil.

According to the DEA, in 2004 the National Forensic Laboratory Information System (NFLIS) identified two samples of desomorphine. Since that time, no other exhibits have been identified as desomorphine to date. It had previously been used medically in Switzerland under the brand name Permonid.

How Is Krokodil Used?

. Krokodil is typically used by the intravenous (IV) route.

. According to reports, the drug is fast-acting within 2 to 3 minutes and 10 to 15 times more potent than morphine, and three times as toxic. In fact, when the toxic chemicals are removed, quite often what is left is desomorphine, a compound very similar to heroin.

. After a rapid onset, the euphoric effects may last less than two hours. Due to the short duration of the “high”, many users find themselves in a rapid repetition of drug use to avoid withdrawal symptoms that resemble heroin.

. Due to the drug’s rapid onset but short duration of action and frequent administration, quick physical dependence may occur.

What Are the Side Effects of Krokodil?

There have been multiple unconfirmed news reports of users in the U.S. who have had extreme skin ulcerations, infections and scale-like skin due to use of krokodil. The most common complications reported thus far from krokodil injection appears to be serious vein damage, soft tissue infections, necrosis and gangrene.

According to reports, the localized soft tissue effects occur relatively quickly after the use of krokodil. There have been news reports of amputations. It appears that ulcerations may occur locally at the drug injection site or also at remote areas of the body. There may be further organ or central nervous system damage.

Reported health hazards due to krokodil injection use include:

. need for skin grafts and surgery

. blood-borne virus transmission (such as HIV and HCV due to needle sharing)

What Is the Extent of Krokodil Use?

Krokodil has been synthesized in Russia for over a decade. About one million people in Russia use krokodil according to the New York State Office of Alcoholism and Substance Abuse Services. Krokodil goes by the names of “Cheornaya” in Russia and “Himiya” in Ukraine.

According to the head of the Russian Federal Drug Control Service, the amount of krokodil seized in Russia increased 23-fold between 2009 and 2011. Krokodil use has also been reported in other countries including the Ukraine, Georgia, Kazakhstan, Germany and Norway.

Previously in Russia and Ukraine, Afghan heroin was the drug of choice when making homemade injectables. Due to a possible Afghan opium crop fungal disease in 2010, the production of opium was 48% lower than the previous year. Therefore, in Europe and Asia, users turned to over-the-counter medications that contain codeine for pain or cough as an ingredient for krokodil.

Codeine is preferred instead of heroin because of lower costs and ease of availability. However, the effects and chemical reactions of the medications also in these codeine products (such as acetaminophen or terpin hydrate) are all unknown when mixed for illegal drug use. In some former Soviet Union regions, officials attribute at least half of all drug-related deaths due to krokodil abuse.

In the U.S., codeine is a controlled substance and either requires a prescription or may be available over-the-counter from the pharmacist (as with some cough syrups) with restrictions in some states. The extent of krokodil use in the U.S. is unknown but appears to be minimal.

Addiction is an obvious problem with krokodil use due to its high opioid potency and short duration of effect. Frequent administration may lead to binge patterns that can last for days. Users are at increased risk for exhaustion due to sleep deprivation, memory loss, and problems with speech. Variations in potency or "homemade" recipes can put users at increased risk of overdose.

According the the DEA, repeated administration of desomorphine with short intervals in cancer patients with severe pain showed that desomorphine produced a high degree of addiction liability.

Another less obvious risk with krokodil use is that those who are afflicted with gangrene and other side effects may delay seeking much-needed medical treatment due to fear of legal action. In addition, the desire for continued krokodil administration to prevent withdrawal effects may prevent users from finding treatment.

Iranian surgery is an online medical tourism platform where you can find the best doctors and surgeons in Iran. The price of treatment in Iran can vary according to each individual’s case and will be determined by an in-person assessment with the doctor.

For more information about the cost of treatment in Iran and to schedule an appointment in advance, you can contact Iranian Surgery consultants via WhatsApp number 0098 901 929 0946. This service is completely free.