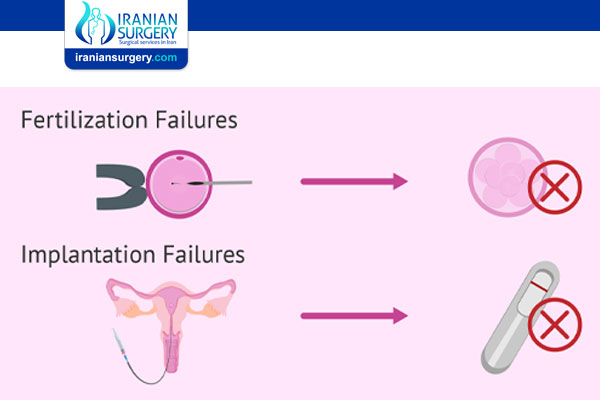 Why does IVF fail?

It is often difficult for patients to understand why, when we obtain eggs and sperm, combine them in a successful laboratory to develop embryos and put what appear to be healthy dividing embryos into the uterus, IVF could possibly not succeed.  As with most biological events, pregnancy is a very complex process.  Even today, what we do not know about pregnancy continues to exceed what we do know.

Nevertheless, there are some specific factors that we have identified that can occasionally lead to IVF failure.

The most important variables involved in a successful IVF cycle are a healthy egg, normal, functional sperm, and a uterus that is capable of nurturing the growth of a baby.  In addition to these issues, there are many other factors that can impact one’s chance for pregnancy with IVF.  These include the laboratory environment, the techniques used in the lab, and the skill of the specialists performing the egg retrieval and embryo transfer.

The human egg is a very complex structure.  As such, it is subject to damage that can render it nonfunctional.  As you may recall from high school biology, when cells divide, chromosomes (the packets of DNA that contain your genes and those of your partner) duplicate and line up in the middle of the cell.  As the cell divides, half of the chromosomes move in one direction and the other half move in the exact opposite direction, resulting in two identical cells.

These chromosomes move because they are attached to a structure called the spindle apparatus that is responsible for chromosome separation, which is necessary for cell division.  As the oocyte ages, the spindle apparatus becomes prone to breakage – such breakage can result in an abnormal distribution of chromosomes, leading to a chromosomally abnormal and therefore, nonviable embryo. The oocyte is also subject to damage due to the presence of free radicals, reactive oxygen species and other products of metabolism that occur within the ovary as a woman ages.

Many recent studies have demonstrated that between 25% and 40% of all oocytes are chromosomally abnormal.  This number obviously increases as a woman ages.

Although abnormal sperm appear to be a less common factor affecting the success of an IVF cycle, they nevertheless play an important supporting role.  Sperm do not merely bump into an egg and cause fertilization.  Rather, the process of fertilization itself is very complex.  In order for sperm to migrate to the egg, they must be motile; in other words, the tail of the sperm must be able to propel the sperm through the female reproductive tract to the egg.

There are specific receptors on the surface of a sperm head that bind to specific receptors on the outer membrane of an egg allowing for sperm/egg interaction.  Once this happens, enzymes are released from the sperm head that enable digestion of a hole in the outer membranes of the egg.  The sperm eventually penetrates the egg where the nucleus of the sperm opens, releasing the sperm DNA.  At that point, the chromosomes from the sperm and the chromosomes from the egg combine, producing a fertilized egg (which is actually a very early embryo).

Over the past few years, ICSI has evolved to the point that it is now routinely performed in cases of severe male factor, resulting in fertilization rates comparable to those achieved with normal sperm.  In addition, data from long term studies suggest that the incidence of chromosomal abnormalities in the offspring from IVF cycles in which ICSI was utilized do not exceed those found in nature.

The embryos that are ultimately transferred into the women’s uterus are selected by the embryologist.  Unfortunately, our ability to distinguish chromosomally normal from chromosomally abnormal embryos remains severely limited.  Essentially, our embryologists select embryos for transfer based on three basic criteria:  cell stage, embryo grade and the rate of cell division.  We know from studies performed in our laboratory that on day three, embryos that have developed to at least the 6 cell stage have a much better prognosis for success than embryos that have 5 or fewer cells.

Similarly, we believe that embryos that are of a better grade (grade 1, 2 or even 2.5) are much more likely to implant that those embryos with lower grades (3 or 4).  In addition, as we observe the embryos on a regular basis, our embryologists are able to determine the rate of cell division.  For example, an embryo that gradually reaches the 8 cell stage by day three is much more likely to do well than an embryo that has delayed fertilization and rapid growth towards the end of this time period.

The IVF laboratory is a very tightly controlled environment, in which we attempt to simulate what sperm, eggs and embryos experience inside the female reproductive tract.  Specifically, we tightly control oxygen concentration, carbon dioxide concentration, and other factors such as humidity, PH, temperature and light.  Even slight alterations from what embryos normally experience can lead to death of the embryos and therefore no chance for pregnancy from the resulting cycle.

Our embryologists continuously keep up with the changing literature and make alterations in our laboratory as necessary, in order to continue to optimize the environment to which gametes and embryos are exposed.  In addition, they perform daily quality assessment and control procedures in order to confirm that our equipment is always functioning optimally.  The construction of the laboratory itself, which involved the placement of multiple types of filters in the ceilings of the operating room and the laboratory, was meticulously overseen in order to guarantee an optimal laboratory environment.  In addition, such seemingly minor details as using only incandescent light during procedures can have profound effects on ultimate outcome.

The surgical procedures themselves, the egg retrieval and the embryo transfer, are very important to the success of an IVF cycle.  Retrieving fewer eggs than expected, or even worse – failing to retrieve any eggs, can lead to an adverse outcome.  In addition, during the embryo transfer procedure – one of the most important steps of the entire cycle – embryos must be placed in the correct location.

In our program, we perform a trial transfer in order to determine, in advance, the optimal location for embryo placement.  In addition, prior to transferring the embryos, your physician will take great pains to remove any cervical mucus or other cellular debris that may plug up the transfer catheter.  We also pre-treat all of our patients with a smooth muscle relaxant in order to prevent contractions of the uterus.

Despite all of the challenges noted above, in vitro fertilization remains extraordinarily successful.  A large nationwide study lead by our physicians and involving over 55,000 IVF cycles from 54 different programs, revealed that a couple’s chance of delivering a baby is the same in their first three cycles of in vitro fertilization.  In other words, even if a couple fails to conceive in their first two IVF cycles, their chance for success in the third cycle is still the same as it was in cycle one or two.  If, however a couple fails to conceive after three cycles of in vitro fertilization, their chance for a successful conception in another IVF cycle diminishes drastically.  At that point in time, they should consider other options such as seeking treatment at another facility, donor gametes or other alternatives.

Iranian surgery is an online medical tourism platform where you can find the best gynaecologists and obstetricians in Iran. The price of an Infertility treatment in Iran can vary according to each individual’s case and will be determined based on in-person assessment with the doctor.