Breast reconstruction is the rebuilding of a breast, usually in women. It involves using autologous tissue or prosthetic material to construct a natural-looking breast. Often this includes the reformation of a natural-looking areola and nipple. This procedure involves the use of implants or tissue taken from other parts of the woman's body.

Generally, the aesthetic appearance is acceptable to the woman, but the reconstructed area is commonly completely numb afterwards, which results in loss of sexual function as well as the ability to perceive pain caused by burns and other injuries.

The primary part of the procedure can often be carried out immediately following the mastectomy. As with many other surgeries, patients with significant medical comorbidities (high blood pressure, obesity, diabetes) and smokers are higher-risk candidates. Surgeons may choose to perform delayed reconstruction to decrease this risk. There is little evidence available from randomised studies to favour immediate or delayed reconstruction. The infection rate may be higher with primary reconstruction (done at the same time as mastectomy), but there are psychologic and financial benefits to having a single primary reconstruction. Patients expected to receive radiation therapy as part of their adjuvant treatment are also commonly considered for delayed autologous reconstruction due to significantly higher complication rates with tissue expander-implant techniques in those patients. Waiting for six months to a year following may decrease the risk of complications, but this risk will always be higher in patients who have received radiation therapy.

Breast reconstruction is a large undertaking that usually takes multiple operations. Sometimes these follow-up surgeries are spread out over weeks or months. If an implant is used, the individual runs the same risks and complications as those who use them for breast augmentation but has higher rates of capsular contracture (tightening or hardening of the scar tissue around the implant) and revisional surgeries.

There are many methods for breast reconstruction. The two most common are: 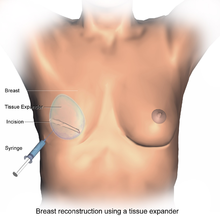 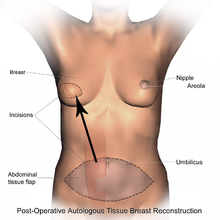 A Cochrane review published in 2016 concluded that implants for use in breast reconstructive surgery have not been adequately studied in good quality clinical trials. "These days - even after a few million women have had breasts reconstructed - surgeons cannot inform women about the risks and complications of different implant-based breast reconstructive options on the basis of results derived from Randomized Controlled Trials.

To restore the appearance of the breast with surgical reconstruction, there are a few options regarding the nipple and areola.

The typical outcome of breast reduction surgery is a breast mound with a pleasing aesthetic shape, with a texture similar to a natural breast, but which feels completely or mostly numb for the woman herself.This loss of sensation, called somatosensory loss or the inability to perceive touch, heat, cold, and pain, sometimes results in women burning themselves or injuring themselves without noticing, or not noticing that their clothing has shifted to expose their breasts. "I can't even feel it when my kids hug me," said one mother, who had nipple-sparing breast reconstruction after a bilateral mastectomy. The loss of sensation has long-term medical consequences, because it makes the affected women unable to feel itchy rashes, infected sores, cuts, bruises, or situations that risk sunburns or frostbite on the affected areas.

More than half of women treated for breast cancer develop upper quarter dysfunction, including limits on how well they can move, pain in the breast, shoulder or arm, lymphedema, loss of sensation, and impaired strength. The risk of dysfunction is higher among women who have breast reconstruction surgery. One in three have complications, one in five need further surgery and the procedure fails in 5%.

Some methods have specific side effects. The transverse rectus abdominis myocutaneous (TRAM) flap method results in weakness and loss of flexibility in the abdominal wall. Reconstruction with implants have a higher risk of long-term pain.

Outcomes-based research on quality of life improvements and psychosocial benefits associated with breast reconstruction  served as the stimulus in the United States for the 1998 Women's Health and Cancer Rights Act, which mandated that health care payer cover breast and nipple reconstruction, contralateral procedures to achieve symmetry, and treatment for the sequelae of mastectomy. This was followed in 2001 by additional legislation imposing penalties on noncompliant insurers. Similar provisions for coverage exist in most countries worldwide through national health care programs.