Dissection of the right superior pulmonary vein with VATS 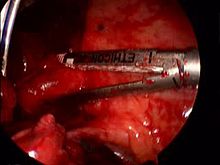 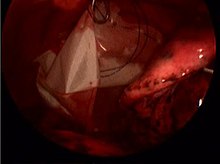 Anatomic lung resection, i.e. pulmonary lobectomy or pneumonectomy, in conjunction with removal of the lymph nodes from the mediastinum is the treatment modality that provides the greatest chance of long-term survival in patients with early stage non-small cell lung cancer. Anatomic lung resections require a dissection of the pulmonary hilum with individual ligation and division of the pulmonary artery, pulmonary vein, and the bronchus where these enter the lung. In the setting of lung cancer, the rationale for anatomic lung resection is a complete removal of a lung tumor along with the lymphatics that drain that tumor to assure that any tumor cells present in the lymphatics will also be removed; lesser resections have been shown to be associated with a higher risk of local recurrence and diminished long-term survival. A cornerstone of surgical treatment of early stage lung cancer is aggressive removal of lymph nodes from the mediastinum; this enhances the likelihood of removing all cancer cells (complete resection) and identifies patients who will require additional treatment (i.e. adjuvant chemotherapy). An important consideration when performing anatomic lung resection is to spare as much lung tissue as possible; while lobectomy and pneumonectomy are equivalent cancer operations, the risk of complications and morbidity is considerably less with lobectomy.

Traditionally, pulmonary lobectomy is performed through a poster-lateral thoracotomy incision; over decades, thoracotomy has demonstrated its effectiveness in providing access to structures in the thorax and is in general tolerated by patients. Thoracotomy, as most commonly performed, requires cutting through one or more major muscles of the chest wall including the latissimus dorsi, pectoralis or serratus muscles, and spreading of the ribs with a rib spreader. Because the joints of the ribs with the vertebral bodies have only limited flexibility, the use of a rib spreader usually results in rib fracture in the process of rendering the interspace between the ribs wide enough to perform a pulmonary lobectomy. Because of this, thoracic surgeons generally intentionally remove a section of one or more ribs in an effort to prevent splintered rib fracture associated with the use of the rib spreader. There is wide consensus that thoracotomy is one of the most painful incisions that patients can undergo. In the initial post-operative setting after thoracotomy, the use of epidural catheters, patient-controlled analgesia pumps for intravenous narcotic administration, and intravenous ketorolac are commonplace and patients generally require a 7- to 10-day hospital stay before their pain is adequately controlled with oral opioidanalgesics that they can take at home. A great deal of emphasis is placed on post-operative pulmonary toilet because the incisional pain associated with thoracotomyleads to a decreased ability of patients to cough and clear bronchial secretions, which in turn leads to an increased risk of persistent atelectasis (collapsed areas of lung) or pneumonia. Finally, to allow time for the divided muscles and bone fractures to heal, patients must refrain from strenuous activity or lifting greater than 5 lbs for 6 weeks after surgery.

Video-assisted thoracoscopic surgery, or VATS, came into widespread use in the 1990s and early on in its development practitioners began to perform lobectomy via VATS incisions. The advantage of VATS over thoracotomy is that major chest wall muscles are not divided and ribs are not spread. This leads to reductions in the intensity and duration of post-operative pain and allows patients to return to full activity more quickly.

VATS lobectomy is the same as lobectomy performed via thoracotomy in that the pulmonary artery, pulmonary vein, and bronchus to the involved pulmonary lobe are individually dissected, ligated and divided. Generally, endoscopic stapling devices are used to ligate and divide the vessels and the bronchus however conventional suture material can also be used. During VATS lobectomy, the structures being operated on are not directly visualized with the naked eye but are visualized solely with a rigid thoracoscope. A camera attached to the thoracoscope transmits the image to a video screen, which allows surgeons and assistants to observe the flow of the operation. Surgical specimens are placed into a water-tight bag and removed from the chest without morcellization (i.e. breaking up the specimen into small pieces before removal); this prevents seeding of the VATS incisions with tumor cells and allows for an intact specimen for pathology examination and cancer staging. Removal of lymph nodes from the mediastinum is not compromised by VATS and remains a cornerstone of the surgical therapy of lung cancer. Visualization is enhanced due to the magnification afforded by the fiberoptic thoracoscope and a 30-degree angle of visualization aids in looking around corners. However, because the incisions are too small to allow passage of the surgeon's hands into the thorax, the surgeon's tactile input is compromised. VATS operations rely on a thorough understanding of pulmonary anatomy to allow for strategically placed incisions (usually 3–5 incisions total). The main advantages of VATS over thoracotomy are that major muscles of the chest wall are not divided and rib spreaders that can lead to rib fractures or costovertebral joint pain are not used. This results in a hospital length of stay after VATS lobectomy generally reported to range from 3–5 days, or roughly half that for lobectomy via thoracotomy.

Not all patients are candidates for VATS lobectomy. The classic indication for a VATS approach to lobectomy is early stage lung cancer in which the primary tumor is 3 cm or less in diameter and located toward the periphery of the lung parenchyma. Tumors that are located close to the major blood vessels or airway where these enter the lung or larger tumors associated with tumor spread to lymph nodes in the central regions of the lung may require the enhanced tactile input afforded by thoracotomy to make sure the tumors are resected with a negative margin, i.e. that the tumor is surrounded completely by a margin of non-cancerous tissue, and that arteries and airways to portions of the lung that are not being removed are preserved intact. In addition, patients who have had pre-operative chemotherapy or radiation for lung cancer or previous chest surgeries may not be candidates for VATS due to scarring around the major blood vessels that makes dissection via VATS difficult. Cases in which a lung tumor invades the chest wall and an en bloc resection of ribs must be performed to achieve negative resection margins generally are felt to abrogate the value of VATS. Finally, pneumonectomy by VATS, though it has been reported, is generally not performed because the size of the specimen requires a large incision with or without rib spreading for removal, abrogating the value of VATS.

Published benefits of lobectomy performed by VATS versus thoracotomy

1How long is recovery from a lobectomy?
The removal usually occurs three to four days after your surgery but may take longer if the surgery was extensive. Again, this does not mean your recovery is going poorly if the chest tube needs to be left in place longer than the average amount of time.
2How dangerous is a lobectomy?
A lobectomy is a major surgery and it has some risks, such as: Infection. A collapsed lung, which prevents your lung from filling with air when you breathe in. Air or fluid leaking into your chest.
3Is a cough normal after a lobectomy?
Seventeen patients who had undergone a lobectomy were selected, of whom 13 had a persistent cough and 4 had no coughing. None of these patients had chronic bronchitis or a diagnosis of gastroesophageal reflux disease (GERD) before surgery, and all symptoms had become manifest after the pulmonary resection procedure.
4How long does it take to heal from lung surgery?
Your Recovery Lung resection is surgery to remove part or all of your lung. It is used to treat a damaged or diseased lung. It is common to feel tired for 6 to 8 weeks after surgery. Your chest may hurt and be swollen for up to 6 weeks.
5How long does VATS lung surgery take?
This usually gets better after 2 to 3 weeks. You will have stitches or staples in the incisions. Your doctor will take these out 1 to 2 weeks after your surgery. The amount of time you will need to recover depends on the surgery you had.
6Can I survive with 1 lung?
Living with one lung doesn't usually affect everyday tasks or life expectancy, though a person with one lung wouldn't be able to exercise as strenuously as a healthy person with two lungs, said Dr. Len Horovitz, a pulmonologist at Lenox Hill Hospital in New York City
7How long do you have to stay in the hospital after lung surgery?
5 to 7 days After the Procedure Most people stay in the hospital for 5 to 7 days after open thoracotomy. Hospital stay for a video-assisted thoracoscopic surgery is most often shorter. You may spend time in the intensive care unit (ICU) after either surgery.
8Can you live with one lung after cancer?
Living with One Lung: Emily Bennett Taylor's Life After Cancer. In 2012, at 28 years old, Emily Bennett Taylor was diagnosed with stage 4 adenocarcinoma lung cancer. This is the most common type of lung cancer that develops in people who don't smoke. In most cases of stage 4 disease, the chances of survival are slim.
9How long does lung transplant surgery take?
6 to 12 hours The operation takes 4 to 8 hours. In most cases, the lung with the worst function is removed. For double lung transplants, the cut is made below the breast and reaches to both sides of the chest. Surgery takes 6 to 12 hours.
10How can I heal my lungs naturally?
Below, we look at breathing exercises and lifestyle changes that can help remove excess mucus from the lungs and improve breathing. Steam therapy. ... Controlled coughing. ... Drain mucus from the lungs. ... Exercise. ... Green tea. ... Anti-inflammatory foods. ... Chest percussion.