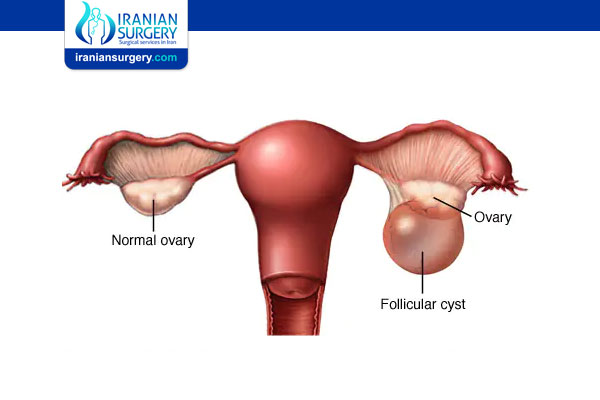 What are Ovarian Cysts?

Ovarian cysts are fluid-filled sacs or pockets in an ovary or on its surface. Women have two ovaries — each about the size and shape of an almond — on each side of the uterus. Eggs (ova), which develop and mature in the ovaries, are released in monthly cycles during the childbearing years.

Many women have ovarian cysts at some time. Most ovarian cysts present little or no discomfort and are harmless. The majority disappears without treatment within a few months.

However, ovarian cysts — especially those that have ruptured — can cause serious symptoms. To protect your health, get regular pelvic exams and know the symptoms that can signal a potentially serious problem.

Most cysts are symptomless. If symptoms are present, they are not always useful for diagnosing an ovarian cyst, because other conditions, such as endometriosis, have similar symptoms.

Symptoms of an ovarian cyst may include:

. Irregular and possibly painful menstruation: It may be heavier or lighter than before.

. Pain in the pelvis: This may be a persistent pain or an intermittent dull ache that spreads to the lower back and thighs. It may appear just before menstruation begins or ends.

. Dyspareunia: This is pelvic pain that occurs during sexual intercourse. Some women might experience pain and discomfort in the abdomen after sex.

. Bowel issues: These include pain when passing a stool, pressure on the bowels or a frequent need to pass a stool.

. Abdominal issues: There may be bloating, swelling, or heaviness in the abdomen.

. Urinary issues: The woman may have problems emptying the bladder fully or she may or feeling the need to urinate frequently.

. Hormonal abnormalities: Rarely, the body produces abnormal amounts of hormones, resulting in changes in the way the breasts and body hair grow.

Some symptoms may resemble those of pregnancy, for example, breast tenderness and nausea.

Seek immediate medical attention if you have:

. Pain with fever or vomiting

If you have these signs and symptoms or those of shock — cold, clammy skin; rapid breathing; and lightheadedness or weakness — see a doctor right away.

Read more about : Ivf In Iran

Your risk of developing an ovarian cyst is heightened by:

. Hormonal problems. These include taking the fertility drug clomiphene (Clomid), which is used to cause you to ovulate.

. Pregnancy. Sometimes, the cyst that forms when you ovulate stays on your ovary throughout your pregnancy.

. Endometriosis. This condition causes uterine endometrial cells to grow outside your uterus. Some of the tissue can attach to your ovary and form a growth.

. A severe pelvic infection. If the infection spreads to the ovaries, it can cause cysts.

. A previous ovarian cyst. If you've had one, you're likely to develop more.

Some women develop less common types of cysts that a doctor finds during a pelvic exam. Cystic ovarian masses that develop after menopause might be cancerous (malignant). That's why it's important to have regular pelvic exams.

. Ovarian torsion. Cysts that enlarge can cause the ovary to move, increasing the chance of painful twisting of your ovary (ovarian torsion). Symptoms can include an abrupt onset of severe pelvic pain, nausea and vomiting. Ovarian torsion can also decrease or stop blood flow to the ovaries.

. Rupture. A cyst that ruptures can cause severe pain and internal bleeding. The larger the cyst, the greater the risk of rupture. Vigorous activity that affects the pelvis, such as vaginal intercourse, also increases the risk.

A cyst on your ovary can be found during a pelvic exam. Depending on its size and whether it's fluid filled, solid or mixed, your doctor likely will recommend tests to determine its type and whether you need treatment. Possible tests include:

. Pregnancy test. A positive test might suggest that you have a corpus luteum cyst.

. Pelvic ultrasound. A wandlike device (transducer) sends and receives high-frequency sound waves (ultrasound) to create an image of your uterus and ovaries on a video screen. Your doctor analyzes the image to confirm the presence of a cyst, help identify its location and determine whether it's solid, filled with fluid or mixed.

. Laparoscopy. Using a laparoscope — a slim, lighted instrument inserted into your abdomen through a small incision — your doctor can see your ovaries and remove the ovarian cyst. This is a surgical procedure that requires anesthesia.

. CA 125 blood test. Blood levels of a protein called cancer antigen 125 (CA 125) often are elevated in women with ovarian cancer. If your cyst is partially solid and you're at high risk of ovarian cancer, your doctor might order this test.

Although ovarian cysts cannot be prevented, regular pelvic exams can help diagnose any changes in the ovaries. If a woman is premenopausal and has recurrent functional ovarian cysts, birth control pills or other hormone therapy may help prevent new cysts from forming. Most ovarian cysts resolve on their own without treatment and are not dangerous.

Complications are when more serious, unexpected problems occur during or after your procedure.

Possible complications of any type of surgery include bleeding or a blood clot, usually in a vein in your leg (deep vein thrombosis – DVT). You could also develop an infection.

Ovarian cyst removal can cause damage to other organs, such as your bowel, ureters or bladder, but this is unusual.

Your gynaecologist will try to preserve your ovaries so you can still have children, but this may not always be possible. Before your procedure, your gynaecologist should discuss with you the chance of losing an ovary during the operation.

You should contact the hospital where you had your surgery if you develop any of the following symptoms:

. A high temperature, especially if you’ve also lost your appetite or are sick

. Red or painful skin around your scars

. Burning or stinging when you pass urine more often, or not being able to pass it at all.

. Pain, swelling, redness or a feeling of heat on your legs.

What are the different types of ovarian cysts?

There are two main types of ovarian cysts:

. Functional ovarian cysts – the most common type. These harmless cysts form part of the female’s normal menstrual cycle and are short-lived.

. Pathological cysts – these are cysts that grow in the ovaries; they may be harmless or cancerous (malignant).

There are two types of functional ovarian cysts:

Follicular cysts are the most common type. A woman has two ovaries. The egg moves from an ovary into the womb, where it can be fertilized by sperm. The egg is formed in the follicle, which contains fluid to protect the growing egg. When the egg is released, the follicle bursts.

In some cases, the follicle either does not shed its fluid or shrink after releasing the egg or it does not release an egg. The follicle swells with fluid, becoming a follicular ovarian cyst.

One cyst normally appears at any single time, and it normally goes away within a few weeks.

These are less common. After the egg has been released, it leaves tissue behind, known as the corpus luteum. Luteal cysts can develop when the corpus luteum fills with blood. This type of cyst normally goes away within a few months. However, it may sometimes split, or rupture, causing sudden pain and internal bleeding.

There are two types of pathological cysts:

A dermoid cyst is usually benign. They are formed from the cells that make eggs. These cysts need to be removed surgically. Dermoid cysts are the most common type of pathological cyst for women under 30 years of age.

Cystadenomas are ovarian cysts that develop from cells that cover the outer part of the ovary. Some are filled with a thick, mucus-like substance, while others contain a watery liquid.

Rather than growing inside the ovary, cystadenomas are usually attached to the ovary by a stalk. By existing outside the ovary, they can grow quite large. They are rarely cancerous, but they need to be removed surgically.

Cystadenomas are more common among women aged over 40 years.

Treatment depends on your age, the type and size of your cyst, and your symptoms. Your doctor might suggest:

. Watchful waiting. In many cases you can wait and be re-examined to see if the cyst goes away within a few months. This is typically an option — regardless of your age — if you have no symptoms and an ultrasound shows you have a simple, small, fluid-filled cyst.

Your doctor will likely recommend that you get follow-up pelvic ultrasounds at intervals to see if your cyst changes in size.

. Surgery. Your doctor might suggest removing a cyst that is large, doesn't look like a functional cyst, is growing, continues through two or three menstrual cycles, or causes pain.

Some cysts can be removed without removing the ovary (ovarian cystectomy). In some cases, your doctor might suggest removing the affected ovary and leaving the other intact (oophorectomy).

If a cystic mass is cancerous, your doctor will likely refer you to a gynecologic cancer specialist. You might need to have your uterus, ovaries and fallopian tubes removed (total hysterectomy) and possibly chemotherapy or radiation. Your doctor is also likely to recommend surgery when an ovarian cyst develops after menopause.

If left untreated, some cysts can decrease fertility. This is common with endometriomas and polycystic ovary syndrome. To improve fertility, your doctor can remove or shrink the cyst. Functional cysts, cystadenomas, and dermoid cysts do not affect fertility.

Although some doctors take a “wait and see” approach with ovarian cysts, your doctor may recommend surgery to remove and examine any cyst or growth that develops on the ovaries after menopause. This is because the risk of developing a cancerous cyst or ovarian cancer increases after menopause. However, ovarian cysts don’t increase the risk of ovarian cancer. Some doctors will remove a cyst if it’s larger than 5 centimeters in diameter.

After surgery, your nurse will make sure you’re not in pain and let you rest for a few hours. They’ll offer you something to eat and drink. You’ll usually be able to go later that day when you feel ready. Someone should drive you home and a friend or relative should stay with you overnight.

Having a general anesthetic affects everyone differently. You may find that you’re not so coordinated or that it’s difficult to think clearly. This should pass within 24 hours. In the meantime, don’t drive, drink alcohol, operate machinery or sign anything important. Always follow any advice you’re given by your gynaecologist or the hospital.

If your gynaecologist used dissolvable stitches, these will disappear on their own. Other stitches may need to be removed by the practice nurse at your GP surgery. This will usually be around five to seven days after your operation.

It takes time for your body to heal after surgery. Everyone is different. You may feel tired, and need to take a daytime nap for a few days after you get home.

But it’s also important for your recovery that you get up and about. Try taking a couple of short walks (10–15 minutes) in the first few days then building up gradually. By a week after surgery, most women can walk slowly and steadily for up to 60 minutes. After about two weeks, they are back to their normal levels of exercise. You should avoid heavy lifting for four weeks.

You’ll probably be able to go back to work a week after the procedure, but this may depend on the type of work you do. It may take a week or so more. The time it takes to recover will also be affected by whether you had keyhole or open surgery. Recovery from open surgery takes longer. If you have any questions about your recovery or when you can get back to particular activities, ask your gynecologist. It's important to follow their advice.

If you need pain relief, you can take over-the-counter painkillers such as paracetamol or ibuprofen. Always read the patient information that comes with your medicine and if you have any questions, ask your pharmacist.