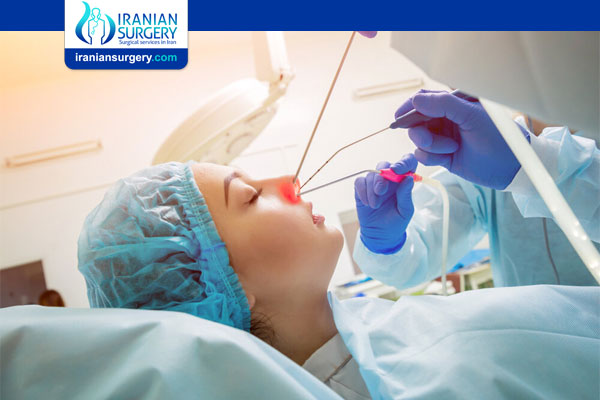 Nasal polyps are soft, painless, noncancerous growths on the lining of your nasal passages or sinuses. They hang down like teardrops or grapes. They result from chronic inflammation and are associated with asthma, recurring infection, allergies, drug sensitivity or certain immune disorders.

Small nasal polyps may not cause symptoms. Larger growths or groups of nasal polyps can block your nasal passages or lead to breathing problems, a lost sense of smell and frequent infections.

Nasal polyps can affect anyone, but they're more common in adults. Medications can often shrink or eliminate nasal polyps, but surgery is sometimes needed to remove them. Even after successful treatment, nasal polyps often return.

Iranian surgery is an online medical tourism platform where you can find the best otolaryngologists in Iran. The price of Nasal Polyps Surgery in Iran can vary according to each individual’s case and will be determined by an in-person assessment with the doctor.

For more information about the cost of Nasal Polyps Surgery in Iran and to schedule an appointment in advance, you can contact Iranian Surgery consultants via WhatsApp number 0098 901 929 0946. This service is completely free.

Nasal polyps are associated with irritation and swelling (inflammation) of the lining of your nasal passages and sinuses that lasts more than 12 weeks (chronic sinusitis).

However, it's possible to have chronic sinusitis without nasal polyps.

Nasal polyps themselves are soft and lack sensation, so if they're small, you may not be aware you have them. Multiple growths or a large polyp may block your nasal passages and sinuses.

Common signs and symptoms of chronic sinusitis with nasal polyps include:

. Decreased or absent sense of smell

. Loss of sense of taste

. Pain in your upper teeth

. A sense of pressure over your forehead and face

See your doctor if your symptoms last more than 10 days. Symptoms of chronic sinusitis and nasal polyps are similar to those of many other conditions, including the common cold.

Seek immediate medical care or call 911 or your local emergency number if you experience:

. Sudden worsening of your symptoms

. Severe swelling around your eyes

Scientists don't yet fully understand what causes nasal polyps, why some people develop long-term inflammation, or why irritation and swelling (inflammation) triggers polyps to form in some people and not in others. The swelling occurs in the fluid-producing lining (mucous membrane) of your nose and sinuses.

There's some evidence that people who develop polyps have different immune system responses and different chemical markers in their mucous membranes than do those who don't develop polyps.

Nasal polyps can form at any age, but they're most common in young and middle-aged adults.

Nasal polyps may form anywhere in your sinuses or nasal passages, but they appear most often in an area where sinuses near your eyes, nose and cheekbones all drain through winding passages into your nose.

Any condition that triggers long-term irritation and swelling (inflammation) in your nasal passages or sinuses, such as infections or allergies, may increase your risk of developing nasal polyps.

. Asthma, a disease that causes the airway to swell (inflame) and narrow

. Cystic fibrosis, a genetic disorder that results in abnormally thick, sticky fluids in the body, including thick mucus from nasal and sinus linings

. Churg-Strauss syndrome (eosinophilic granulomatosis with polyangiitis), a rare disease that causes the inflammation of blood vessels

. Vitamin D deficiency, which occurs when your body doesn't have enough vitamin D

Surgery is usually considered only when other treatments don’t alleviate these symptoms. Surgery to remove nasal polyps is known as nasal polypectomy. This may not be appropriate if you smoke or have a history of bleeding concerns or conditions like severe pulmonary or cardiac problems. A healthcare professional can recommend whether polypectomy is right for you. And while your symptoms may dramatically improve, polyps often grow back gradually.

Nasal polyp surgery removes polyps from the lining of your nasal and sinus passageways. The procedure you’ll require depends on where the polyps are located.

For larger polyps located in the front of your nose, a doctor may be able to remove them in the office using an instrument called a microdebrider. It debrides (removes tissue) and suctions loosened material at the same time.

Alternately, your doctor might remove the polyps using small graspers. This process is called an intranasal polypectomy.

For polyps that are very small in size, more extensive, located deeper in your nasal cavity, or complicated in other ways, you may require a nasal polypectomy in an operating room with anesthesia.

How Long Does It Take

Nasal polyp surgery itself usually lasts a few hours. If you’re undergoing general anesthesia, you may spend the day in surgery preparation and postsurgery recovery.

In most cases, you should be able to go home the same day as your surgery. Some people may need to stay at the hospital overnight.

Make sure you’ve arranged for a ride home and for someone to stay with you overnight to help monitor your condition.

Nasal polyp surgery is conducted at a hospital or an outpatient facility. You may be prepped by a nurse or an anesthesiologist before undergoing your operation.

A surgeon performs nasal polypectomy entirely through your nose. Unlike other types of surgery, no incisions are made to access the polyps. You’ll need local or possibly general anesthesia, depending on the extent of the extractions from your nasal cavities.

With an endoscopic nasal polypectomy, the surgeon inserts a thin tube with a small camera into your nasal cavity. This helps them see the polyps more clearly, especially when the growths are located deep in your cavities.

Once your surgeon locates the polyps, they’ll remove them with a microdebrider or surgical graspers.

Nasal polyps can cause complications because they block normal airflow and fluid drainage, and also because of the long-term irritation and swelling (inflammation) underlying their development.

. Obstructive sleep apnea. This is a potentially serious condition in which you stop and start breathing frequently during sleep.

The complication rate from nasal polyp surgery is lower than for general sinus surgery. You may notice slight bleeding from your nose for the few weeks.

Your surgeon might arrange a follow-up visit about a week after the surgery to check how your nasal passages are healing and remove any crusts. They may also place steroid-eluting stents in your nasal cavity.

These stents are placed to stop inflammation and slow or prevent the growth of new polyps. A healthcare professional will remove them in follow-up visits.

You’ll likely start feeling better within a few days. You may want to take up to 1 week off from work to recover, if possible.

After nasal polyp surgery, the doctor will likely recommend using a saline spray several times a day. They may also prescribe:

. injury to the skull base

. severe side effects from general anesthesia