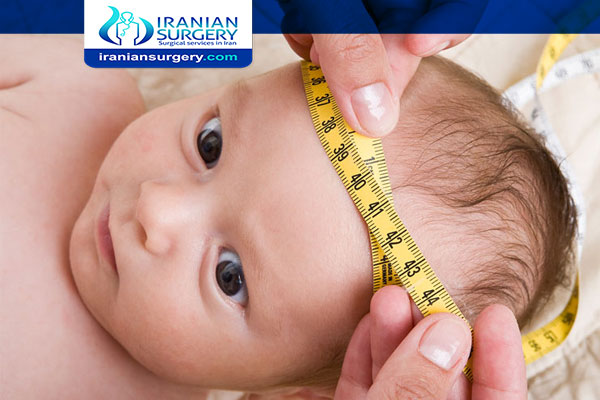 Hydrocephalus is a condition in which an accumulation of cerebrospinal fluid (CSF) occurs within the brain. This typically causes increased pressure inside the skull. Older people may have headaches, double vision, poor balance, urinary incontinence, personality changes, or mental impairment. In babies, it may be seen as a rapid increase in head size. Other symptoms may include vomiting, sleepiness, seizures, and downward pointing of the eyes.

Hydrocephalus can occur due to birth defects or be acquired later in life. Associated birth defects include neural tube defects and those that result in aqueductal stenosis. Other causes include meningitis, brain tumors, traumatic brain injury, intraventricular hemorrhage, and subarachnoid hemorrhage. The four types of hydrocephalus are communicating, noncommunicating, ex vacuo, and normal pressure. Diagnosis is typically made by examination and medical imaging.

Hydrocephalus is typically treated by the surgical placement of a shunt system. A procedure called a third ventriculostomy may be an option in a few people. Complications from shunts may include overdrainage, underdrainage, mechanical failure, infection, or obstruction. This may require replacement. Outcomes are variable, but many people with shunts live normal lives. Without treatment, death may occur.

About one to two per 1,000 newborns have hydrocephalus. Rates in the developing world may be more. Normal pressure hydrocephalus is estimated to affect about 5 per 100,000 people with rates increasing with age. Description of hydrocephalus by Hippocrates date back more than 2000 years. The word “hydrocephalus” is from the Greek ὕδωρ (hydōr) meaning “water” and κεφαλή (kephalē) meaning “head”.

Read more about : What size of ovarian cyst is considered large? 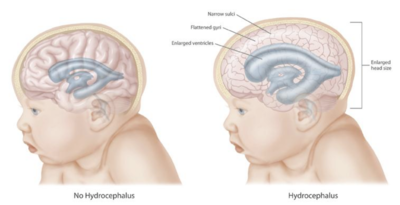 Illustration showing different effects of hydrocephalus on the brain and cranium

The clinical presentation of hydrocephalus varies with chronicity. Acute dilatation of the ventricular system is more likely to manifest with the nonspecific signs and symptoms of increased intracranial pressure. By contrast, chronic dilatation (especially in the elderly population) may have a more insidious onset presenting, for instance, with Hakim’s triad (Adams triad).

Hakim’s triad of gait instability, urinary incontinence, and dementia is a relatively typical manifestation of the distinct entity normal-pressure hydrocephalus. Focal neurological deficits may also occur, such as abducens nerve palsy and vertical gaze palsy (Parinaud syndrome due to compression of the quadrigeminal plate, where the neural centers coordinating the conjugated vertical eye movement are located). The symptoms depend on the cause of the blockage, the person’s age, and how much brain tissue has been damaged by the swelling.

In infants with hydrocephalus, CSF builds up in the central nervous system, causing the fontanelle (soft spot) to bulge and the head to be larger than expected. Early symptoms may also include:

Symptoms that may occur in older children can include:

Because hydrocephalus can injure the brain, thought and behavior may be adversely affected. Learning disabilities including short-term memory loss are common among those with hydrocephalus, who tend to score better on verbal IQ than on performance IQ, which is thought to reflect the distribution of nerve damage to the brain. However, the severity of hydrocephalus can differ considerably between individuals, and some are of average or above-average intelligence. Someone with hydrocephalus may have coordination and visual problems, problems with coordination, or clumsiness. They may reach puberty earlier than the average child (see precocious puberty). About one in four develops epilepsy. 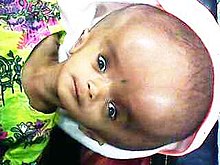 Other causes of congenital hydrocephalus include neural-tube defects, arachnoid cysts, Dandy-Walker syndrome, and Arnold-Chiari malformation. The cranial bonesfuse by the end of the third year of life. For head enlargement to occur, hydrocephalus must occur before then. The causes are usually genetic, but can also be acquired and usually occur within the first few months of life, which include intraventricular matrix hemorrhages in premature infants, infections, type II Arnold-Chiari malformation, aqueduct atresia and stenosis, and Dandy-Walker malformation.

In newborns and toddlers with hydrocephalus, the head circumference is enlarged rapidly and soon surpasses the 97th percentile. Since the skull bones have not yet firmly joined together, bulging, firm anterior and posterior fontanelles may be present even when the person is in an upright position.

The infant exhibits fretfulness, poor feeding, and frequent vomiting. As the hydrocephalus progresses, torpor sets in, and infants show lack of interest in their surroundings. Later on, their upper eyelids become retracted and their eyes are turned downwards (“sunset eyes”) (due to hydrocephalic pressure on the mesencephalic tegmentum and paralysis of upward gaze). Movements become weak and the arms may become tremulous. Papilledema is absent, but vision may be reduced. The head becomes so enlarged that they eventually may be bedridden.

About 80–90% of fetuses or newborn infants with spina bifida—often associated with meningocele or myelomeningocele—develop hydrocephalus.

This condition is acquired as a consequence of CNS infections, meningitis, brain tumors, head trauma, toxoplasmosis, or intracranial hemorrhage (subarachnoid or intraparenchymal), and is usually painful.