A hospital is a health care institution providing patient treatment with specialized medical and nursing staff and medical equipment. The best-known type of hospital is the general hospital, which typically has an emergency department to treat urgent health problems ranging from fire and accident victims to a sudden illness. A district hospital typically is the major health care facility in its region, with a large number of beds for intensive care and additional beds for patients who need long-term care. Specialized hospitals include trauma centers, rehabilitation hospitals, children’s hospitals, seniors’ (geriatric) hospitals, and hospitals for dealing with specific medical needs such as psychiatric treatment (see psychiatric hospital) and certain disease categories. Specialized hospitals can help reduce health care costs compared to general hospitals. Hospitals are classified as general, specialty, or government depending on the sources of income received.

A teaching hospital combines assistance to people with teaching to medical students and nurses. The medical facility smaller than a hospital is generally called a clinic. Hospitals have a range of departments (e.g. surgery and urgent care) and specialist units such as cardiology. Some hospitals have outpatient departmentsand some have chronic treatment units. Common support units include a pharmacy, pathology, and radiology.

Hospitals are usually funded by the public sector, health organisations (for profit or nonprofit), health insurance companies, or charities, including direct charitable donations. Historically, hospitals were often founded and funded by religious orders, or by charitable individuals and leaders.

Currently, hospitals are largely staffed by professional physicians, surgeons, nurses, and allied health practitioners, whereas in the past, this work was usually performed by the members of founding religious orders or by volunteers. However, there are various Catholic religious orders, such as the Alexians and the Bon Secours Sisters that still focus on hospital ministry in the late 1990s, as well as several other Christian denominations, including the Methodists and Lutherans, which run hospitals. In accordance with the original meaning of the word, hospitals were originally “places of hospitality”, and this meaning is still preserved in the names of some institutions such as the Royal Hospital Chelsea, established in 1681 as a retirement and nursing home for veteran soldiers. 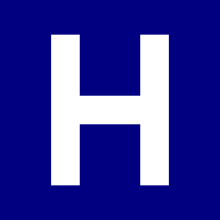 During peacetime, hospitals can be indicated by a variety of symbols. For example, a white ‘H’ on a blue background is often used in the United States. During times of armed conflict, a hospital may be marked with the emblem of the red cross, red crescent or red crystal in accordance with the Geneva Conventions.

During the Middle Ages, hospitals served different functions from modern institutions. Middle Ages hospitals were almshouses for the poor, hostels for pilgrims, or hospital schools. The word “hospital” comes from the Latin hospes, signifying a stranger or foreigner, hence a guest. Another noun derived from this, hospitiumcame to signify hospitality, that is the relation between guest and shelterer, hospitality, friendliness, and hospitable reception. By metonymy the Latin word then came to mean a guest-chamber, guest’s lodging, an inn. Hospes is thus the root for the English words host (where the p was dropped for convenience of pronunciation) hospitality, hospice, hostel and hotel. The latter modern word derives from Latin via the ancient French romance word hostel, which developed a silent s, which letter was eventually removed from the word, the loss of which is signified by a circumflex in the modern French word hôtel. The German word ‘Spital’ shares similar roots.

The grammar of the word differs slightly depending on the dialect. In the United States, hospital usually requires an article; in the United Kingdom and elsewhere, the word normally is used without an article when it is the object of a preposition and when referring to a patient (“in/to the hospital” vs. “in/to hospital”); in Canada, both uses are found.

Acute care
Hospital that treats patients in the acute phase of an illness or injury.

Addiction/substance abuse treatment
Hospital that exists solely to provide assessment and treatment of individuals with addictions.

Rural Hospital
Hospital that is located outside the U.S. Census-designated Metropolitan Statistical Area.

Urban Hospital
Hospital that is located within the U.S. Census-designated Metropolitan Statistical Area.

Long-Term Care Hospital
Hospital that provides medical and skilled nursing services to patients with long-term illnesses who are not in an acute phase but require a level of service not available in a nursing home.

Psychiatric Hospital
Hospital that provides diagnostic and treatment services to patients with mental and/or emotional disorders.

Teaching Hospital
Hospital that has an accredited medical residency-training program and usually has affiliation with a medical school.

Hospitals may be compared and classified in various ways: by ownership and control, by type of service rendered, by length of stay, by size, or by facilities and administration provided. Examples include the general hospital, the specialized hospital, the short-stay hospital, and the long-term-care facility.

One of the most basic ways to categorize hospitals is by size:

Bed number and length of stay in hospital

Hospitals may be compared by the number of beds they contain. Modern hospitals tend to rarely exceed 800 beds, and though some integrated health facilities may have more beds, they often comprise multiple geographic locations, each with several hundred beds. In the early 21st century, it was thought that a facility of 800 beds was the largest unit that could be governed satisfactorily from a single administrative unit while maintaining a corporate unity.

Another index is the average bed-occupancy rate—that is, the percentage of available beds actually occupied per day or per month. Bed-occupancy rates may be higher in the cold winter months, which bring more respiratory disease. In developing countries the bed-occupancy rate is often more than 100 percent—there are more patients in the hospital than there are beds for them. This situation has also emerged in some developed countries where demand for services has outstripped supply.

The amount of time that a patient spends in a hospital bed, or the average length of stay (ALOS), is another important index and depends on the nature of the hospital. In an acute-care hospital the ALOS will be relatively short. In hospitals catering to the chronically ill, the ALOS will, for the most part, be higher. There may be significant variations between units in the same hospital, depending on the acuity and comorbidities of the patients (comorbidity is the presence of two or more unrelated diseases or disease processes in a single patient). In hospitals in developing countries, the ALOS is much shorter than in developed countries.

The best-known type of hospital is the general hospital, also known as an acute-care hospital. These facilities handle many kinds of disease and injury, and normally have an emergency department (sometimes known as “accident & emergency”) or trauma center to deal with immediate and urgent threats to health. Larger cities may have several hospitals of varying sizes and facilities. Some hospitals, especially in the United States and Canada, have their own ambulance service.

A district hospital typically is the major health care facility in its region, with large numbers of beds for intensive care, critical care, and long-term care.

General hospitals may be academic health facilities or community-based entities. They are general in the sense that they admit all types of medical and surgical cases, and they concentrate on patients with acute illnesses needing relatively short-term care. Community general hospitals vary in their bed numbers. Each general hospital, however, has an organized medical staff, a professional staff of other health providers (such as nurses, technicians, dietitians, and physiotherapists), and basic diagnostic equipment. In addition to the essential services relating to patient care, and depending on size and location, a community general hospital may also have a pharmacy, a laboratory, sophisticated diagnostic services (such as radiology and angiography), physical therapy departments, an obstetrical unit (a nursery and a delivery room), operating rooms, recovery rooms, an outpatient department, and an emergency department. Smaller hospitals may diagnose and stabilize patients prior to transfer to facilities with specialty services.

In larger hospitals there may be additional facilities: dental services, a nursery for premature infants, an organ bank for use in transplantation, a department of renal dialysis (removal of wastes from the blood by passing it through semipermeable membranes, as in the artificial kidney), equipment for inhalation therapy, an intensive care unit, a volunteer-services department, and, possibly, a home-care program or access to home-care placement services.

The complexity of the general hospital is in large part a reflection of advances in diagnostic and treatment technologies. Such advances range from the 20th-century introduction of antibiotics and laboratory procedures to the continued emergence of new surgical techniques, new materials and equipment for complex therapies (e.g., nuclear medicine and radiation therapy), and new approaches to and equipment for physical therapy and rehabilitation.

The legally constituted governing body of the hospital, with full responsibility for the conduct and efficient management of the hospital, is usually a hospital board. The board establishes policy and, on the advice of a medical advisory board, appoints a medical staff and an administrator. It exercises control over expenditures and has the responsibility for maintaining professional standards.

The administrator is the chief executive officer of the hospital and is responsible to the board. In a large hospital there are many separate departments, each of which is controlled by a department head. The largest department in any hospital is nursing, followed by the dietary department and housekeeping. Examples of other departments that are important to the functioning of the hospital include laundry, engineering, stores, purchasing, accounting, pharmacy, physical and occupational therapy, social service, pathology, X-ray, and medical records.

The medical staff is also organized into departments, such as surgery, medicine, obstetrics, and pediatrics. The degree of departmentalization of the medical staff depends on the specialization of its members and not primarily on the size of the hospital, although there is usually some correlation between the two. The chiefs of the medical-staff departments, along with the chiefs of radiology and pathology, make up the medical advisory board, which usually holds regular meetings on medical-administrative matters. The professional work of the individual staff members is reviewed by medical-staff committees. In a large hospital the committees may report to the medical advisory board; in a smaller hospital, to the medical staff directly, at regular staff meetings.

General hospitals often also have a formal or an informal role as teaching institutions. When formally designed as such, teaching hospitals are affiliated with undergraduate and postgraduate education of health professionals at a university, and they provide up-to-date and often specialized therapeutic measures and facilities unavailable elsewhere in the region. As teaching hospitals have become more specialized, general hospitals have become more involved in providing general clinical training to students in a variety of health professions.

Hospitals in Iran have long been a safe and affordable health-care alternatives for scores of tourist who cannot afford medical care in the their country. Be it dental treatments, plastic surgery, weight loss procedures, general surgery or any other medical procedure, the iranian is one of the most popular places in terms of catering to medical tourists.