A conjunctival flap provides a safeguard against exogenous infection and is almost universally used in the cataract surgery of today.In rupture of the wound after extraction of the lens, the use of an apron flap of conjunctiva combined with enlargement of the wound is suggested.A lateralized conjunctival bridge is suggested by Elliott when a cataract operation is necessary in an eye with a filtering bleb.An apron flap combined with scarification of a crescent of cornea is useful to correct excessive hypotony.A sliding flap may be sutured to the conjunctiva and episclera. To insure adhesion and prevent premature cutting out of the sutures, the ends of the flap may be buried under a small tunnel of conjunctiva.The corneal implant in keratoplasty is most frequently stabilized by some type of conjunctival flap.A bridge flap has been found useful in progressive ulceration of the cornea.Rodent ulcer may be covered with a flap which must be larger than the size of the lesion.A shrunken blind eye with intact cornea may sometimes be used as the basis for an artificial eye by covering the denuded cornea with a complete conjunctival flap.Complete coverage of the cornea has been found to prevent ulceration in acute gonococcal ophthalmia.How much conjunctival flap surgery cost  in Iran?conjunctival flap surgery cost  in Iran start from $590

What is conjunctival flap eye surgery?

The Gundersen conjunctival flap procedure involves the transposition of a thin flap of conjunctiva to cover the cornea for the relief of painful ocular surface disorders or to provide metabolic support for corneal healing.A Gundersen flap, also known as Gundersen\'s flap, Gundersen\'s conjunctival flap, or conjunctivoplasty, and often misspelled Gunderson, is a surgical procedure for correcting corneal disease. It involves excising a damaged section of cornea, and replacing it with a section (or \"flap\") of the patient\'s own conjunctiva

Total Conjunctival FlapThe most commonly employed technique for a total conjunctival flap is described by Gundersen58 or modifications thereof. 60,70 % Anesthesia may be local or general, but retrobulbar anesthesia is adequate in mos casest. Before the procedure, it is important to evaluate the availability and mobility of the conjunctiva. Conjunctival scarring in the area to be mobilized may preclude the success of this procedure.After placement of the lid speculum, a 7-0 silk traction suture is placed through the peripheral cornea at the superior limbus (Fig. 36.5A). This allows the surgeon to control the globe and rotate it downward to expose the entire upper bulbar conjunctiva. Removal of the corneal epithelium can be performed after mobilization of the conjunctival flap. However, if done first, it is completed in a bloodless field and ensures it is not forgotten. 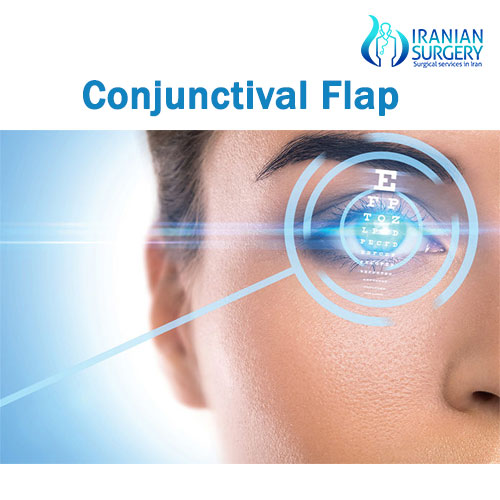 1Why are conjunctival flaps no longer a recommended treatment?
A total conjunctival flap covering the ocular surface. The most common indication for the use of a conjunctival flap is in the management of a persistent sterile corneal ulcer. ... In cases where medical treatment has been exhausted, a conjunctival flap may offer a more effective means to resolve the infection.
2What is pterygium removal with conjunctival graft?
Pterygium excision combined with a tissue graft has a lower risk of recurrence. In conjunctival autograft surgery, conjunctival tissue from another part of the person's eye along with limbal tissue is resected in one piece and used to cover the area from which the pterygium was excised.
3Can Pinguecula be removed?
Because a pinguecula will not grow across your cornea in the same way that a pterygium can, surgery is seldom used to remove a pinguecula. However, if the pinguecula becomes a pterygium, or grows very large and does not respond to eye drops, a simple surgical procedure can be used to remove it.
4Can you get rid of pterygium naturally?
Besides being unsightly, pterygium and pinguecula often become inflamed and cause dry eye. ... "Until now, the only known treatment for pterygium has been surgical removal, which involves a high recurrence rate. In addition, patients are often given topical steroids to treat their symptoms, but this can result in glaucoma.
5Do corneal ulcers go away on their own?
The prognosis for a corneal ulcer depends on its cause, its size and location, and how rapidly it is treated together with the response to treatment. ... If the ulcer is deep, dense, and central, scarring will cause some permanent changes in vision
6Can dehydration cause yellow eyes?
People who are dehydrated may also appear as if their skin is a yellow tone, and their eyes may appear as if they are sunken in or dark. ... Stress-related issues can also cause dehydration
7Can drugs cause yellow eyes?
Yellowed eyes: Intoxicating substances like alcohol, opioids, steroids, and stimulants can damage the liver, leading to cirrhosis, which can cause jaundice (yellowing of the skin and the whites of the eyes).
8Do yellow eyes go away?
In adults, jaundice itself usually isn't treated. But your doctor will treat the condition that's causing it. If you have acute viral hepatitis, jaundice will go away on its own as the liver begins to heal. If a blocked bile duct is to blame, your doctor may suggest surgery to open it.
9Can tiredness cause yellow eyes?
Most people with Gilbert's syndrome experience occasional and short-lived episodes of jaundice (yellowing of the skin and whites of the eyes) due to the build-up of bilirubin in the blood. ... Some people also report other problems during episodes of jaundice, including: abdominal (tummy) pain. feeling very tired (fatigue)
10Why are my eyes a little bit yellow?
One common sign of a health problem is yellow eyes. Often this yellowing is referred to as jaundice. There are many possible causes for yellow eyes. Most are related to problems with the gallbladder, liver, or pancreas, which cause excess amounts of a substance called bilirubin to collect in the blood.