Can Sperm with DNA Fragmentation Fertilize an Egg? 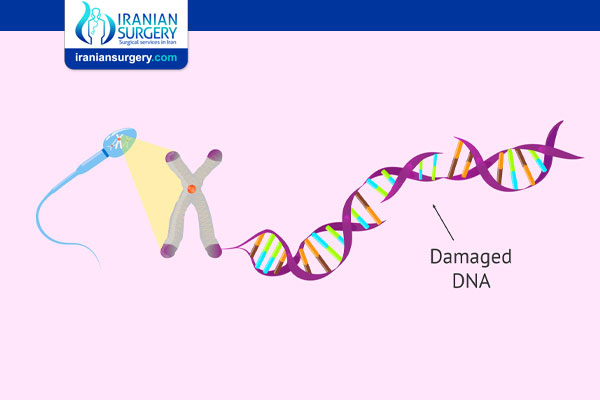 Can Sperm with DNA Fragmentation Fertilize an Egg?

Sperm DNA fragmentation refers to a change or deletion of bases, or a break or separation in one or both strands of DNA contained within sperm. This damage can occur at several different points in the sperm’s life cycle: while it’s being produced within the testicles by a series of cell divisions called spermatogenesis, while it’s in “storage” in the epididymis prior to ejaculation, or even possibly post-ejaculation.

Why Is the Genetic Health of Sperm Important?

The driving purpose of sperm is a single task: to carry genetic material (DNA) from one biological parent and combine with the genetic material contained within the egg of the other, creating a unique genetic code for the offspring.

Think about the structure of sperm. The majority of real estate is dedicated to its head, where chromosomes — molecules of DNA — are coiled tightly within a nucleus. The function of the neck and tail are to allow the sperm to transport its precious “cargo” most efficiently.

Since DNA carries all of the instructions for the development of an embryo, it makes sense that the genetic integrity of sperm is a key consideration in fertility. Any damage to the DNA within sperm may interfere with the sperm’s ability to properly fertilize an egg or develop into a healthy, thriving embryo. That’s exactly the issue with sperm DNA fragmentation.

Is It Possible for Sperm with DNA Fragmentation to Fertilize an Egg?

Sperm provide half of the genetic material to the embryo. The father’s (paternal) DNA is susceptible to damage due to inflammation, chemotherapy, environmental exposures, laboratory processing, and other conditions. Sperm with damaged (broken) DNA are still able to fertilize an egg. The embryo can develop for up to about 5 days, dividing and even forming a blastocyst (the stage that implants into the uterus) before the paternal DNA becomes necessary for further development.

Eggs are very competent at repairing damaged DNA (from the sperm or egg), but the amount and type of damage can be too much for these repair mechanisms. Single-strand breaks in DNA are most easily repaired, since the unbroken strand is a template. But double-strand breaks need to be repaired at exactly the right spot in the DNA. Double-double-strand breaks are the worst, since these are small pieces of double-stranded DNA that could be re-inserted in the wrong place, in the wrong orientation, or not at all. This can lead to early embryonic death or serious genetic problems.

Iranian surgery is an online medical tourism platform where you can find the best doctors and fertility specialists in Iran. The price of Infertility Treatment in Iran can vary according to each individual’s case and will be determined by an in-person assessment with the doctor.

For more information about the cost of Infertility Treatment in Iran and to schedule an appointment in advance, you can contact Iranian Surgery consultants via WhatsApp number 0098 901 929 0946. This service is completely free.