Conservative treatment regimens vary greatly but commonly involve immobilisation with rigid casting or functional bracing. The foot is initially placed in full equinus (30° namely full plantarflexion). The foot is then brought into neutral sequentially over a period of 8-12 wk. 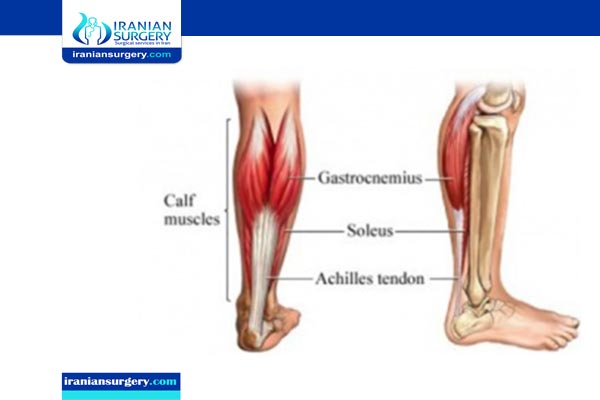 We prospectively analyzed the functional and clinical results of patients who underwent a single end-to-end suture and an augmented tendon repair with plantaris tendon at middle-term follow-up. From January 2003 to May 2005, 30 consecutive patients were operated on for the treatment of acute Achilles' tendon rupture by means of 2 different methods. No cases required adjunctive procedures to allow for acceptable end-to-end apposition.

Patients in the study groups were followed up at a mean of 17.8 months after surgery. At the end of the follow-up, functional and subjective outcome scores were evaluated. The American Orthopaedic Foot and Ankle Society hindfoot clinical outcome scores were 96.7 in group 1 and 98.8 in group 2. Although there was a numerical increase in group 2, no significant difference was determined between the 2 study groups statistically. The surgical outcome concerning local tenderness, skin adhesion scar, and tendon thickness was better in group 2 than in group 1 without a statistical significance.

Although functional outcomes of both treatment groups were the same, the end-to-end suturing technique provided a safer and more reliable treatment with a low risk of complications in the treatment of acute Achilles' tendon ruptures compared with the plantaris tendon augmentation technique. 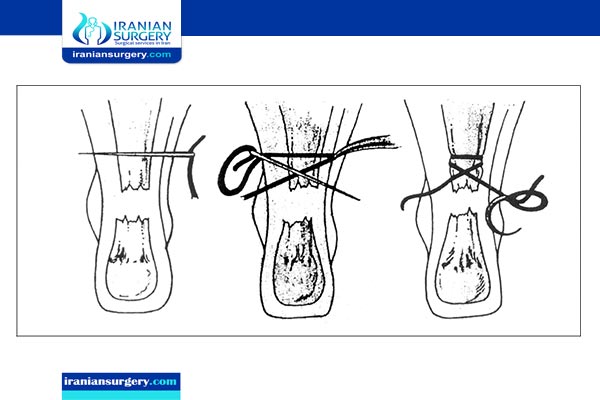 Klein recommends the use of absorbable sutures to reduce the symptoms should nerve injury occur. The Ma & Griffith repair consists of a Bunnel suture applied to the proximal tendon and a box suture distally in the stump inserted through 6 para-tendinous stab incisions. 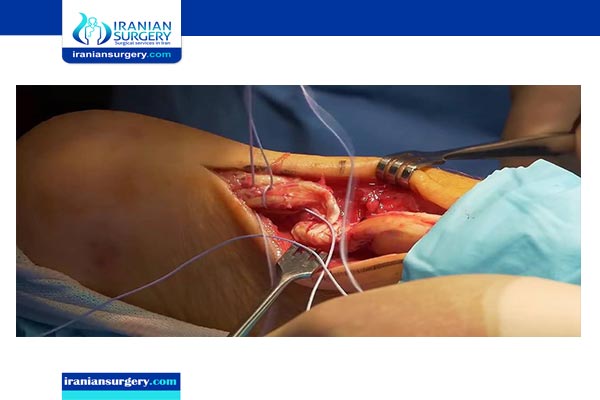 A gap of 2 to 5 cm will usually require a V-Y slide lengthening. When the gap is more than 5 cm, V-Y advancement has been hypothesized to result in increased weakness of the muscle unit. Defects of more than 7 cm will require an Achilles turndown procedure or an allograft replacement.

The incidence of tendo-achilles rupture in the patients 30-40 years of age is increased specially in athletics to reach 75% of all cases . The tendon rupture is called neglected when the treatment is delayed more than four weeks from the date of injury . The percentage of misdiagnosis of Achilles tendon ruptures may reach 20%. The delay in treatment of AT ruptures results in soft tissue retraction with degeneration of the tendon filling the gap between the ruptured ends with fibrotic scar tissue which leads to marked functional disability. In neglected or chronic ruptures of Achilles Tendon (AT), the retraction and atrophy of the tendon ends create a gap filled with scar tissue and fibrosis which make the reconstruction difficult. The extent of the gap and the potential recovery of the muscle are factors that affect the repair after reconstruction.

In the literature, the V-Y myotendinous advancement of the (AT) augmented by multiple transfers like gastrocnemius soleus complex Bosworth technique (a “turndown" of proximal tissue of the (AT)). In the study of Us et al. they reported 23% reduction in peak torque of the tendon after a V-Y lengthening technique for neglected A T ruptures. Therefore, tendon transfer for augmentation of the V-Y advancement was recommended to augment the repair which requires lengthening to approximate the tendon ends for repair to add strength to the plantar flexion of the ankle joint. Many techniques for tendon transfers that augment the AT repair as peroneus brevis (PB) tendon, flexor digitorum longus (FDL) tendon, flexor hallucis longus (FHL) tendon . Different reports of these procedures have yielded satisfactory clinical results but the ankle flexion strength and beak torque deficits were persisted

1How is Achilles tendon surgery performed?
an incision made on the back of the lower leg starting just above the heel bone. After the surgeon finds the two ends of the ruptured tendon, these ends are sewn together with sutures. The incision is then closed. Another repair method makes a small incision on the back of the lower leg at the site of the rupture.
2What kind of anesthesia is used for achilles tendon surgery?
At our institution, repair of ruptured Achilles tendon is typically performed under general anesthesia with the patient's airway secured using an endotracheal tube. Anesthesia is usually maintained with propofol infusion and oxygen/nitrous oxide gas mixture.
3How long does it take to walk after Achilles tendon surgery?
You will need to wear a cast or walking boot for 6 to 12 weeks after surgery. At first, it may be set to keep your foot pointed downward as the tendon heals. You may be able to put weight on your affected leg after a few weeks.
4Is Achilles tendon surgery painful?
Achilles tendon surgery is often an outpatient procedure. This means you can go home the same day. You will have some pain after your surgery, especially in the first few days. Pain medicines will help relieve your pain.
5Is it OK to walk with Achilles tendonitis?
It's usually OK to do non-weight bearing exercises such as swimming, biking, and stretching activities like yoga. If someone with Achilles tendonitis does not rest, the tendon can become more damaged. Your health care provider also may recommend: stretching the Achilles for 30 seconds at a time 3–4 times a day.
6Will Achilles tendon heal itself?
Even in mild cases, it can take weeks to months of rest for the tendon to repair itself. ... The tendon will take weeks to months to heal. Although treatment for Achilles tendon problems takes time, it usually works. Most people can return to sports and other activities.
7Why are my Achilles tendons so tight in the morning?
Cause. Achilles tendinitis is typically not related to a specific injury. The problem results from repetitive stress to the tendon. ... Tight calf muscles—Having tight calf muscles and suddenly starting an aggressive exercise program can put extra stress on the Achilles tendon.
8How long do you stay in hospital after Achilles surgery?
For two or three days after surgery, most patients are instructed to stay off their feet and rest. You may be able to get around more after about three days, but you should continue to elevate your ankle as much as possible and use your crutches to keep weight off your ankle.
9How long can you wait for achilles tendon surgery?
You will spend 6 to 12 weeks after surgery wearing a walking cast or boot. If you sit at work, you can go back in 1 to 2 weeks. If you're on your feet at work, you may need 6 to 8 weeks before you can go back. Your total recovery time can be up to 6 months.
10Can you walk on a partially torn Achilles tendon?
It is best not to walk or stretch the torn or ruptured Achilles tendon, especially if you have extreme pain. “Achilles tendons do not carry robust blood supplies. As such, they do not heal well on their own.