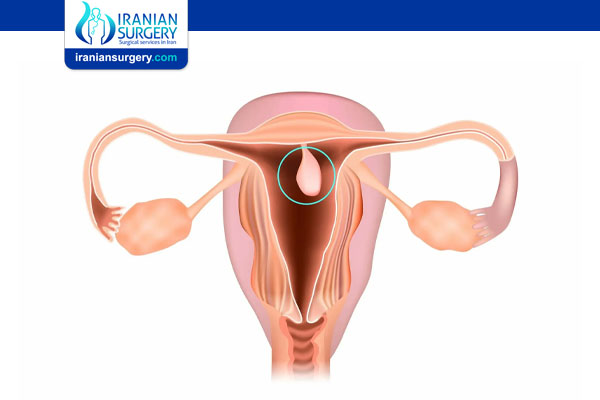 What are Uterine Polyps?

Uterine polyps are growths that occur in the endometrium, the inner lining of the uterus (the organ in which a fetus grows). For that reason, they are sometimes called endometrial polyps.

Uterine polyps are formed by the overgrowth of endometrial tissue. They are attached to the endometrium by a thin stalk or a broad base and extend inward into the uterus. The polyps may be round or oval, and range in size from a few millimeters (the size of a sesame seed) to a few centimeters (the size of a golf ball), or larger. There may be one or several polyps present. Uterine polyps are usually benign (noncancerous), but they may cause problems with periods (menstruation) or the ability to have children (fertility).

Who is affected by uterine polyps?

Uterine polyps are more likely to develop in women who are between 40 and 50 years old than in younger women. Uterine polyps can occur after menopause but rarely occur in women under 20 years old.

Your chances of developing uterine polyps may increase if you are overweight or obese, have high blood pressure (hypertension) or are taking tamoxifen, a drug that is used to treat breast cancer.

The exact reason that polyps form is unknown, but swings in hormone levels may be a factor. Estrogen, which plays a role in causing the endometrium to thicken each month, also appears to be linked to the growth of uterine polyps.

What are the symptoms of uterine polyps?

The symptoms of uterine polyps include the following:

. Bleeding or spotting between periods

. Vaginal spotting or bleeding after menopause

The most common symptom of uterine polyps is irregular or unpredictable menstrual periods. Most women have periods that last four to seven days. A woman's period usually occurs every 28 days, but normal menstrual cycles can range from 21 days to 35 days. Approximately half of women with uterine polyps have irregular periods.

Other symptoms include prolonged or excessive menstrual bleeding (menorrhagia), bleeding between periods, and bleeding after menopause or sexual intercourse. Uterine polyps are the cause of abnormal bleeding in about 25 percent of these cases.

The inability to become pregnant or carry a pregnancy to term may also be signs that uterine polyps are present.

How are uterine polyps diagnosed?

Your doctor will ask you about your menstrual history, including how long your periods last and how often you have them. You should mention any unusual symptoms that you are experiencing, such as excessive bleeding or spotting between periods. The doctor will also ask whether you have had any difficulty becoming pregnant.

The doctor will also perform a gynecological exam and may order additional tests or procedures. Ask your doctor if any treatments such as antibiotics, pain medications, or medication to ease dilation of the cervix are recommended before the procedure.

These tests may include the following:

. Transvaginal ultrasound: this is a procedure in which a slim handheld device called an ultrasound transducer is inserted in the vagina. The device emits sound waves, which provide an image of the interior of the uterus, including any irregularities that may be present.

. Sonohysterography: this is a related procedure that may be performed after the transvaginal ultrasound. A sterile fluid is introduced into the uterus through a thin tube called a catheter. The fluid causes the uterus to expand, providing a clearer image of any growths within the uterine cavity during the ultrasound procedure.

. Hysteroscopy: this may be used to either diagnose or treat uterine polyps. During this procedure, a doctor inserts a long, thin tube with a lighted telescope (hysteroscope) through the vagina and cervix into the uterus. The hysteroscope allows the physician to examine the inside of the uterus. Hysteroscopy is sometimes used in combination with surgery to remove the polyps. See image below.

. Endometrial biopsy: the doctor uses a soft plastic instrument to collect tissue from the inner walls of the uterus. The sample is sent to the laboratory for testing to determine if any abnormalities are present.

. Curettage: done in an operating room, this procedure can both diagnose and treat polyps. The doctor uses a long metal instrument called a curette to collect tissue from the inner walls of the uterus. The curette has a small loop on the end that allows the doctor to scrape tissue or polyps. The tissue or polyps that are removed may be sent to the laboratory for testing to determine if cancer cells are present.

Can uterine polyps be prevented?

There is no way to prevent uterine polyps. It's important to have regular gynecological checkups. Risk factors such as obesity, high blood pressure, or taking tamoxifen to treat breast cancer may increase the chance of developing polyps. Uterine polyps sometimes return after treatment, and additional treatment may be necessary.

How are uterine polyps treated?

Treatment may not be necessary if the polyps do not cause any symptoms. However, polyps should be treated if they cause heavy bleeding during menstrual periods, or if they are suspected to be precancerous or cancerous. They should be removed if they cause problems during pregnancy, such as a miscarriage, or result in infertility in women who want to become pregnant. If a polyp is discovered after menopause, it should be removed.

Methods of treatment include the following:

. Medications: Drugs that help regulate the hormonal balance, such as progestins or gonadotropin-releasing hormone agonists, may be used as a temporary treatment. These medications help to relieve symptoms. However, the symptoms will usually return after the medications are stopped.

. Hysteroscopy: This may also be used as a treatment method. In treatment, the doctor will insert surgical instruments through the hysteroscope to remove any polyps that are found.

. Curettage: This may be performed along with hysteroscopy. While using the hysteroscope to look at the interior of the uterus, the doctor uses a curette to scrape the lining and remove any polyps. The polyps may be sent to a laboratory to determine whether they are benign or cancerous. This technique is effective for smaller polyps.

. Additional surgery may be necessary if a polyp cannot be removed using other methods, or if the polyps are cancerous. A hysterectomy, a surgical procedure in which the entire uterus is removed, may be necessary in cases where cancer cells are found in the uterine polyps.