Thromboangiitis obliterans, also known as Buerger disease (English /bɜːrɡər/, German /byrgər/), is a recurring progressive inflammation and thrombosis(clotting) of small and medium arteries and veins of the hands and feet. It is strongly associated with use of tobacco products, primarily from smoking, but is also associated with smokeless tobacco. 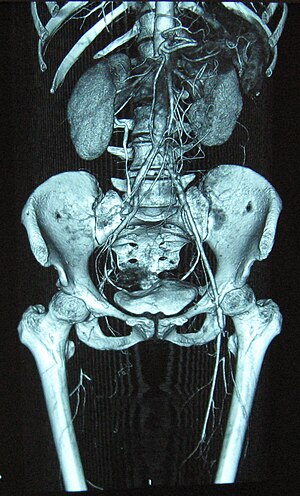 There is a recurrent acute and chronic inflammation and thrombosis of arteries and veins of the hands and feet. The main symptom is pain in the affected areas, at rest and while walking (claudication). The impaired circulation increases sensitivity to cold. Peripheral pulses are diminished or absent. There are color changes in the extremities. The colour may range from cyanotic blue to reddish blue. Skin becomes thin and shiny. Hair growth is reduced. Ulcerationsand gangrene in the extremities are common complications, often resulting in the need for amputation of the involved extremity.

There are characteristic pathologic findings of acute inflammation and thrombosis (clotting) of arteries and veins of the hands and feet (the lower limbs being more common). The mechanisms underlying Buerger’s disease are still largely unknown, but smoking and tobacco consumption are major factors associated with it. It has been suggested that the tobacco may trigger an immune response in susceptible persons or it may unmask a clotting defect, either of which could incite an inflammatory reaction of the vessel wall. This eventually leads to vasculitis and ischemic changes in distal parts of limbs.

A concrete diagnosis of thromboangiitis obliterans is often difficult as it relies heavily on exclusion of other conditions. The commonly followed diagnostic criteria are outlined below although the criteria tend to differ slightly from author to author. Olin (2000) proposes the following criteria:

Buerger’s disease can be mimicked by a wide variety of other diseases that cause diminished blood flow to the extremities. These other disorders must be ruled out with an aggressive evaluation, because their treatments differ substantially from that of Buerger’s disease, for which there is no treatment known to be effective.

Diseases with which Buerger’s disease may be confused include atherosclerosis (build-up of cholesterol plaques in the arteries), endocarditis (an infection of the lining of the heart), other types of vasculitis, severe Raynaud’s phenomenon associated with connective tissue disorders (e.g., lupus or scleroderma), clotting disorders of the blood, and others.

Angiograms of the upper and lower extremities can be helpful in making the diagnosis of Buerger’s disease. In the proper clinical setting, certain angiographic findings are diagnostic of Buerger’s. These findings include a “corkscrew” appearance of arteries that result from vascular damage, particularly the arteries in the region of the wrists and ankles. Collateral circulation gives “tree root” or “spider leg” appearance. Angiograms may also show occlusions (blockages) or stenosis (narrowings) in multiple areas of both the arms and legs. Distal plethysmography also yields useful information about circulatory status in digits. To rule out other forms of vasculitis (by excluding involvement of vascular regions atypical for Buerger’s), it is sometimes necessary to perform angiograms of other body regions (e.g., a mesenteric angiogram).

Skin biopsies of affected extremities are rarely performed because of the frequent concern that a biopsy site near an area poorly perfused with blood will not heal well.

Smoking cessation has been shown to slow the progression of the disease and decrease the severity of amputation in most patients, but does not halt the progression. 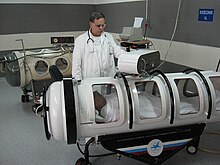 In acute cases, drugs and procedures which cause vasodilation are effective in reducing pain experienced by patient. For example, prostaglandins like Limaprost are vasodilators and give relief of pain, but do not help in changing the course of disease. Epidural anesthesia and hyperbaric oxygen therapy also have vasodilator effect.

In chronic cases, lumbar sympathectomy may be occasionally helpful. It reduces vasoconstriction and increases blood flow to limb. It aids in healing and giving relief from pain of ischemic ulcers. Bypass can sometimes be helpful in treating limbs with poor perfusion secondary to this disease. Use of vascular growth factor and stem cell injections have been showing promise in clinical studies. Debridement is done in necrotic ulcers. In gangrenous digits, amputation is frequently required. Above-kneeand below-knee amputation is rarely required.

Streptokinase has been proposed as adjuvant therapy in some cases.

Despite the clear presence of inflammation in this disorder, anti-inflammatory agents such as corticosteroids have not been shown to be beneficial in healing, but do have significant anti-inflammatory and pain relief qualities in low dosage intermittent form. Similarly, strategies of anticoagulation have not proven effective. physical therapy: interferential current therapy to decrease inflammation

Buerger’s is not immediately fatal. Amputation is common and major amputations (of limbs rather than fingers/toes) are almost twice as common in patients who continue to smoke. Prognosis markedly improves if a person quits smoking. Female patients tend to show much higher longevity rates than men. The only known way to slow the progression of the disease is to abstain from all tobacco products.

Buerger’s is more common among men than women. Although present worldwide, it is more prevalent in the Middle East and Far East. Incidence of thromboangiitis obliterans is 8 to 12 per 100,000 adults in the United States (0.75% of all patients with peripheral vascular disease).