Archaeological evidence shows that the earliest remains of Persepolis date back to 515 BC. André Godard, the French archaeologist who excavated Persepolis in the early 1930s, believed that it was Cyrus the Great who chose the site of Persepolis, but that it was Darius I who built the terrace and the palaces. Inscriptions on these buildings support the belief that they were constructed by Darius.

With Darius I, the scepter passed to a new branch of the royal house. Persepolis probably became the capital of Persia proper during his reign. However, the city’s location in a remote and mountainous region made it an inconvenient residence for the rulers of the empire. The country’s true capitals were Susa, Babylon and Ecbatana. This may be why the Greeks were not acquainted with the city until Alexander the Great took and plundered it.

Darius I’s construction of Persepolis were carried out parallel to those of the Palace of Susa. According to Gene R. Garthwaite, the Susa Palace served as Darius’ model for Persepolis. Darius I ordered the construction of the Apadana and the Council Hall (Tripylon or the “Triple Gate”), as well as the main imperial Treasury and its surroundings. These were completed during the reign of his son, Xerxes I. Further construction of the buildings on the terrace continued until the downfall of the Achaemenid Empire.According to the Encyclopædia Britannica, the Greek historian Ctesias mentioned that Darius I’s grave was in a cliff face that could be reached with an apparatus of ropes.

Around 519 BC, construction of a broad stairway was begun. The stairway was initially planned to be the main entrance to the terrace 20 metres (66 feet) above the ground. The dual stairway, known as the Persepolitan Stairway, was built symmetrically on the western side of the Great Wall. The 111 steps measured 6.9 metres (23 feet) wide, with treads of 31 centimetres (12 inches) and rises of 10 centimetres (3.9 inches). Originally, the steps were believed to have been constructed to allow for nobles and royalty to ascend by horseback. New theories, however, suggest that the shallow risers allowed visiting dignitaries to maintain a regal appearance while ascending. The top of the stairways led to a small yard in the north-eastern side of the terrace, opposite the Gate of All Nations.

Grey limestone was the main building material used at Persepolis. After natural rock had been leveled and the depressions filled in, the terrace was prepared. Major tunnels for sewage were dug underground through the rock. A large elevated water storage tank was carved at the eastern foot of the mountain. Professor Olmstead suggested the cistern was constructed at the same time that construction of the towers began.

The uneven plan of the terrace, including the foundation, acted like a castle, whose angled walls enabled its defenders to target any section of the external front. Diodorus Siculus writes that Persepolis had three walls with ramparts, which all had towers to provide a protected space for the defense personnel. The first wall was 7 metres (23 feet) tall, the second, 14 metres (46 feet) and the third wall, which covered all four sides, was 27 metres (89 feet) in height, though no presence of the wall exists in modern times. 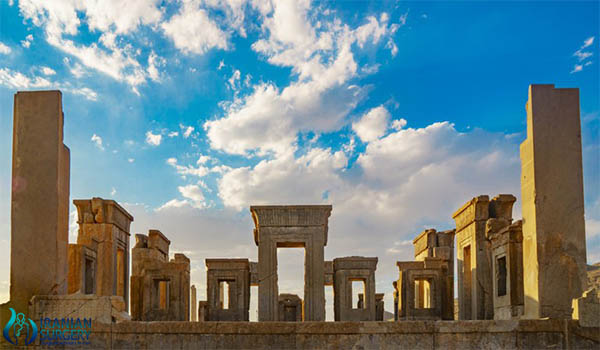 The function of Persepolis remains rather unclear. It was not one of the largest cities in Persia, let alone the rest of the empire, but appears to have been a grand ceremonial complex, that was only occupied seasonally; it is still not entirely clear where the king’s private quarters actually were. Until recent challenges, most archaeologists held that it was especially used for celebrating Nowruz, the Persian New Year, held at the spring equinox, and still an important annual festivity in modern Iran. The Iranian nobility and the tributary parts of the empire came to present gifts to the king, as represented in the stairway reliefs.

After invading Achaemenid Persia in 330 BC, Alexander the Great sent the main force of his army to Persepolis by the Royal Road. He stormed the “Persian Gates”, a pass through modern-day Zagros Mountains. There Ariobarzanes of Persis successfully ambushed Alexander the Great’s army, inflicting heavy casualties. After being held off for 30 days, Alexander the Great outflanked and destroyed the defenders. Ariobarzanes himself was killed either during the battle or during the retreat to Persepolis. Some sources indicate that the Persians were betrayed by a captured tribal chief who showed the Macedonians an alternate path that allowed them to outflank Ariobarzanes in a reversal of Thermopylae. After several months, Alexander allowed his troops to loot Persepolis.