Pasargadae was the capital of the Achaemenid Empire under Cyrus the Great (559–530 BC), who ordered its construction. It is located near the city of Shiraz, in Iran. Today it is an archaeological site and one of Iran’s UNESCO World Heritage Sites. limestone tomb there is believed to be that of Cyrus the Great.

Cyrus the Great began building the capital in 546 BC or later; it was unfinished when he died in battle, in 530 or 529 BC. The remains of the tomb of Cyrus’ son and successor Cambyses II have been found in Pasargadae, near the fortress of Toll-e Takht, and identified in 2006.

Pasargadae remained the capital of the Achaemenid empire until Cambyses II moved it to Susa; later, Darius founded another in Persepolis. The archaeological site covers 1.6 square kilometres and includes a structure commonly believed to be the mausoleum of Cyrus, the fortress of Toll-e Takht sitting on top of a nearby hill, and the remains of two royal palaces and gardens. Pasargadae Persian Gardens provide the earliest known example of the Persian chahar bagh, or fourfold garden design (see Persian Gardens).

The Gate R, located at the eastern edge of the palace area, is the oldest known freestanding propylaeum. It may have been the architectural predecessor of the Gate of All Nations at Persepolis. 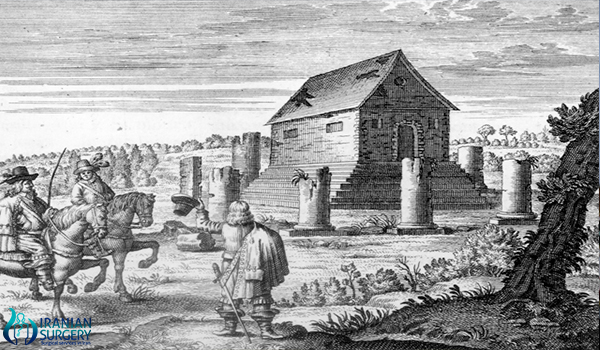 The first capital of the Achaemenid Empire, Pasargadae lies in ruins 40’40 kilometers from Persepolis, in present-day Fars province of Iran.

Pasargadae was first archaeologically explored by the German archaeologist Ernst Herzfeld in 1905, and in one excavation season in 1928, together with his assistant Friedrich Krefter [de].Since 1946, the original documents, notebooks, photographs, fragments of wall paintings and pottery from the early excavations are preserved in the Freer Gallery of Art, Smithsonian Institution, in Washington, DC. After Herzfeld, Sir Aurel Stein completed a site plan for Pasargadae in 1934. In 1935, Erich F. Schmidt produced a series of aerial photographs of the entire complex.

From 1949 to 1955, an Iranian team led by Ali Sami worked there. A British Institute of Persian Studies team led by David Stronach resumed excavation from 1961 to 1963. It was during the 1960s that a pot-hoard known as the Pasargadae Treasure was excavated near the foundations of ‘Pavilion B’ at the site. Dating to the 5th-4th centuries BC, the treasure consists of ornate Achaemenid jewellery made from gold and precious gems and is now housed in the National Museum of Iran and the British Museum.It has been suggested that the treasure was buried as a subsequent action once Alexander the Great approached with his army, then remained buried, hinting at violence.

After a gap, work was resumed by the Iranian Cultural Heritage Organization and the Maison de l’Orient et de la Méditerranée of the University of Lyon in 2000. The complex is one of the key cultural heritage sites for tourism in Iran

There has been growing concern regarding the proposed Sivand Dam, named after the nearby town of Sivand. Despite planning that has stretched over 10 years, Iran’s own Iranian Cultural Heritage Organization was not aware of the broader areas of flooding during much of this time.

Its placement between both the ruins of Pasargadae and Persepolis has many archaeologists and Iranians worried that the dam will flood these UNESCO World Heritage sites, although scientists involved with the construction say this is not obvious because the sites sit above the planned waterline. Of the two sites, Pasargadae is the one considered to be more threatened. Experts agree that the planning of future dam projects in Iran will merit an earlier examination of the risks to cultural resource properties.

Of broadly shared concern to archaeologists is the effect of the increase in humidity caused by the lake. All agree that the humidity created by it will speed up the destruction of Pasargadae, yet experts from the Ministry of Energy believe it could be partially compensated for by controlling the water level of the reservoir.

Construction of the dam began 19 April 2007, with the height of the waterline limited so as to mitigate damage to the ruins.