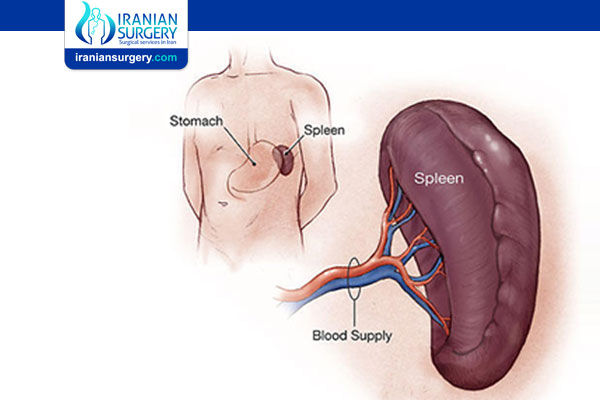 What is a Splenectomy?

Splenectomy is a surgical procedure to remove your spleen. The spleen is an organ that sits under your rib cage on the upper left side of your abdomen. It helps fight infection and filters unneeded material, such as old or damaged blood cells, from your blood.

The most common reason for splenectomy is to treat a ruptured spleen, which is often caused by an abdominal injury. Splenectomy may be used to treat other conditions, including an enlarged spleen that is causing discomfort (splenomegaly), some blood disorders, certain cancers, infection, and noncancerous cysts or tumors.

Splenectomy is most commonly performed using a tiny video camera and special surgical tools (laparoscopic splenectomy). With this type of surgery, you may be able to leave the hospital the same day and recover fully in two weeks.

Iranian surgery is an online medical tourism platform where you can find the best Surgeons in Iran. The price of Splenectomy in Iran can vary according to each individual’s case and will be determined by an in-person assessment with the doctor.

For more information about the cost of Splenectomy in Iran and to schedule an appointment in advance, you can contact Iranian Surgery consultants via WhatsApp number 0098 901 929 0946. This service is completely free.

Splenectomy is used to treat a wide variety of diseases and conditions. Your doctor may recommend splenectomy if you have one of the following:

. Ruptured spleen. If your spleen ruptures due to a severe abdominal injury or because of an enlarged spleen (splenomegaly), the result may be life-threatening, internal bleeding.

. Enlarged spleen. Splenectomy may be done to ease the symptoms of an enlarged spleen, which include pain and a feeling of fullness.

. Blood disorder. Blood disorders that may be treated with splenectomy include idiopathic thrombocytopenic purpura, polycythemia vera and thalassemia. But splenectomy is typically performed only after other treatments have failed to reduce the symptoms of these disorders.

. Infection. A severe infection or the development of a large collection of pus surrounded by inflammation (abscess) in your spleen may require spleen removal if it doesn't respond to other treatment.

. Cyst or tumor. Noncancerous cysts or tumors inside the spleen may require splenectomy if they become large or are difficult to remove completely.

Your doctor may also remove your spleen to help diagnose a condition, especially if you have an enlarged spleen and he or she can't determine why.

Splenectomy is generally a safe procedure. But as with any surgery, splenectomy carries the potential risk of complications, including:

. Injury to nearby organs, including your stomach, pancreas and colon

After spleen removal, you're more likely to contract serious or life-threatening infections. Your doctor may recommend that you receive vaccines against pneumonia, influenza, Haemophilus influenzae type b (Hib) and meningococci. He or she may also recommend that you take preventive antibiotics, especially if you have other conditions that increase your risk of serious infections.

Before your procedure, you may need to temporarily stop taking certain medications and supplements. You may also need to avoid eating or drinking for a certain amount of time. Your doctor will give you specific instructions to help you prepare.

If you have time before the surgery, you may need to receive blood transfusions to ensure that you have enough blood cells after your spleen is removed.

Your doctor may also recommend that you receive a pneumococcal vaccine and possibly other vaccines to help prevent infection after your spleen is removed.

Right before your surgery, you will be given a general anesthetic. The anesthesiologist or anesthetist gives you an anesthetic medication such as a gas — to breathe through a mask — or as a liquid injected into a vein. The surgical team monitors your heart rate, blood pressure and blood oxygen throughout the procedure. You will have heart monitor leads attached to your chest and a blood pressure cuff on your arm.

After you're unconscious, your surgeon begins the surgery using either a minimally invasive (laparoscopic) or open (traditional) procedure. The method used often depends on the size of the spleen. The larger the spleen, the more likely your surgeon will choose to do an open splenectomy.

Laparoscopic splenectomy isn't appropriate for everyone. A ruptured spleen usually requires open splenectomy. In some cases a surgeon may begin with a laparoscopic approach and find it necessary to make a larger incision because of scar tissue from previous operations or other complications.

. Open splenectomy. During open splenectomy, the surgeon makes an incision in the middle of your abdomen and moves aside muscle and other tissue to reveal your spleen. He or she then removes the spleen and closes the incision.

If you had splenectomy due to a ruptured spleen, further treatment usually isn't necessary. If it was done to treat another disorder, additional treatment may be required.

Life without a spleen

After splenectomy, other organs in your body take over most of the functions previously performed by your spleen. You can be active without a spleen, but you're at increased risk of becoming sick or getting serious infections. This risk is highest shortly after surgery. People without a spleen may also have a harder time recovering from an illness or injury.

To reduce your risk of infection, your doctor may recommend vaccines against pneumonia, influenza, Haemophilus influenzae type b (Hib) and meningococci. In some cases, he or she may also recommend preventive antibiotics, especially for children under 5 and those with other conditions that increase the risk of serious infections.

After splenectomy, notify your doctor at the first sign of an infection, such as:

. Redness or tender spots anywhere on the body

. Chills that cause you to shake or shiver

. A cold that lasts longer than usual

Make sure anyone caring for you knows that you've had your spleen removed. Consider wearing a medical alert bracelet that indicates that you don't have a spleen.

1How long does a splenectomy surgery take?
Removing the spleen takes 2 to 4 hours. It is usually done through one (1) or more very small incisions (cuts) in the belly. This makes recovery faster and less painful than for surgery with one (1) big incision
2Can you live without a spleen?
Technically, people can live with no kidneys, but require dialysis. Spleen: The spleen filters blood and helps the body fight infections, but it's not essential for survival. The spleen can be removed if, for instance, it's damaged. However, people without a spleen are more prone to infections.
3What organ takes over after spleen removal?
If your spleen needs to be removed, other organs such as the liver can take over many of the spleen's functions. This means you will still be able to cope with most infections
4Is a splenectomy major surgery?
A splenectomy is surgery to remove the entire spleen, a delicate, fist-sized organ that sits under the left rib cage near the stomach. The spleen is an important part of the body's defense (immune) system. ... If only part of the spleen is removed, the procedure is called a partial splenectomy
5Is spleen removal surgery painful?
After a splenectomy, you are likely to have pain for several days. You may also feel like you have the flu. You may have a low fever and feel tired and nauseated. This is common.
6What vaccines are needed after splenectomy?
Current Center for Disease Control (CDC) recommendations for post-splenectomy vaccinations include the polyvalent pneumococcal (Pneumovax 23), the meningococcal (groups A, C, Y, W-135) polysaccharide diphtheria toxoid conjugate (Menactra, for patients ages 11-55) or the meningococcal polysaccharide (Menomune A/C/Y/W- ...
7Does a splenectomy affect life expectancy?
The median actuarial survival after operation was 51 months. Although the series of patients is small, it seems that splenectomy did not have an adverse effect on life expectancy. The haematological status and the quality of life improved after splenectomy in 17 of 19 patients
8Does not having a spleen shorten your life?
In the past, the spleen was considered unnecessary for life. Today, we know that the spleen is a reticuloendothelial organ with important hematologic and immunological functions, including clearance of bacteria from the blood and generation of immune responses to certain pathogens
9What happens after spleen removal?
Removing your spleen is a major surgery and leaves you with a compromised immune system. For these reasons, it's only performed when truly necessary. The benefits of a splenectomy are that it can resolve several health issues such as blood diseases, cancer, and infection that could not be treated any other way
10Can you drink alcohol after a splenectomy?
DON'T drink alcohol. Long-term use can damage your liver and lead to splenomegaly.