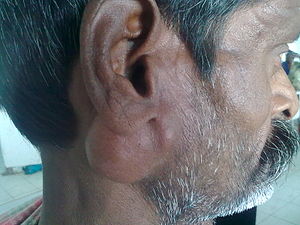 Salivary gland tumours usually present as a lump or swelling in the affected gland which may or may not have been present for a long time. The lump may be accompanied by symptoms of duct blockage (e.g. xerostomia). Usually, in their early stages it is not possible to distinguish a benign tumour from a malignant one. One of the key differentiating symptoms of a malignant growth is nerve involvement; for example, signs of facial nerve damage (e.g facial palsy) are associated with malignant parotid tumours. Facial pain and paraesthesia are also very often associated with malignant tumours. Other red flag symptoms which may suggest malignancy and warrant further investigation are fixation of the lump to the overlying skin, ulceration and induration of the mucosa.

Physical exam and history: An exam of the body to check general signs of health. The head, neck, mouth, and throat will be checked for signs of disease, such as lumps or anything else that seems unusual. A history of the patient’s health habits and past illnesses and treatments will also be taken.

Endoscopy: A procedure to look at organs and tissues inside the body to check for abnormal areas. For salivary gland cancer, an endoscope is inserted into the mouth to look at the mouth, throat, and larynx. An endoscope is a thin, tube-like instrument with a light and a lens for viewing.

Biopsy: The removal of cells or tissues so they can be viewed under a microscope by a pathologist to check for signs of cancer.

Fine needle aspiration (FNA) biopsy: The removal of tissue or fluid using a thin needle. An FNA is the most common type of biopsy used for salivary gland cancer, and has been shown to produce accurate results when differentiating between benign and malignant tumours.

Ultrasound: Ultrasound can be used to initially assess a tumour that is located superficially in either the submandibular or parotid gland. It can distinguish an intrinsic from an extrinsic neoplasm. Ultrasonic images of malignant tumours include ill defined margins.

Due to the diverse nature of salivary gland tumours, many different terms and classification systems have been used. Perhaps the most widely used currently is that system proposed by the World Health Organization in 2004, which classifies salivary neoplasms as primary or secondary, benign or malignant, and also by tissue of origin. This system defines five broad categories of salivary gland neoplasms: 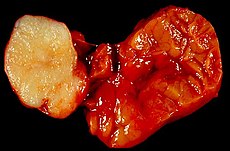 Benign tumour of the submandibular gland, also known as pleomorphic adenoma, presented as a painless neck mass in a 40-year-old man. At the left of the image is the white tumor with its characteristic cartilaginous cut surface. To the right is the normally lobated submandibular salivary gland.

Others, not included in the WHO classification above, include:

Most patients with early-stage lesions that are resectable generally tend to undergo surgery as their initial therapeutic approach, whereas those with advanced or unresectable cancers tend to be treated with radiotherapy (RT) alone or chemoradiotherapy (CRT), which hampered the comparison of the efficacy of RT alone with that of surgery combined with adjuvant RT. But some effort had been made to reflect the role of surgery in salivary gland tumours. 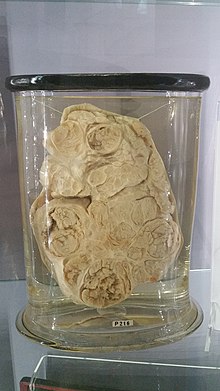 Specimen from a parotid gland tumour. It was removed by John Hunter from a 37-year old man called John Burley on 24 October 1785. The tumour weighed over 4 kilograms and took twenty-five minutes to remove. The specimen currently resides in the Hunterian Museum at the Royal College of Surgeons of England

Treatment may include the following:

Targeted Therapy – Due to the poor results with chemotherapy, it’s urgent to explore novel therapeutic interventions for this disease. And great expectations have been put into individualized therapies: in particular, the EGF receptors family (EGFR and HER2), KIT and androgen receptors are the most commonly investigated molecular targets in SGCs. Their expression seems not to be linked to its pathogenetic role in the development of SGCs, but more to the histogenetic origin of the tumor cells. Various targeted agents, such as imatinib, cetuximab, gefitinib, trastuzumab, had been used for exploring new treatment for salivary gland tumours, but on account of the rare incidence of salivary gland tumours, the number of cases available on targeted therapy for analysis is relatively small.