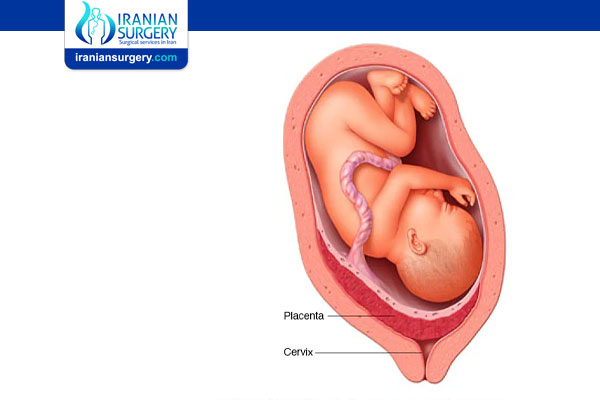 What is Placenta Previa?

Placenta previa occurs when the placenta covers the opening of the cervix during the last months of pregnancy. This condition can cause severe bleeding before or during labor.

The placenta develops in a pregnant person’s uterus during pregnancy. This sac-like organ provides the developing baby with food and oxygen. It also removes waste products from the baby’s blood. The placenta is also referred to as “afterbirth” because it exits the body after the baby is born.

By the third trimester, the placenta should be near the top of the womb. This position allows the cervix, or the entrance to the womb at the bottom of the uterus, a clear path for delivery.

If the placenta attaches instead to the lower part of the uterus, it can cover part or all of the internal opening or “os” of the cervix. When the placenta covers the cervical os during the last months of pregnancy, the condition is known as placenta previa.

Most pregnant people with placenta previa will require pelvic rest. This typically includes abstaining from having sexual intercourse, limiting any procedures like an obstetrical check for dilation, and possibly restricting any exercises that may strain the pelvic floor.

The main symptom of placenta previa is sudden light to heavy bleeding from the vagina. Any bleeding can be representative of problems with the placenta and needs investigation by a physician. Specific symptoms may include:

. Bleeding during the second half of pregnancy

Risk factors for the development of placenta previa include:

. Unusual position of the baby, including breech (buttocks first) or transverse (lying horizontally across the womb)

. Pregnant with twins or other multiples

. Having already given birth to one child

. Prior diagnosis of placenta previa

Pregnant people who are smokers, who are older than 35, or who are of Asian descent are also at higher risk of developing placenta previa.

How is placenta previa diagnosed?

Usually, the first signs of placenta previa will show up during the routine 20-week ultrasound. These initial signs are not necessarily a cause for worry, since the placenta is often lower in the uterus during the early part of a pregnancy.

If you experience any bleeding in the second half of your pregnancy, doctors will monitor the position of the placenta using one of these preferred methods:

. Transvaginal ultrasound. Your doctor places a probe inside the vagina to provide an inside view of your vaginal canal and cervix. This is the preferred and most accurate method for determining placenta previa.

. Transabdominal ultrasound. A healthcare technician places gel on your abdomen and moves a handheld unit called a transducer around your abdomen to view the pelvic organs. The sound waves make a picture on a TV-like screen.

During labor, the cervix will open to allow the baby to move into the vaginal canal for birth. If the placenta is in front of the cervix, it will begin to separate as the cervix opens, causing internal bleeding.

This can necessitate an emergency C-section, even if the baby is premature, as the pregnant person could bleed to death if no action is taken. Vaginal birth also poses too many risks for the pregnant person, who could experience severe hemorrhaging during labor, delivery, or after the first few hours of delivery.

Doctors will decide how to treat your placenta previa based on:

. The amount of bleeding

. The month of your pregnancy

. The position of the placenta and the baby

The amount of bleeding is a doctor’s main consideration when deciding how to treat the condition.

Minimal to no bleeding

For cases of placenta previa with minimal or no bleeding, your doctor will likely suggest pelvic rest. This means refraining from putting anything into your vagina during pregnancy in order to prevent medical complications.

You’ll also be asked to avoid sex and likely exercise as well. If bleeding occurs during this time, you should seek medical care as soon as possible.

In the case of heavy bleeding, your doctor will advise scheduling a cesarean delivery as soon as it’s safe to deliver — preferably after 36 weeks. If the C-section needs to be scheduled sooner, your baby may be given corticosteroid injections to speed up their lung growth.

In the case of uncontrolled bleeding, an emergency cesarean delivery will have to be performed.

Coping and support for pregnant people

A placenta previa diagnosis can be alarming for people who are expecting a baby. Here are some ideas for how to cope with your condition and how to prepare yourself for delivery.

. Get educated. The more you know, the more you’ll know what to expect. Get in contact with other people who have been through placenta previa births.

. Be prepared for your cesarean delivery. Depending on the type of your placenta previa, you might not be able to have a vaginal birth. It’s good to remember the ultimate goal — the health of you and your baby.

. Rest. Pelvic rest is important while you are experiencing this condition. Additionally you should not engage in any strenuous activity or heavy lifting. You can use the time wisely by catching up on small projects, such as:

. Putting together a photo album

. Reading about your upcoming lifestyle change

Pamper yourself. Indulge in small pleasures, such as:

Be sure to rely on your circle of friends and family for conversation and support.