Non-invasive and non-secreting pituitary adenomas are considered to be benign in the literal as well as the clinical sense; however a recent meta-analysis(Fernández-Balsells, et al. 2011) of available research has shown there are to date scant studies – of poor quality – to either support or refute this assumption.

Pituitary macroadenomas are the most common cause of hypopituitarism, and in the majority of cases they are non-secreting adenomas. 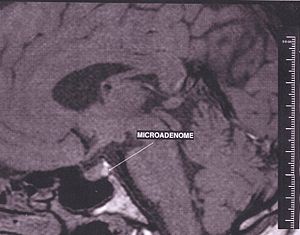 Hormone secreting pituitary adenomas cause one of several forms of hyperpituitarism. The specifics depend on the type of hormone. Some tumors secrete more than one hormone, the most common combination being GH and prolactin, which present as unexpected bone growth and unexpected lactation (in both men and women).

A patient with pituitary adenoma may present with visual field defects, classically bitemporal hemianopsia. It arises from the compression of the optic nerve by the tumor. The specific area of the visual pathway at which compression by these tumours occurs is at the optic chiasma.

Also, a pituitary adenoma can cause symptoms of increased intracranial pressure.

Prolactinomas often start to give symptoms especially during pregnancy, when the hormone progesterone increases the tumor’s growth rate.

Various types of headaches are common in patients with pituitary adenomas. The adenoma may be the prime causative factor behind the headache or may serve to exacerbate a headache caused by other factors. Amongst the types of headaches experienced are both chronic and episodic migraine, and more uncommonly various unilateral headaches; primary stabbing headache, short-lasting unilateral neuralgiform headache attacks with conjunctival injection and tearing (SUNCT) – another type of stabbing headache characterized by short stabs of pain -, cluster headache, and hemicrania continua(HS).

Non-secreting adenomas can go undetected for an extended time because no obvious abnormalities are seen; the gradual reduction in normal activities due to decreased production of hormones is rather less evident. For example, insufficient adrenocorticotropic hormone means that the adrenal glands will not produce sufficient cortisol, resulting in slow recovery from illness, inflammation and chronic fatigue; insufficient growth hormone in children and adolescents leads to diminished stature but which can have many other explanations.

Various psychiatric manifestations have been associated with pituitary disorders including pituitary adenomas. Psychiatric symptoms such as depression, anxiety apathy, emotional instability, easy irritability and hostility have been noted.

Cushing’s disease may cause fatigue, weight gain, fatty deposits around the abdomen and lower back (truncal obesity) and face (“moon face”), stretch marks (striae) on the skin of the abdomen, thighs, breasts and arms, hypertension, glucose intolerance and various infections. In women it may cause excessive growth of facial hair (hirsutism) and in men erectile dysfunction. Psychiatric manifestations may include depression, anxiety, easy irritability and emotional instability. It may also result in various cognitive difficulties.

The diagnosis of CDI is based on the results of urine and blood tests, and a water deprivation test which tests the body’s ability to concentrate urine. CDI is often treated with desmopressin acetate a synthetic vasopressin known as DDAVP administered via nasal spray.

As the pituitary gland is in close proximity to the brain, invasive adenomas may invade the dura mater, cranial bone, or sphenoid bone.

Adenomas of the anterior pituitary gland are a major clinical feature of multiple endocrine neoplasia type 1 (MEN1), a rare inherited endocrine syndrome that affects 1 person in every 30,000. MEN causes various combinations of benign or malignant tumors in various glands in the endocrine system or may cause the glands to become enlarged without forming tumors. It often affects the parathyroid glands, pancreatic islet cells, and anterior lobe of the pituitary gland. MEN1 may also cause non-endocrine tumors such as facial angiofibromas, collagenomas, lipomas, meningiomas, ependymomas, and leiomyomas. Approximately 25 percent of patients with MEN1 develop pituitary adenomas.

Carney complex (CNC), also known as LAMB syndrome and NAME syndrome is an autosomal dominant condition comprising myxomas of the heart and skin, hyperpigmentation of the skin (lentiginosis), and endocrine overactivity and is distinct from Carney’s triad. Approximately 7% of all cardiac myxomas are associated with Carney complex. Patients with CNC develop growth hormone(GH)-producing pituitary tumors and in some instances these same tumors also secrete prolactin. There are however no isolated prolactinomas or any other type of pituitary tumor. In some patients with CNC, the pituitary gland is characterized by hyperplastic areas with the hyperplasia most likely preceding the formation of GH-producing adenomas.

Familial isolated pituitary adenoma (FIPA) is a term that is used to identify a condition that displays an autosomal dominant inheritance and is characterised by the presence of two or more related patients affected by adenomas of the pituitary gland only, with no other associated symptoms that occur in Multiple endocrine neoplasia Type 1 or Carney complex. FIPA was first described in a limited cohort of families by Albert Beckers group in Liège, Belgium; later FIPA was fully characterized in a multicenter international study of 64 families. FIPA families are divided into those that are homogenous and have the same type of pituitary adenoma in all the affected family members (e.g. only acromegaly, only prolactinoma, etc), while heterogeneous FIPA families can have different pituitary adenomas in affected family members.

FIPA has two known genetic causes, mutations in the aryl hydrocarbon interacting protein (AIP) gene, and duplications in chromosome Xq26.3 that include the GPR101 gene that also causes X-linked acrogigantism (X-LAG) syndrome. About 15-20% of FIPA families carry a germline AIP gene mutation or deletion, and the disease occurs as autosomal dominant with incomplete penetrance, meaning that about 20% of AIP mutation carriers will develop a pituitary adenoma. AIP mutation associated pituitary adenomas (either presenting as FIPA or as individual, non familial cases) are usually growth hormone secreting (acromegaly) or prolactin secreting (prolactinoma) adenomas that are large (macroadenomas) and often occur in children, adolescents and young adults. Daly and colleagues showed that acromegaly cases with AIP mutations occurred about 20 years before acromegaly cases without AIP mutations and these tumors are large and relatively treatment resistant. Due to their young age at onset, AIPmutations are the most frequent genetic cause of pituitary gigantism (29% of cases).

X-LAG is a rare syndrome of very early childhood onset pituitary tumors/hyperplasia that leads to growth hormone excess and severe overgrowth and pituitary gigantism. Three FIPA families with X-LAG have been reported to date all of which had transmission of a chromosome Xq26.3 duplication from affected mother to affected son. The disease characteristics of very young onset pituitary gigantismleads to severe overgrowth if not treated adequately; many of the tallest humans in history (e.g. Robert Pershing Wadlow; Sandy Allen, André Rousimoff (Andre the Giant), Zeng Jinlian) had a similar clinical history to patients with X-LAG syndrome. The tallest historical individual with a known genetic cause was Julius Koch (Geant Constantin) who was found to have X-LAG on genetic study of his skeleton.X-LAG has 100% penetrance so far (all affected with the Xq26.3 duplication have the disease and it affects predominantly females. Isolated non familial cases of X-LAG can either have a constitutional duplication of a chromosome Xq26.3 including GPR101, or mosaicism for the duplication (present in a minority of cells) in the case of isolated male patients. X-LAG causes about 10% of cases of pituitary gigantism.

The pituitary gland or hypophysis is often referred to as the “master gland” of the human body. Part of the hypothalamic-pituitary axis, it controls most of the body’s endocrine functions via the secretion of various hormones into the circulatory system. The pituitary gland is located below the brain in a depression (fossa) of the sphenoid bone known as the sella turcica. Although anatomically and functionally connected to the brain, the pituitary gland sits outside the blood–brain barrier. It is separated from the subarachnoid space by the diaphragma sella, therefore the arachnoid mater and thus cerebral spinal fluid cannot enter the sella turcica.

The pituitary gland is divided into two lobes, the anterior lobe (which accounts for two thirds of the volume of the gland), and the posterior lobe (one third of the volume) separated by the pars intermedia.

Diagnosis of pituitary adenoma can be made, or at least suspected, by a constellation of related symptoms presented above.

Tumors which cause visual difficulty are likely to be a macroadenoma greater than 10 mm in diameter; tumors less than 10 mm are microadenoma.

The differential diagnosis includes pituitary tuberculoma, especially in developing countries and in immumocompromised patients. The diagnosis is confirmed by testing hormone levels, and by radiographic imaging of the pituitary (for example, by CT scan or MRI).

Classification based on radioanatomical findings places adenomas into 1 of 4 grades (I–IV):

Stage II: macroadenomas (≥1 cm) and may extend above the sella.

Stage III: macroadenomas with enlargement and invasion of the floor or suprasellar extension.

Stage IV is destruction of the sella.

Pituitary incidentalomas are pituitary tumors that are characterized as an incidental finding. They are often discovered by computed tomography (CT) or magnetic resonance imaging (MRI), performed in the evaluation of unrelated medical conditions such as suspected head trauma, in cancer staging or in the evaluation of nonspecific symptoms such as dizziness and headache. It is not uncommon for them to be discovered at autopsy. In a meta-analysis, adenomas were found in an average of 16.7% in postmortem studies, with most being microadenomas (<10mm); macrodenomas accounted for only 0.16% to 0.2% of the decedents. While non-secreting, noninvasive pituitary microadenomas are generally considered to be literally as well as clinically benign, there are to date scant studies of low quality to support this assertion.

It has been recommended in the current Clinical Practice Guidelines (2011) by the Endocrine Society – a professional, international medical organization in the field of endocrinology and metabolism – that all patients with pituitary incidentalomas undergo a complete medical history and physical examination, laboratory evaluations to screen for hormone hypersecretion and for hypopituitarism. If the lesion is in close proximity to the optic nerves or optic chiasm, a visual field examination should be performed. For those with incidentalomas which do not require surgical removal, follow up clinical assessments and neuroimaging should be performed as well follow-up visual field examinations for incidentalomas that abut or compress the optic nerve and chiasm and follow-up endocrine testing for macroincidentalomas.

An ectopic (occurring in an abnormal place) pituitary adenoma is a rare type of tumor which occurs outside of the sella turcica, most often in the sphenoid sinus, suprasellar region, nasopharynx and the cavernous sinuses.

Metastases to the pituitary gland[

Symptomatic pituitary metastases account for only 7% of reported cases. In those who are symptomatic Diabetes insipidus often occurs with rates approximately 29-71%. Other commonly reported symptoms include anterior pituitary dysfunction, visual field defects, headache/pain, and ophthalmoplegia.

Treatment options depend on the type of tumor and on its size: