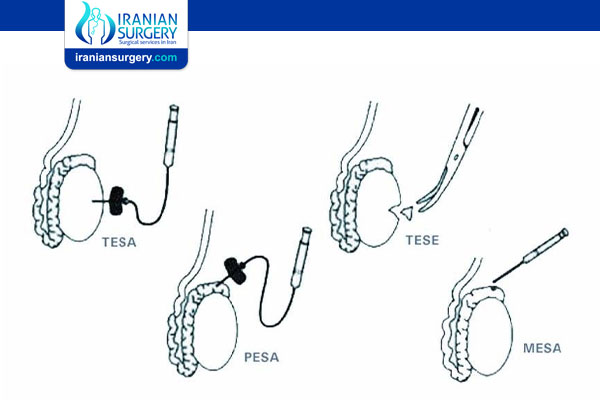 Non-Obstructive Azoospermia (NOA) can be resolved by retrieval of testicular sperm to be used for ICSI. This review on the differences between the leading surgical options currently available for NOA is meant to assist those men who were advised by a physician to consider surgery as the means of retrieving sperm samples. Currently, two main types of surgeries are being performed on patients with non-obstructive azoospermia, regular testicular sperm extraction (TESE), and the more recently added, microsurgical testicular sperm extraction (micro-TESE). The following sections will describe the differences between the procedures in several aspects and will highlight the pros and cons of each surgery in these aspects.

It is very hard to conduct an accurate, meaningful, and comprehensive statistical comparison of patient outcomes these two types of surgeries produce. Many studies have been published on this topic, many of whom came to contradicting conclusions. Therefore, presenting the results of these studies will not be the focus of this review, but rather presenting the unquestionable pros and cons of each surgical procedure.

The difference between the surgeries, in terms of surgical technique, is that a regular TESE surgery is conducted with a ‘closed’ surgical approach, meaning the inside of the testicle remains closed behind the skin that surrounds it and is not visible to the surgeon. In contrast, a micro-TESE is performed with an ‘open’ surgical approach.

A TESE surgery can be performed in your doctor’s office under local anesthesia, moderate sedation, or general anesthesia (completely asleep). During a regular TESE surgery, the outside of the testicle is surgically dissected in only a small number of epicenters, allowing the surgeon to insert the surgical forceps into the testicle to pull a large sample of tissue from the opening he had created. Tissue collection is done ‘blindly’ (i.e. without uncovering the entire testicle to choose the most suitable tissue). The surgeon does not examine the extracted tissue for the existence of sperm cells, instead, the spots on the testicle chosen for cutting into it (aka epicenters) are chosen before the surgery based on the surgeon’s experience and research done on the patients. The length of the TESE surgery is relatively short, only between an hour to ninety minutes.

A micro-TESE surgery the patient will be under general anesthesia (completely asleep) before we start the surgery. During a micro-TESE surgery, a transverse cut through the skin in the center of the testicle is used. Through this opening, the inside of the testicle is ‘pulled out’, and with the help of a surgical microscope, the surgeon examines the seminiferous tubules. He will use micro-surgical forceps (not used in a regular TESE surgery) to gently and thoroughly examine the testicle for evidence of sperm cells, after which he will select for extraction the areas of the testicle that appear to be ‘filled’ with sperm cells and are pink-colored, a characteristic which signifies that they are more likely to contain sperm cells. In total, during the surgery, tissue samples are collected from a large number of epicenters (15-20 on average) across the entire testicle, but from every spot, only a very small and accurate tissue sample is removed. Micro-TESE is a much longer procedure (two and a half to three hours in length).

Only when an entire testicle is thoroughly examined, it can be said that the maximal amount effort was put into finding sperm through the surgical option. The state of sperm production in a man could be non-homogenous in terms of the place of occurrence – could be functional in only one of the two testicles, and even in the sperm-producing testicle, production could occur in only a portion of the seminiferous tubules. In a micro-TESE surgery, where tissue samples are extracted from both testicles, the possibility of missing sperm-producing regions in the testicles is almost completely avoided.

Senior embryologists who participate in sperm searches in tissue taken during a micro-TESE surgery can tell of cases where some samples do not contain any sperm cells at all, while others contain a large amount of sperm cells. Especially in patients whose azoospermia was determined to have a genetic background (Y-chromosome deletions or Klinefelter syndrome), surgeons agree (even those that perform regular TESE) that the percent of surgeries resulting in successfully extracted sperm cells is higher when micro-TESE is employed. In fact, doctors are able to find sperm approximately 60 percent of the time during micro-TESE procedures (also known as the sperm retrieval rate, or SRR). This is in comparison to studies that have found that TESE surgeries can have an acceptable SRR, depending on the number of samples extracted from the testicles (one: 44.5%; two: 51.4%; three: 56.1%; four: 58.4%).

Damage To the Testicles

Every such surgery carries with it a concern over damage to the testicles, in terms of testosterone production and more. Damage can stem from several reasons:

. Tissue extraction - The tissue that is removed from the testicle during surgery is lost for good. Such tissue is where the testicles produce their testosterone, and having less of it means the testosterone production ‘factory’ has lost several pieces of machinery, perhaps permanently limiting testosterone production. When taking this possibility into account, micro-TESE has the advantage, seeing as only a small amount of tissue is removed of the testicle, far less than in a regular TESE surgery (generally, a difference of approximately 50% in the amount of tissue removed can be observed).

. Blood vessels - The testicle contains a large number of blood vessels that feed the different tissues, and when these are compromised, the tissue will undergo necrosis, losing its ability to produce sperm cells and testosterone. These blood vessels are not visible to the naked eye, and a microscope is required in order to detect them. When dealing with the testicles of an azoospermic individual, it is crucial to minimize the amount of damage caused by the surgery, which could further reduce the already low sperm production.

In a micro-TESE surgery, the surgeon inspects the sample he is removing under a microscope, making sure that he is not damaging the blood vessels that surround the tissue during the removal process. Except for being able to pay attention to the integrity of blood vessels, this is a necessity because blood could obstruct his field of view and prevent him from carefully examining and selecting the most suitable tissue for removal. In a regular TESE surgery, where a microscope is not used (a magnifying loop can be used), the surgeon cannot identify blood vessels in the area he is operating on, and thus be able to avoid damaging them.

In every surgery, blood vessels are damaged, the result of cutting into the tissue. In order to stop the bleeding that subsequently occurs, the surgeon uses a dedicated electric needle to burn the site of bleeding (referred to as Electrocauterization). This action stops the bleeding but also kills the burned blood vessels. The needle that is used in micro-TESE for burning tissue is thinner than that used in regular TESE surgeries, about 1:3 ratio in terms of thickness, resulting in far fewer blood vessels that are damaged from the burning process.

The surgeries are meant to collect tissue samples for extensive sperm searches by expert embryologists. The more tissue there is to search through, the lower the possibility of searching through the entire specimen. Hence, tissue collected in micro-TESE surgeries, which collect small quantities of carefully selected tissue, has greater chances of being fully examined, providing an exhaustive and meticulous search of sperm in the tissue. The overall amount of sperm recovered during surgery is higher in micro-TESE surgeries compared to regular TESE, due to the fact that the entire tissue is taken during the surgery, although smaller in total amount, is fully compatible with storage/production of sperm cells. Whereas in a regular TESE surgery, despite being able to search for sperm in larger quantities of tissue taken during the surgery, the tissue that could possibly contain sperm cells, is smaller in size, and relatively less significant.

Summary Of the Discussion:

Those who advocate for the regular TESE surgery (non-microscopic version) claim that there is no point in investing in an expensive and prolonged surgery, which exposes the interior of the testicle for a longer time period and can cause infections as a result. Furthermore, it is claimed, that the complexity of a micro-TESE surgery can result in various complications and side effects.

The proponents of the micro-TESE surgical method also have arguments in favor of their method. First, the surgeon uses tools that enable a substantially better view of the tissue – the powerful surgical microscope and the strong lighting conditions it creates. Some surgeons do indeed utilize a magnifying loop during regular TESE surgeries, trying to produce conditions that allow the tissue to be examined better, but these conditions are far worse than those available during a micro-TESE surgery in many aspects. Therefore, the visibility achieved during a micro-TESE surgery, due to the tools that enable this visibility, which is further enhanced by the exposed testicular tissue, outcompetes that of a regular TESE surgery. Additionally, the microsurgical instruments used by a surgeon performing a micro-TESE surgery allow for delicate and precise actions to be made on the tissue.

Since micro-TESE requires precision surgical skills and because it has a very long learning curve, success in the type of surgery depends maximally on the microsurgeon’s experience, with satisfying sperm retrieval rates beyond the first 100 cases. Therefore, patients must make sure that their surgeon has performed hundreds of micro-TESE surgeries before agreeing to this type of surgery. On the other side, the superiority of micro-TESE SRRs was proven in several studies, even in the different histopathological NOA patterns: 37% vs 14% in SCOS (Sertoli Cell Only Syndrome), 49% vs 27% in Maturation Arrest; 85% vs 73% in Hypospermatogenesis. High micro-TESE SRRs were reported, too, in complicate NOA cases: e.g. due to chemotherapy (48%), previous cryptorchidism (64%), AZFc microdeletions (67%), Klinefelter syndrome; and as a salvage procedure after TESE failure (45-46.5%).

Recap of the advantages of a micro-TESE over regular TESE:

. Use of easier to use surgical instruments.

. Precise and yet more comprehensive extraction of sperm.

. Lesser damaging to the testes.

Iranian surgery is an online medical tourism platform where you can find the best doctors and surgeons in Iran. The price of Testicular Sperm Extraction procedures in Iran can vary according to each individual’s case and will be determined by an in-person assessment with the doctor.

For more information about the cost of Testicular Sperm Extraction procedures in Iran and to schedule an appointment in advance, you can contact Iranian Surgery consultants via WhatsApp number 0098 901 929 0946. This service is completely free.