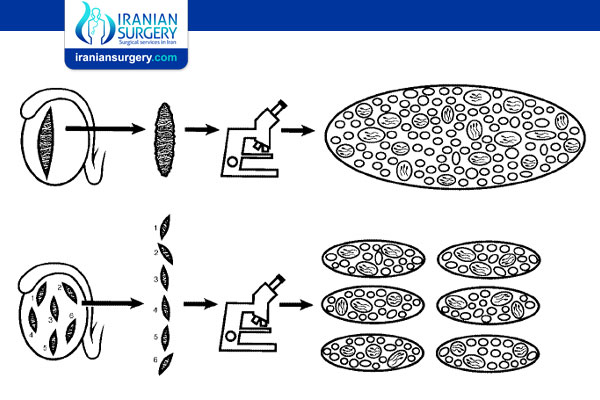 Micro-TESE surgery is defined as examining and sampling testicular tissue under microscopy to search for sperms. This operation is used in males who have not sperm cells in their ejaculate (azoospermia) due to a sperm production disorder (non-obstructive azoospermia). Micro-TESE operation is not indicated in men who have normal sperm production but not sperm ejaculation due to an obstruction, since normal sperm production occurs everywhere in the testicles of these men, and using microscopy to search for sperms is irrelevant.  Spermatozoa can be easily recovered by removing a tissue sample from anywhere in the testis or by needle aspiration of fluid-tissue from the testicular tissue (TESA).

For Which Type of Azoospermic Patients Is Micro-TESE Particularly Important?

Males with the Klinefelter Syndrome, a genetic disorder that affects one in every 500 males in the world, suffer from infertility due to smaller-than-normal testicle size (2-3 mL), reduced testosterone levels, and absence of sperms in the seminal fluid (azoospermia).

Sertoli cell-only syndrome (SCO) is also known as Del Castillo syndrome and germ cell aplasia. Sertoli cells are found in the convoluted seminiferous tubules and form part of the blood-testis barrier in males. They also play an important role in spermatogenesis which is sperm production. The cells respond to a hormone called follicle-stimulating hormone (FSH) that is produced by the anterior pituitary as a response to stimulation by pulsatile release of GnRH by the hypothalamus. Patients with Sertoli cell-only syndrome are typically males between ages 20 to 40. In Sertoli cell-only syndrome, only Sertoli cells line the seminiferous tubules of the testis, and the patients have very low or absent spermatogenesis. These patients are typically normal on physical examination as this condition presents with infertility without sexual abnormality. Diagnosis is usually made based on testicular biopsy findings. Most cases are multifactorial and idiopathic. Patients can still reproduce with assisted reproductive technology.

At present, there is no treatment for Sertoli cell-only syndrome (SCO). However, in some cases, patients with very low sperm counts can still be considered for testicular sperm extraction (TESE). TESE allows removal of the sperm from the patient's testes and the sperm can be used to fertilize an egg via intracytoplasmic sperm injection (ICSI). Some studies have shown that recovery is better with higher FSH levels in the blood.

The rate of successfully retrieving the sperm varies. Multiple factors such as the presence of sperm cells can influence the outcome of TESE and ICSI. Some studies have even suggested that only 13% of patients with Sertoli cell-only syndrome successfully managed to have a child via these procedures.

Couples are also advised to undergo genetic testing to confirm if the children could also be at risk of the condition.

Iranian surgery is an online medical tourism platform where you can find the best fertility specialists in Iran. The price of micro-TESE procedure in Iran can vary according to each individual’s case and will be determined by an in-person assessment with the doctor.