What is an intraparenchymal hemorrhage?

How is intracranial hemorrhage treated?

What is the best treatment option for hemorrhagic strokes?

What is the most common cause of intracerebral hemorrhage?

Can a person recover from brain hemorrhage?

What is an intraparenchymal hemorrhage?

Although headache is frequently associated with bleeding in the brain, it is not always present. Most often, the symptoms associated with a brain hemorrhage are dependent on the particular area of the brain that is involved. If the bleeding is in the part of the brain associated with vision, there may be problems seeing. Problems with balance and coordination, weakness on one side, numbness, or sudden seizure may occur. The speech center for many people is located in the left side of the brain and bleeding into this area may cause marked speech disturbances. If the bleeding is in the lower brain (brainstem), where most of the automatic body functions are regulated, a patient may become unresponsive or go into a coma. Additionally, sometimes symptoms of brain hemorrhage may come on very abruptly and rapidly worsen. Alternatively, the symptoms may progress slowly over many hours or even days.

Read more about : How much does a 15 cm ovarian cyst weigh?

Read more about : What to eat after hemorrhoid surgery?

What is the most common cause of intracerebral hemorrhage?

High blood pressure is the most common cause of ICH. In younger people, another common cause is abnormally formed blood vessels in the brain.

Anyone can have an ICH, but your risk increases with age. men are at slightly higher risk than women. 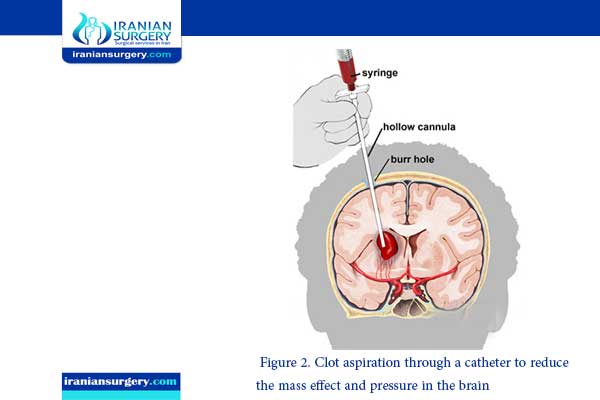 Read more about : Signs a fissure is healing

Read more about : How to pop a bartholin cyst yourself?

How is intracranial hemorrhage treated?

Any type of bleeding inside the skull or brain is a medical emergency. It is important to get the person to a hospital emergency room immediately to determine the cause of the bleeding and begin medical treatment.

If a stroke has occurred, the cause (bleeding or blood clot) must be determined so that the appropriate treatment can be started. Prompt medical treatment can minimize damage to the brain, thereby improving the patient's chance of recovery.

The patient will stay in the stroke unit or intensive care unit (ICU) for close monitoring and care.

Surgery may be necessary in the following situations:

Other treatments may include:

Craniotomy involves cutting a hole in the skull with a drill to expose the brain and remove the clot. Because of the increased risk to the brain, this technique is usually used only when the hematoma is close to the surface of the brain or if it is associated with an AVM or tumor that must also be removed.

Stereotactic clot aspiration is a minimally invasive surgery for large hematomas located deep inside the brain. The procedure uses a stereotactic frame to guide a needle or endoscope directly into the clot. Stereotactic guidance is like the GPS system in your car. It is a navigation based on your presurgical imaging scans. The CT scan helps pinpoint the best trajectory into the hematoma. In the OR, the surgeon drills a small burr hole about the size of quarter in the skull. With the aid of the stereotactic frame, a hollow cannula is passed through the hole, through the brain tissue, directly into the clot. The hollow cannula is attached to a large syringe to withdraw the liquid portion of the blood clot (Fig. 2). A smaller catheter is then inserted to continue draining over the next days to weeks (Fig. 3).

What is the best treatment option for hemorrhagic strokes?

Emergency treatment for stroke depends on whether you're having an ischemic stroke or a stroke that involves bleeding into the brain (hemorrhagic).

To treat an ischemic stroke, doctors must quickly restore blood flow to your brain. This may be done with:

An IV injection of recombinant tissue plasminogen activator (tPA)  also called alteplase (Activase)  is the gold standard treatment for ischemic stroke. An injection of tPA is usually given through a vein in the arm with the first three hours. Sometimes, tPA can be given up to 4.5 hours after stroke symptoms started.

This drug restores blood flow by dissolving the blood clot causing your stroke. By quickly removing the cause of the stroke, it may help people recover more fully from a stroke. Your doctor will consider certain risks, such as potential bleeding in the brain, to determine if tPA is appropriate for you.

-Medications delivered directly to the brain. Doctors insert a long, thin tube (catheter) through an artery in your groin and thread it to your brain to deliver tPA directly where the stroke is happening. The time window for this treatment is somewhat longer than for injected tPA, but is still limited.

-Removing the clot with a stent retriever. Doctors can use a device attached to a catheter to directly remove the clot from the blocked blood vessel in your brain. This procedure is particularly beneficial for people with large clots that can't be completely dissolved with tPA. This procedure is often performed in combination with injected tPA.

The time window when these procedures can be considered has been expanding due to newer imaging technology. Doctors may order perfusion imaging tests (done with CT or MRI) to help determine how likely it is that someone can benefit from endovascular therapy.

To decrease your risk of having another stroke or transient ischemic attack, your doctor may recommend a procedure to open up an artery that's narrowed by plaque. Options vary depending on your situation, but include:

Emergency treatment of hemorrhagic stroke focuses on controlling the bleeding and reducing pressure in your brain caused by the excess fluid. Treatment options include:

Can a person recover from brain hemorrhage?

Many patients who have experienced a brain hemorrhage do survive. However, survival rates are decreased when the bleeding occurs in certain areas of the brain or if the initial bleed was very large.

If a patient survives the initial event of an intracranial hemorrhage, recovery may take many months. Over time and with extensive rehabilitation efforts, including physical, occupational, and speech therapy, patients can regain function. However, some can be left with persistent weakness or sensory problems. Other patients may have residual seizures, headaches, or memory problems.