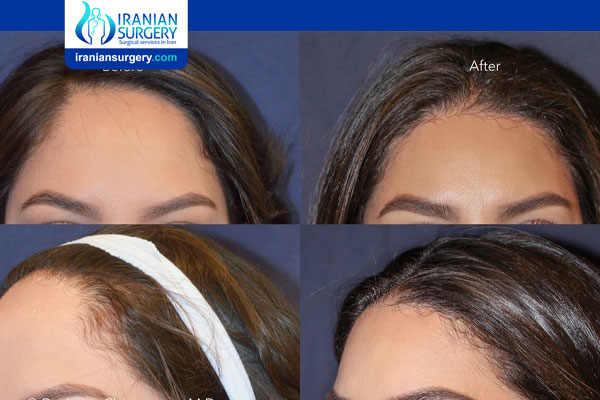 Female hairline lowering is a term used to describe bringing down a high female hairline to a more feminine shape and position. Women with a receding hairline can lower their hairline through surgical lowering or by hair transplant. You can consider a hair transplant for the following reasons: no visible frontal hairline scarring, much smaller recovery time, much more natural hairline shaped and designed specifically for each woman’s head shape and pattern of hair loss.

How Does it Work?

Female hairline lowering involves creating an incision at the front of the hairline and moving this area forward to create a lower hairline starting point. The best surgical approach for your specific needs will depend on multiple factors, including the pattern of baldness, the location and amount of your existing hair, and your personal aesthetic preferences.

Female hairline lowering typically takes between 2 and 3 hours, and is typically performed under twilight anesthesia and a local anesthetic. The procedure will start with your surgeon marking where the new hairline will be. The exact amount of inches that the new hairline can move down to will be determined by how loose a patient’s scalp is. The amount of skin between the current hairline and the “goal” hairline will be surgically excised, and the hair-bearing scalp will be moved forward to the new hairline. The scalp is secured to its new position with bone anchors. The incisions will then be closed.

Your surgeon will minimize the visibility of the incisions as much as possible. They can be placed slightly behind the new hairline, where they will be hidden with hair. In addition, the pattern of the incisions is designed to help them be easily camouflaged.

Patients can typically return to work or school a few days after a hairline lowering procedure. Common side effects include numbness at the hairline, swelling at the forehead and scalp, and mild bruising around the eye area. The numbness can last up to a couple months, but the swelling will subside within two weeks.

The sutures will be removed in one week, during your follow-up appointment. Patients should avoid washing their hair for two days after the hairline lowering surgery. Strenuous activities such as heavy lifting or exercise should be avoided for two weeks.

Your new hairline will look completely natural 3 to 6 months after the procedure. Patients should be aware that sometimes a condition called shock alopecia can occur, in which the entire scalp thins temporarily. This can last a few months.

Iranian surgery is an online medical tourism platform where you can find the best cosmetic surgeons in Iran. The price of Hairline Lowering surgery in Iran can vary according to each individual’s case and will be determined by an in-person assessment with the doctor.

For more information about the cost of Hairline Lowering surgery in Iran and to schedule an appointment in advance, you can contact Iranian Surgery consultants via WhatsApp number 0098 901 929 0946. This service is completely free.