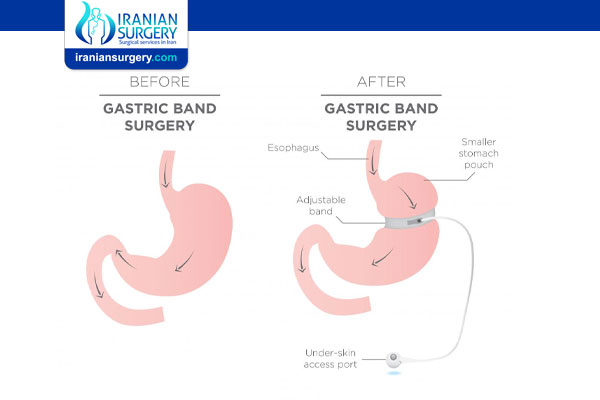 What are the side effects of a gastric band?

How long does a gastric band last?

What can go wrong with gastric band?

The most common problems after gastric banding surgery include: Nausea and vomiting. These can often be reduced by adjusting the tightness of the band. Laparoscopic adjustable gastric banding procedures have a favorable risk-benefit profile and are increasingly important as part of the overall management of obesity.

Read more about :   Weight loss surgery, Before and after Photo after 6 months

These procedures are effective at inducing weight loss and improving comorbid conditions, including diabetes mellitus, hypertension, and sleep apnea. Laparoscopic adjustable gastric banding has several typical complications, and family physicians should recognize these as part of a team-based approach to the management of obesity. Gastric band slippage, port or tubing malfunction, stomal obstruction, band erosion, pouch dilation, and port infection are examples of complications that may occur after laparoscopic adjustable gastric banding. Upper gastrointestinal tract imaging is often required to diagnose these complications. Some complications can be managed in the primary care setting through behavioral diet modification or removal of fluid from the band (band deflation); however, other complications require surgical repair or removal of the band.

The most common problems after gastric banding surgery include:
• Nausea and vomiting. These can often be reduced by adjusting the tightness of the band.
• Minor surgical complications. These include problems with the adjustment device, wound infections, or minor bleeding. They happen less than 10% of the time.

1Is Gastric Banding safe?
Not permanent — the gastric band can be removed at any time, unlike other weight loss surgeries, such as sleeve gastrectomy, which permanently change the digestive tract. Proven safe — most weight loss surgeries are safe and have low mortality rates, but the gastric band's .1% mortality rate is compelling for patients.
2Can you keep a gastric band in forever?
A: Gastric bands do not last forever. A gastric band that deteriorates can kill or seriously harm a patient if it is not removed. Researchers at the European School of Laparoscopic Surgery studied patients with gastric banding devices for 12 years.
3What are the symptoms of a gastric band slippage?
Symptoms of a Band Slip If a band patient suddenly finds that they are vomiting all solids and liquids, vomiting saliva or having chest/abdominal pain that won't go away, they need to be seen immediately.
4How can I reduce my stomach fat?
20 Effective Tips to Lose Belly Fat (Backed by Science) Eat Plenty of Soluble Fiber. ... Avoid Foods That Contain Trans Fats. ... Don't Drink Too Much Alcohol. ... Eat a High-Protein Diet. ... Reduce Your Stress Levels. ... Don't Eat a Lot of Sugary Foods. ... Do Aerobic Exercise (Cardio) ... Cut Back on Carbs, Especially Refined Carbs.
5Can liposuction get rid of belly fat?
Liposuction permanently removes fat cells, altering the shape of the body. However, if the patient does not lead a healthy lifestyle after the operation, there is a risk that the remaining fat cells will grow bigger. The amount of fat that can be safely removed is limited.
6Can you drink alcohol with a gastric band?
When you get permission to start drinking alcohol again, avoid carbonated beverages and sugary drink mixers. Remember that after surgery, even small amounts of alcohol can cause intoxication and low blood sugar. Never drink and drive, even after consuming only minimal alcohol.
7What can you eat after a gastric band?
You will eat only liquid or pureed food for 2 to 3 weeks after your surgery. You will slowly add in soft foods, and then regular foods.
8What foods can you not eat after gastric bypass surgery?
Soft foods Ground lean meat or poultry. Flaked fish. Eggs. Cottage cheese. Cooked or dried cereal. Rice. Canned or soft fresh fruit, without seeds or skin. Cooked vegetables, without skin.
9What does a gastric leak feel like?
Common Abdominal Symptoms Your post bariatric “feeling of fullness” could feel more like the discomfort that is occasionally associated with nausea. Some patients will also develop watering in the mouth or even the eyes.
10What happens if you overeat with a gastric band?
If you overeat after having a Gastric Bypass or Sleeve, the following is likely to happen: Vomiting - Voiding of the stomach is a common response. Diarrhea - Food may wind up in the intestines sooner than it should, leading to diarrhea. ... Plugging - Feeling that food has become stuck in band.