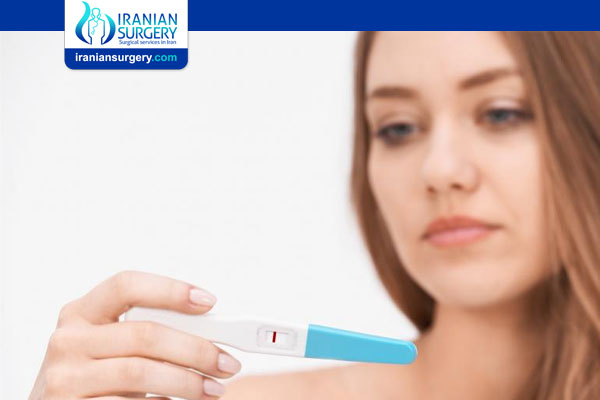 What is Female Infertility?

Infertility is defined as trying to get pregnant with frequent, unprotected sex for at least a year with no success.

Iranian surgery is an online medical tourism platform where you can find the best Gynecologists in Iran. The price of Female Infertility Treatment in Iran can vary according to each individual’s case and will be determined based on in-person assessment with the doctor.

For more information about the cost of Female Infertility Treatment in Iran and to schedule an appointment in advance, you can contact Iranian Surgery consultants via WhatsApp number +98 901 929 0946. This service is completely free.

The main symptom of infertility is the inability to get pregnant. A menstrual cycle that's too long (35 days or more), too short (less than 21 days), irregular or absent can mean that you're not ovulating. There might be no other signs or symptoms.

When to seek help can depend on your age:

. Up to age 35, most doctors recommend trying to get pregnant for at least a year before testing or treatment.

. If you're between 35 and 40, discuss your concerns with your doctor after six months of trying.

. If you're older than 40, your doctor might suggest testing or treatment right away.

Your doctor might also want to begin testing or treatment right away if you or your partner has known fertility problems, or if you have a history of irregular or painful periods, pelvic inflammatory disease, repeated miscarriages, cancer treatment, or endometriosis.

For pregnancy to occur, every step of the human reproduction process has to happen correctly. The steps in this process are:

. One of the two ovaries releases a mature egg.

. The egg is picked up by the fallopian tube.

. Sperm swim up the cervix, through the uterus and into the fallopian tube to reach the egg for fertilization.

. The fertilized egg travels down the fallopian tube to the uterus.

. The fertilized egg attaches (implants) to the inside of the uterus and grows.

In women, a number of factors can disrupt this process at any step. Female infertility is caused by one or more of the factors below.

Ovulating infrequently or not at all accounts for most cases of infertility. Problems with the regulation of reproductive hormones by the hypothalamus or the pituitary gland or problems in the ovary can cause ovulation disorders.

. Polycystic ovary syndrome (PCOS). PCOS causes a hormone imbalance, which affects ovulation. PCOS is associated with insulin resistance and obesity, abnormal hair growth on the face or body, and acne. It's the most common cause of female infertility.

. Hypothalamic dysfunction. Two hormones produced by the pituitary gland are responsible for stimulating ovulation each month — follicle-stimulating hormone (FSH) and luteinizing hormone (LH). Excess physical or emotional stress, a very high or very low body weight, or a recent substantial weight gain or loss can disrupt production of these hormones and affect ovulation. Irregular or absent periods are the most common signs.

. Primary ovarian insufficiency. Also called premature ovarian failure, this is usually caused by an autoimmune response or by premature loss of eggs from your ovary, possibly as a result of genetics or chemotherapy. The ovary no longer produces eggs, and it lowers estrogen production in women under age 40.

. Too much prolactin. The pituitary gland can cause excess production of prolactin (hyperprolactinemia), which reduces estrogen production and can cause infertility. This can also be caused by medications you're taking for another condition.

Damaged or blocked fallopian tubes keep sperm from getting to the egg or block the passage of the fertilized egg into the uterus. Causes of fallopian tube damage or blockage can include:

. Pelvic inflammatory disease, an infection of the uterus and fallopian tubes due to chlamydia, gonorrhea or other sexually transmitted infections

. Previous surgery in the abdomen or pelvis, including surgery for ectopic pregnancy, in which a fertilized egg implants and develops somewhere other than the uterus, usually in a fallopian tube

Endometriosis occurs when tissue that typically grows in the uterus implants and grows in other places. This extra tissue growth — and the surgical removal of it — can cause scarring, which can block fallopian tubes and keep an egg and sperm from uniting.

Endometriosis can also disrupt implantation of the fertilized egg. The condition also seems to affect fertility in less-direct ways, such as damage to the sperm or egg.

Several uterine or cervical causes can interfere with the egg implanting or increase the risk of miscarriage:

. Benign polyps or tumors (fibroids or myomas) are common in the uterus. Some can block fallopian tubes or interfere with implantation, affecting fertility. However, many women who have fibroids or polyps do become pregnant.

. Problems with the uterus present from birth, such as an unusually shaped uterus, can cause problems becoming or remaining pregnant.

. Cervical stenosis, a narrowing of the cervix, can be caused by an inherited malformation or damage to the cervix.

. Sometimes the cervix can't produce the best type of mucus to allow the sperm to travel through the cervix into the uterus.

In some cases, the cause of infertility is never found. A combination of several minor factors in both partners could cause unexplained fertility problems. Although it's frustrating to get no specific answer, this problem can correct itself with time. But you shouldn't delay treatment for infertility.

Certain factors may put you at higher risk of infertility, including:

. Age. The quality and quantity of a woman's eggs begin to decline with age. In the mid-30s, the rate of follicle loss speeds, resulting in fewer and poorer quality eggs. This makes conception more difficult, and increases the risk of miscarriage.

. Smoking. Besides damaging your cervix and fallopian tubes, smoking increases your risk of miscarriage and ectopic pregnancy. It's also thought to age your ovaries and deplete your eggs prematurely. Stop smoking before beginning fertility treatment.

. Weight. Being overweight or significantly underweight may affect ovulation. Getting to a healthy body mass index (BMI) might increase the frequency of ovulation and likelihood of pregnancy.

For women thinking about getting pregnant soon or in the future, these tips might help:

. Maintain a healthy weight. Overweight and underweight women are at increased risk of ovulation disorders. If you need to lose weight, exercise moderately. Strenuous, intense exercise of more than five hours a week has been associated with decreased ovulation.

. Quit smoking. Tobacco has multiple negative effects on fertility, as well as your general health and the health of a fetus. If you smoke and are considering pregnancy, quit now.

. Avoid alcohol. Heavy alcohol use may lead to decreased fertility. And any alcohol use can affect the health of a developing fetus. If you're planning to become pregnant, avoid alcohol, and don't drink alcohol while pregnant.

. Reduce stress. Some studies have shown that stress can cause couples to have poorer results with infertility treatment. Try to reduce stress in your life before trying to become pregnant.

If you've been unable to conceive within a reasonable period of time, seek help from your doctor for evaluation and treatment of infertility. You and your partner should be evaluated. Your doctor will take a detailed medical history and conduct a physical exam.

. Ovulation testing. An at-home, over-the-counter ovulation prediction kit detects the surge in luteinizing hormone (LH) that occurs before ovulation. A blood test for progesterone — a hormone produced after ovulation — can also document that you're ovulating. Other hormone levels, such as prolactin, also might be checked.

. Ovarian reserve testing. This testing helps determine the quality and quantity of eggs available for ovulation. Women at risk of a depleted egg supply — including women older than 35 — might have this series of blood and imaging tests.

. Imaging tests. A pelvic ultrasound looks for uterine or fallopian tube disease. Sometimes a sonohysterogram, also called a saline infusion sonogram, or a hysteroscopy is used to see details inside the uterus that can't be seen on a regular ultrasound.

Depending on your situation, rarely your testing might include:

Using fertility drugs carries some risks, such as:

. Pregnancy with multiples. Oral medications carry a fairly low risk of multiples (less than 10%) and mostly a risk of twins. Your chances increase up to 30% with injectable medications. Injectable fertility medications also carry the major risk of triplets or more.

Generally, the more fetuses you're carrying, the greater the risk of premature labor, low birth weight and later developmental problems. Sometimes, if too many follicles develop, adjusting medications can lower the risk of multiples.

. Ovarian hyperstimulation syndrome (OHSS). Injecting fertility drugs to induce ovulation can cause OHSS, which is rare. Signs and symptoms, which include swollen and painful ovaries, usually go away without treatment, and include mild abdominal pain, bloating, nausea, vomiting and diarrhea.

It's possible to develop a more severe form of OHSS that can also cause rapid weight gain, enlarged painful ovaries, fluid in the abdomen and shortness of breath.

Women who never have pregnancies have an increased risk of ovarian tumors, so it might be related to the underlying problem rather than the treatment. Since success rates are typically higher in the first few treatment cycles, reevaluating medication use every few months and concentrating on the treatments that have the most success appear to be appropriate.

Infertility treatment depends on the cause, your age, how long you've been infertile and personal preferences. Because infertility is a complex disorder, treatment involves significant financial, physical, psychological and time commitments.

Treatments can either attempt to restore fertility through medication or surgery, or help you get pregnant with sophisticated techniques.

Medications that regulate or stimulate ovulation are known as fertility drugs. Fertility drugs are the main treatment for women who are infertile due to ovulation disorders.

Fertility drugs generally work like natural hormones — follicle-stimulating hormone (FSH) and luteinizing hormone (LH) — to trigger ovulation. They're also used in women who ovulate to try to stimulate a better egg or an extra egg or eggs.

. Clomiphene citrate. Taken by mouth, this drug stimulates ovulation by causing the pituitary gland to release more FSH and LH, which stimulate the growth of an ovarian follicle containing an egg. This is generally the first line treatment for women younger than 39 who don't have PCOS.

Another gonadotropin, human chorionic gonadotropin (Ovidrel, Pregnyl), is used to mature the eggs and trigger their release at the time of ovulation. Concerns exist that there's a higher risk of conceiving multiples and having a premature delivery with gonadotropin use.

. Letrozole. Letrozole (Femara) belongs to a class of drugs known as aromatase inhibitors and works in a similar fashion to clomiphene. Letrozole is usually used for woman younger than 39 who have PCOS.

. Bromocriptine. Bromocriptine (Cycloset, Parlodel), a dopamine agonist, might be used when ovulation problems are caused by excess production of prolactin (hyperprolactinemia) by the pituitary gland.

Several surgical procedures can correct problems or otherwise improve female fertility. However, surgical treatments for fertility are rare these days due to the success of other treatments. They include:

. Laparoscopic or hysteroscopic surgery. Surgery might involve correcting problems with the uterine anatomy, removing endometrial polyps and some types of fibroids that misshape the uterine cavity, or removing pelvic or uterine adhesions.

. Tubal surgeries. If your fallopian tubes are blocked or filled with fluid, your doctor might recommend laparoscopic surgery to remove adhesions, dilate a tube or create a new tubal opening. This surgery is rare, as pregnancy rates are usually better with in vitro fertilization (IVF). For this surgery, removal of your tubes or blocking the tubes close to the uterus can improve your chances of pregnancy with IVF.

The most commonly used methods of reproductive assistance include:

. Intrauterine insemination (IUI). During IUI, millions of healthy sperm are placed inside the uterus around the time of ovulation.