A physical cause can be identified in about 80% of cases. These include cardiovascular disease, diabetes mellitus, neurological problems such as following prostatectomy, hypogonadism, and drug side effects. Psychological impotence is where erection or penetration fails due to thoughts or feelings; this is somewhat less frequent, in the order of about 10% of cases. In psychological impotence, there is a strong response to placebo treatment.

Treatment involves addressing the underlying causes, lifestyle modifications, and addressing psychosocial issues. In many cases, a trial of pharmacological therapy with a PDE5 inhibitor, such as sildenafil, can be attempted. In some cases, treatment can involve inserting prostaglandin pellets into the urethra, injecting smooth muscle relaxants and vasodilators into the penis, a penile prosthesis, a penis pump, or vascular reconstructive surgery.It is the most common sexual problem in men. 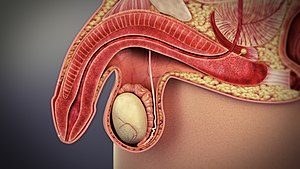 ED is characterized by the regular or repeated inability to achieve or maintain an erection of sufficient rigidity to accomplish sexual activity. It is defined as the "persistent or recurrent inability to achieve and maintain a penile erection of sufficient rigidity to permit satisfactory sexual activity for at least 3 months."

ED often has an impact on the emotional well-being of both men and their partners. Many men do not seek treatment due to feelings of embarrassment. About 75% of diagnosed cases of ED go untreated.

Causes of or contributors to ED include the following:

Surgical intervention for a number of conditions may remove anatomical structures necessary to erection, damage nerves, or impair blood supply. Erectile dysfunction is a common complication of treatments for prostate cancer, including prostatectomy and destruction of the prostate by external beam radiation, although the prostate gland itself is not necessary to achieve an erection. As far as inguinal hernia surgery is concerned, in most cases, and in the absence of postoperative complications, the operative repair can lead to a recovery of the sexual life of people with preoperative sexual dysfunction, while, in most cases, it does not affect people with a preoperative normal sexual life.

ED can also be associated with bicycling due to both neurological and vascular problems due to compression. The increase risk appears to be about 1.7-fold.

Concerns that use of pornography can cause erectile dysfunction have not been substantiated in epidemiological studies according to a 2015 literature review.

Penile erection is managed by two mechanisms: the reflex erection, which is achieved by directly touching the penile shaft, and the psychogenic erection, which is achieved by erotic or emotional stimuli. The former uses the peripheral nerves and the lower parts of the spinal cord, whereas the latter uses the limbic system of the brain. In both cases, an intact neural system is required for a successful and complete erection. Stimulation of the penile shaft by the nervous system leads to the secretion of nitric oxide (NO), which causes the relaxation of smooth muscles of corpora cavernosa (the main erectile tissue of penis), and subsequently penile erection. Additionally, adequate levels of testosterone (produced by the testes) and an intact pituitary gland are required for the development of a healthy erectile system. As can be understood from the mechanisms of a normal erection, impotence may develop due to hormonal deficiency, disorders of the neural system, lack of adequate penile blood supply or psychological problems.Spinal cord injury causes sexual dysfunction including ED. Restriction of blood flow can arise from impaired endothelial function due to the usual causes associated with coronary artery disease, but can also be caused by prolonged exposure to bright light.

Read more about : Disadvantages of having one testicle

In many cases, the diagnosis can be made based on the person's history of symptoms. In other cases, a physical examination and laboratory investigations are done to rule out more serious causes such as hypogonadism or prolactinoma.

One of the first steps is to distinguish between physiological and psychological ED. Determining whether involuntary erections are present is important in eliminating the possibility of psychogenic causes for ED. Obtaining full erections occasionally, such as nocturnal penile tumescence when asleep (that is, when the mind and psychological issues, if any, are less present), tends to suggest that the physical structures are functionally working. Similarly, performance with manual stimulation, as well as any performance anxiety or acute situational ED, may indicate a psychogenic component to ED.

Other factors leading to erectile dysfunction are diabetes mellitus, which is a well-known cause of neuropathy). ED is also related to generally poor physical health, poor dietary habits, obesity, and most specifically cardiovascular disease, such as coronary artery disease and peripheral vascular disease. Screening for cardiovascular risk factors, such as smoking, dyslipidemia, hypertension, and alcoholism is helpful.

In some particular cases, the simple search for a previously undetected groin hernia can prove useful since it can affect sexual functions in men and is relatively easily curable.

The current diagnostic and statistical manual of mental diseases (DSM-IV) has included a listing for ED. 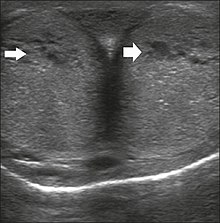 Penile ultrasonography with doppler can be used to examine the penis in erected state. Most cases of erectile dysfunction of organic causes are related to changes in blood flow in the corpora cavernosa, represented by occlusive artery disease, most often of atherosclerotic origin, or due to failure of the veno-occlusive mechanism. Preceding the ultrasound examination with Doppler, the penis should be examined in B mode, in order to identify possible tumors, fibrotic plaques, calcifications, or hematomas, as well as to evaluate the appearance of the cavernous arteries, which can be tortuous or atheromatous.

Erection can be induced by injecting 10-20 µg of prostaglandin E1, with evaluations of the arterial flow every five minutes for 25-30 min (see image). The use of prostaglandin E1 is contraindicated in patients with a predisposition to priapism (e.g., those with sickle cell anemia), as well as in those with an anatomical deformity of the penis or a penile implant. Phentolamine (2 mg) is often added. Visual and tactile stimulation produces better results. Some authors recommend the use of sildenafil by mouth to replace the injectable drugs in cases of contraindications, although the efficacy of such medication is controversial.

Prior to the injection of the chosen drug, the flow pattern is monophasic, with low systolic velocities and an absence of diastolic flow. After injection, it is expected that systolic and diastolic peak velocities will increase, decreasing progressively with vein occlusion and becoming negative when the penis becomes rigid (see image below). The reference values vary across studies, ranging from > 25 cm/s to > 35 cm/s. Values above 35 cm/s indicate the absence of arterial disease, values below 25 cm/s indicate arterial insufficiency, and values of 25-35 cm/s are indeterminate because they are less specific (see image below). The data obtained should be correlated with the degree of erection observed. If the peak systolic velocities are normal, the final diastolic velocities should be evaluated, those above 5 cm/s being associated with venogenic erectile dysfunction.

Nocturnal penile tumescence (NPT)
It is normal for a man to have five to six erections during sleep, especially during rapid eye movement (REM). Their absence may indicate a problem with nerve function or blood supply in the penis. There are two methods for measuring changes in penile rigidity and circumference during nocturnal erection: snap gauge and strain gauge. A significant proportion of men who have no sexual dysfunction nonetheless do not have regular nocturnal erections.

Penile biothesiometry
This test uses electromagnetic vibration to evaluate sensitivity and nerve function in the glans and shaft of the penis.

Dynamic infusion cavernosometry (DICC)
technique in which fluid is pumped into the penis at a known rate and pressure. It gives a measurement of the vascular pressure in the corpus cavernosum during an erection.

Corpus cavernosometry
Cavernosography measurement of the vascular pressure in the corpus cavernosum. Saline is infused under pressure into the corpus cavernosum with a butterfly needle, and the flow rate needed to maintain an erection indicates the degree of venous leakage. The leaking veins responsible may be visualized by infusing a mixture of saline and x-ray contrast medium and performing a cavernosogram.In Digital Subtraction Angiography (DSA), the images are acquired digitally.

Treatment depends on the underlying cause. In general, exercise, particularly of the aerobic type, is effective for preventing ED during midlife. Exercise as a treatment is under investigation. For tobacco smokers, cessation often results in a significant improvement. Oral pharmacotherapy and vacuum erection devices are first-line treatments,, 24 followed by injections of drugs into the penis, as well as penile implants. Vascular reconstructive surgeries are beneficial in certain groups.

The PDE5 inhibitors sildenafil (Viagra), vardenafil (Levitra) and tadalafil (Cialis) are prescription drugs which are taken orally. Additionally, a cream combining alprostadil with the permeation enhancer DDAIP has been approved in Canada as a first line treatment for erectile dysfunction. Penile injections, on the other hand, can involve one of the following medications: papaverine, phentolamine, and prostaglandin E1, also known as alprostadil.

A vacuum erection device helps draw blood into the penis by applying negative pressure. This type of device is sometimes referred to as penis pump and may be used just prior to sexual intercourse. Several types of FDA approved vacuum therapy devices are available under prescription. When pharmacological methods fail, a purpose-designed external vacuum pump can be used to attain erection, with a separate compression ring fitted to the base of the penis to maintain it. These pumps should be distinguished from other penis pumps (supplied without compression rings) which, rather than being used for temporary treatment of impotence, are claimed to increase penis length if used frequently, or vibrate as an aid to masturbation. More drastically, inflatable or rigid penile implants may be fitted surgically.

Often, as a last resort if other treatments have failed, the most common procedure is prosthetic implants which involves the insertion of artificial rods into the penis. Some sources show that vascular reconstructive surgeries are viable options for some people.

The Food and Drug Administration (FDA) does not recommend alternative therapies to treat sexual dysfunction. Many products are advertised as "herbal viagra" or "natural" sexual enhancement products, but no clinical trials or scientific studies support the effectiveness of these products for the treatment of ED, and synthetic chemical compounds similar to sildenafil have been found as adulterants in many of these products. The FDA has warned consumers that any sexual enhancement product that claims to work as well as prescription products is likely to contain such a contaminant.

The Latin term impotentia coeundi describes simple inability to insert the penis into the vagina; it is now mostly replaced by more precise terms, such as erectile dysfunction (ED). The study of ED within medicine is covered by andrology, a sub-field within urology. Research indicates that ED is common, and it is suggested that approximately 40% of males experience symptoms compatible with ED, at least occasionally. The condition is also on occasion called phallic impotence. Its antonym, or opposite condition, is priapism.