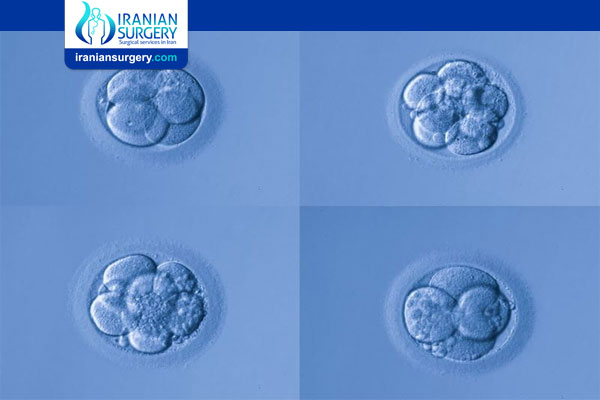 When it’s time to transfer your embryo(s) into the uterus during an IVF cycle, the embryos are carefully observed, inspected and graded as they develop. The embryo(s) with the highest grade typically have the best chance of developing into a successful pregnancy and are chosen to transfer. Any high-quality embryos left over from an IVF cycle can be frozen to use in a later transfer, if desired. Embryo freezing is typically done by the vitrification process and does not damage the embryo. Vitrified embryos can be stored indefinitely.

The Life of an Embryo

During an IVF cycle, a woman’s ovaries are stimulated with medication to develop multiple follicles/eggs. Once the mature eggs are retrieved from the ovaries, they are fertilized with her partner’s or donor’s sperm. The eggs may be mixed with thousands of sperm in a lab dish to be fertilized by one sperm entering the egg, or intracytoplasmic sperm injection (ICSI) may be used. Once it is determined that fertilization has occurred, each embryo will be carefully observed by skilled embryologists as they develop over time.

. Day One- When an egg and sperm combine during fertilization, a new single-cell is created which is called a zygote.

. Day Two- Now in the cleavage stage of development, the embryos will divide and two distinct cells appear. The embryo’s cells will now divide and multiply each day.

. Day Three- The embryos continue dividing and the cells are distinguishable inside it. There are typically 4-8 cells in a day three embryo.

. Day Four- The embryos continue to divide rapidly. They phase into the morula stage and typically contain 16-30 cells.  If the cells have reached this stage they will likely make it to the blastocyst stage (around 120 cells) the next day.

. Day Five- By the fifth day, embryos should be reaching the blastocyst stage of development. The number of cells inside of the embryo continues to increase and has started to outgrow the space inside the zona pellucida- the protective shell that surrounds the embryo. Once the zona pellucida breaks, it can emerge or “hatch.”  *It is important to note that some embryos may grow at a different rate than others and may reach the blastocyst on day six instead of day five.

Embryo grading may be done at the cleavage stage (day three) and/or the blastocyst stage (day five). Different characteristics are evaluated at each stage to determine the grade given to each embryo.

Embryo grading at the cleavage stage includes evaluating the number and appearance of the cells, (called blastomeres), and the degree of fragmentation. Fragmentation is the presence of small pieces of cellular material (cytoplasm) that have broken off during cell division. Most normal day three embryos will contain between 6 and 10 cells. If the embryo’s number of cells is within the normal range, it can go on to be graded based on its overall appearance. Iranian Surgery lab counts the number of cells presents and grades A, A-, B+, B, B-, or C. The grade of A is the highest and rarely given. C is considered nonviable and will not be transferred.

. Grade A/Excellent- Cells are similar, no fragmentation is seen

. Grade C/Poor- Cells can be similar or not, fragmentation is moderate to heavy (>50%)

From day three to day five, embryos can grow into blastocysts. Grading blastocysts is different from cleavage grading. It is important to observe how expanded the fluid and cells are inside of the cavity of the embryo. The more expanded an embryo is, the closer the embryo is to hatching out of the zona pellucida. A number stage from 1-6 is given based on this, 1 being least expanded(morula), 2 (early blastocyst), 3 (blastocyst), 4 (expanded blastocyst), 5 (hatching blastocyst, to 6 being fully hatched blastocyst. In addition, each blastocyst contains 2 types of cells- one group of cells develops to form the placental tissue (trophectoderm/ outer cell mass/OCM), and the other group goes on to form the fetus (inner cell mass/ICM). Both cell types are each important to the viability of the embryo, thus each is given an independent grade, from A-D.

. Grade A (Good)- Numerous cells that appear healthy and are tightly compacted.

. Grade B (Fair)- Large cells that are loosely compacted.

. Grade A (Good)- Many cells forming of the trophoblast.

. Grade B (Fair)- A few large cells forming the trophoblast.

It is important to note that not all highly graded embryos are guaranteed to succeed, and not all lower graded embryos will fail. Grading helps the embryologists assess the embryos and guide the choice for which embryos to transfer and/or freeze later over others if there are multiple embryos to choose from in an IVF cycle.