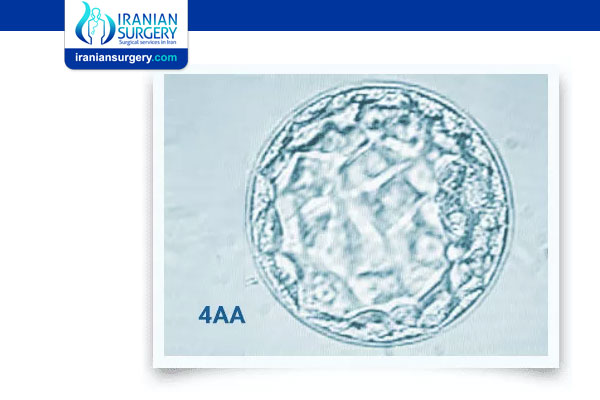 More than 1.5 percent of all babies born annually in the United States are the result of ART — or babies born from pregnancies that were possible thanks to assisted reproductive technology. Reaching the end of the fertility trail with a prize to cuddle can be a physically and emotionally draining trek that covers so much uncharted territory. Embryo grading is one of the many bridges you cross along the way. Knowing what embryo grading is all about can make the journey easier and even (dare we say it?) exciting. Let’s dive in.

If You Have Day 3 Embryos

You’re past egg retrieval. You’re even past the first discussion of your fertilization report and have now hit day 3 — the exciting day when your fertilized embryos are graded for the first time. Some people will have embryos transferred to the uterus once they reach day 3.

Exactly what are day 3 embryos? At this stage, the cells inside the embryos are dividing — embryologists call this the “cleavage” stage — but they aren’t growing in size. The embryos are still at the same size as an unfertilized egg. You can think of them as birthday cakes divided into slices. (The size of the cake doesn’t change when you slice it, but the number of pieces does.)

At day 3, embryologists use a high-power microscope to take a look at the morphology (a fancy word for “structure”) of the embryo. They’re looking mainly at two things:

. the number of cells in the embryo

. what they look like (yes, appearance counts even as early as this stage!)

An embryo that’s dividing well should ideally have between 6 to 10 cells by day 3. Research shows that 8 is best. (Day 3 embryos that had 8 or more cells showed a significantly higher live birth rate). However, not all good quality embryos follow the rules. Some embryos will have 3, 5, or 6 cells, and that’s because cells don’t divide at the same time. So, the rule of thumb is that although things aren’t clear cut, it does seem that the number of cells in an embryo is the best indicator of whether an embryo will thrive or not.

While it’s relatively easy to count the number of cells you see in a day 3 embryo, cell appearance is harder to grade. This is especially so because sometimes you aren’t looking at the embryo head-on, but at a tangent. Day 3 embryos are graded 1 to 4 (or 5) depending on the lab protocol with 1 being the highest grade.

So, what are embryologists looking for? They want to see that each cell has a nucleus and that the cells are of equal size.

They also check for fragmentation. This sometimes occurs when cells divide. Think of the crumbs falling off that birthday cake. Up to 20 percent fragmentation is fine. More than that and the cells lose too much cytoplasm (cell contents) for optimal function. Other things that fertility specialists will take into account when examining a 3-day embryo are:

. Compaction — are the cells compacted and readying for the next stage, which is forming a blastocyst?

. Cytoplasmic pitting — are there depressions in the cell contents? Research is divided about what this means.

. Vacuoles — are there fluid-filled pockets?

If You Have Day 5 Embryos

Some fertility clinics prefer to transfer embryos once they reach day 5. Your embryo (now called a blastocyst) is hard at work dividing and building up the number of cells. Here’s where division of labor comes in:

. Some of the cells form the inner cell mass (ICM). These develop into the fetus.

. Some of the cells form the trophectoderm epithelium (TE). These develop into the placenta and other tissues that your body needs for the pregnancy.

At this point, things are getting pretty cramped inside the shell (zona pellucida or ZP for short) that surrounds the embryo — and the shell is being pushed to its limits. As the embryo readies to burst through and implant itself in the lining of your uterus, the membrane of the ZP shell start to thin out.

If you thought that grading a day 3 embryo was challenging, things get even more complicated with day 5 embryos. Although grading is more or less universal, every fertility center has a unique system and that accounts for the slight differences that you may see in grades.

Heads up: Blastocyst grading is complex and that means that grades aren’t carved in stone and may change.

What’s being graded this time round?

. The amount that the blastocyst has expanded. The part of the embryo that’s being measured here is the blastocoel. The blastocoel is the fluid-filled cavity that forms within the embryo. Grades range from 1 to 6, with 6 being the most developed.

. The quality of the ICM. Remember, the ICM forms the fetus. Here, grades range from A to C, with A being the best quality.

. The quality of the TE. The TE forms the placenta and other pregnancy-related tissues. Grades range from A to C, with A being the best quality.

Again, your day 5 embryos are typically graded according to a number followed by two letters. These charts show the options for the number and each letter.

First letter: Grade of ICM, which develops into the fetus

Second letter: Grade of TE, which develops into the placenta and other supporting cells

There’s still a lot going on here that researchers aren’t sure about. Remember the cytoplasmic pitting we mentioned? Researchers are divided whether this is a good sign or something to worry about. The one thing we are sure about is that the grades given to an embryo gets don’t necessarily seal its future.

For example, at first glance, getting a C grade on the quality of ICM may seem like bad news. But that isn’t necessarily true. An embryo with a C grade ICM may be still developing. Give it another day and the ICM may compact into an A.

Same goes for blastocoel expansion rates. A 1 can grow into 6 within a day.

So, if you have a couple frozen embryos — say, a 5AA and a 4BC — and the highest quality (at least according to grade) one doesn’t result in a live birth, there still could be good news. The second embryo may still be successful and result in a perfectly healthy child. In fact, this scenario (the presumably lower quality embryo resulting in pregnancy and birth) has played out many, many times.

Bottom line: It’s hard to know, based on grading alone, what your success will be. We know that’s a less than satisfying answer, but it does mean you shouldn’t lose hope.

Researchers are now looking into another factor that could impact embryo assessment: metabolomics. Think of this as studying the chemical fingerprints left behind by processes that happen in the cell. This could change the grade that an embryo receives.

Embryo grading is one step in a journey that may often seem endless. That’s why it’s important to keep your eye on the goal. Your medical team takes a host of other factors into account when they make the decision to transfer: your age, fertility history, which embryos to transfer, how many embryos to transfer and which day will most likely lead to a successful pregnancy. So tuck away all of this information in a corner of your mind and go shopping for those snugglies. You’ll likely need them soon.