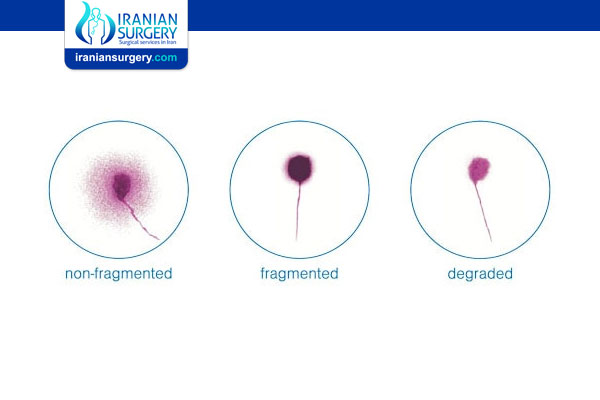 Research demonstrates that men who have high levels of sperm DNA fragmentation are also more likely to have other abnormal semen parameters, such as poor sperm motility or morphology. In one 2002 study of 88 infertile men, researchers found that the average level of DNA damage was significantly higher among those with other abnormal semen parameters.

This was confirmed in a 2009 study, in which higher sperm DNA damage was correlated with poorer semen parameters (sperm concentration, motility, morphology). Patients with abnormal results in all three categories had higher levels of sperm DNA fragmentation and were more likely to have a high DNA fragmentation index  (over 30%) than patients with normal semen parameters.

This can be seen even in studies of those with just one problem with their sperm. In a 2014 study of 196 semen samples, it was found that men with teratozoospermia, a high level of abnormally shaped sperm, had a higher average DNA fragmentation index than men with normal sperm morphology.

Why does this happen? It’s probable that the same underlying factors that contribute to abnormal semen parameters, such as advanced paternal age, smoking, or toxin exposure, also cause high levels of sperm DNA fragmentation. There may be other connections or mechanisms connecting these measures, as well.

First, a note: conception is absolutely possible for those with high sperm DNA fragmentation. Even in studies that report lower pregnancy rates, longer time to conception, or higher miscarriage rates among men with a high DNA fragmentation index, researchers note that full-term pregnancies have been achieved.

That being said, studies demonstrate that men with high rates of sperm DNA fragmentation are at an increased risk for infertility. In one study, men presenting for infertility evaluation, who had not been able to achieve a pregnancy for a year or more, had, on average, over twice as many sperm with DNA fragmentation than fertile men (27.6% vs. 13.3%).

In another study, couples experiencing infertility or miscarriage were more likely to have a male partner with moderate or high levels of sperm DNA fragmentation. Researchers concluded that “spermatozoa with denatured DNA… were the best predictor for whether a couple would not achieve pregnancy.”

Iranian surgery is an online medical tourism platform where you can find the best doctors and reproductive specialists in Iran. The price of Infertility Treatment in Iran can vary according to each individual’s case and will be determined by an in-person assessment with the doctor.

For more information about the cost of Infertility Treatment in Iran and to schedule an appointment in advance, you can contact Iranian Surgery consultants via WhatsApp number 0098 901 929 0946. This service is completely free.