A distal radius fracture, also known as wrist fracture, is a break of the part of the radius bone which is close to the wrist. Symptoms include pain, bruising, and rapid-onset swelling. The wrist may be deformed. The ulna bone may also be broken.

In younger people, these fractures typically occur during sports or a motor vehicle collision. In older people, the most common cause is falling on an outstretched hand. Specific types include Colles, Smith, Barton, and Chauffeur’s fractures. The diagnosis is generally suspected based on symptoms and confirmed with X-rays.

Treatment is with casting for six weeks or surgery. Surgery is generally indicated if the joint surface is broken and does not line up, the radius is overly short, or the joint surface of the radius is tilted more than 10% backwards. Among those who are cast, repeated X-rays are recommended within three weeks to verify that a good position is maintained.

Distal radius fractures are common. They represent between 25% and 50% of all broken bones. They occur most commonly in young males and older females. A year or two may be required for healing to occur.

People usually present with a history of falling on an outstretched hand and complaint of pain and swelling around the wrist, sometimes with deformity around the wrist. Any numbness should be asked to exclude median and ulnar nerve injuries. Any pain in the limb of the same side should also be investigated to exclude associated injuries to the same limb.

Swelling, deformity, tenderness, and loss of wrist motion are normal features on examination of a person with a distal radius fracture. “Dinner fork” deformity of the wrist is caused by dorsal displacement of the carpal bones (Colle’s fracture). Reverse deformity is seen in volar angulation (Smith’s fracture). The wrist may be radially deviated due to shortening of the radius bone. Examination should also rule out a skin wound which might suggest an open fracture, usually at the side. Tenderness at an area with no obvious deformity may still point to underlying fractures. Decreased sensation over the thenar eminence can be due to median nerve injury. Swelling and displacement can cause compression on the median nerve which results in acute carpal tunnel syndrome and requires prompt treatment. Very rarely, pressure on the muscle components of the hand or forearm is sufficient to create a compartment syndrome. 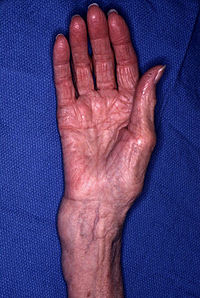 Malreduced distal radius fracture demonstrating the deformity in the wrist 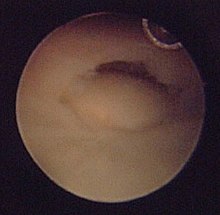 The most common cause of this type of fracture is a fall on an outstretched hand from standing height, although some fractures will be due to high-energy injury. People who fall on the outstretched hand are usually fitter and have better reflexes when compared to those with elbow or humerus fractures. The characteristics of distal radius fractures are influenced by the position of the hand at the time of impact, the type of surface at point of contact, the speed of the impact, and the strength of the bone. Distal radius fractures typically occur with the wrist bent back from 60 to 90 degrees. Radial styloid fracture would occur if the wrist is ulnar deviated and vice versa. If the wrist is bent back less, then proximal forearm fracture would occur, but if the bending back is more, then the carpal bones fracture would occur. With increased bending back, more force is required to produce a fracture. More force is required to produce a fracture in males than females. Risk of injury increases in those with osteoporosis.

Common injuries associated with distal radius fractures are interosseous intercarpal ligaments injuries, especially scapholunate (4.7% to 46% of cases) and lunotriquetral ligaments (12% to 34% of cases) injuries. There is an increased risk of interosseous intercarpal injury if the ulnar variance (the difference in height between the distal end of the ulna and the distal end of the radius) is more than 2mm and there is fracture into the wrist joint. Triangular fibrocartilage complex (TFCC) injury occurs in 39% to 82% of cases. Ulnar styloid process fracture increases the risk of TFCC injury by a factor of 5:1. However, it is unclear whether intercarpal ligaments and triangular fibrocartilage injuries are associated with long term pain and disability for those who are affected. 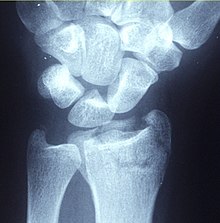 X-ray of a displaced intra-articular distal radius fracture in an external fixator: The articular surface is widely displaced and irregular.

Diagnosis may be evident clinically when the distal radius is deformed, but should be confirmed by X-ray. The differential diagnosis includes scaphoid fractures and wrist dislocations, which can also co-exist with a distal radius fracture. Occasionally, fractures may not be seen on X-rays immediately after the injury. Delayed X-rays, X-ray computed tomography (CT scan), or Magnetic resonance imaging (MRI) can confirm the diagnosis.

Fracture with a dorsal tilt: Dorsal is left, and volar is right in the image.

X-ray of the affected wrist is required if a fracture is suspected. Posteroanterior, lateral, and oblique views can be used together to describe the fracture. X-ray of the uninjured wrist should also be taken to determine if any normal anatomic variations exist before surgery.

A CT scan is often performed to further investigate the articular anatomy of the fracture, especially for fracture and displacement within the distal radio-ulnar joint.

Various kinds of information can be obtained from X-rays of the wrist:

Posttraumatic arthritis of the wrist, degeneration of the articular surface before and after resection 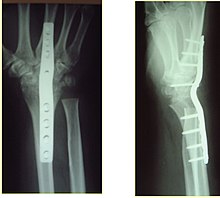 X-rays of a wrist fusion 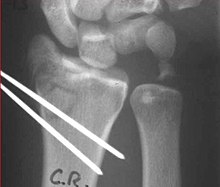 X-rays of pins across a distal radius fracture: Notice the ulnar styloid base fracture, which has not been fixed. This patient has instability of the DRUJ because the TFCC is not in continuity with the ulna.

Correction should be undertaken if the wrist radiology falls outside the acceptable limits:

Treatment options for distal radius fractures include nonoperative management, external fixation, and internal fixation. Indications for each depend on a variety of factors such as the patient’s age, initial fracture displacement, and metaphyseal and articular alignment, with the ultimate goal to maximize strength and function in the affected upper extremity. Surgeons use these factors combined with radiologic imaging to predict fracture instability, and functional outcome to help decide which approach would be most appropriate. Treatment is often directed to restore normal anatomy to avoid the possibility of malunion, which may cause decreased strength in the hand and wrist. The decision to pursue a specific type of management varies greatly by geography, physician specialty (hand surgeons vs. orthopedic surgeons), and advancements in new technology such as the volar locking plating system.