Cryosurgery is the use of extreme cold in surgery to destroy abnormal or diseased tissue; thus, it is the surgical application of cryoablation. The term comes from the Greek words cryo (κρύο) (“icy cold”) and surgery (cheirourgiki – χειρουργική) meaning “hand work” or “handiwork”. Cryosurgery has been historically used to treat a number of diseases and disorders, especially a variety of benign and malignant skin conditions.

Warts, moles, skin tags, solar keratoses, Morton’s neuroma and small skin cancers are candidates for cryosurgical treatment. Several internal disorders are also treated with cryosurgery, including liver cancer, prostate cancer, lung cancer, oral cancers, cervical disorders and, more commonly in the past, hemorrhoids. Soft tissue conditions such as plantar fasciitis (jogger’s heel) and fibroma (benign excrescence of connective tissue) can be treated with cryosurgery. Generally, all tumors that can be reached by the cryoprobes used during an operation are treatable. Although found to be effective, this method of treatment is only appropriate for use against localized disease, and solid tumors larger than 1 cm. Tiny, diffuse metastases that often coincide with cancers are usually not affected by cryotherapy.

Cryosurgery works by taking advantage of the destructive force of freezing temperatures on cells. When their temperature sinks beyond a certain level ice crystals begin forming inside the cells and, because of their lower density, eventually tear apart those cells. Further harm to malignant growth will result once the blood vessels supplying the affected tissue begin to freeze. 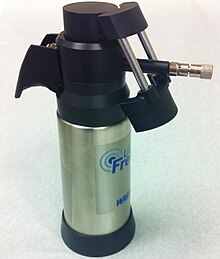 A common method of freezing lesions is using liquid nitrogen as the cooling solution. This −196 °C (−321 °F) cold liquid may be sprayed on the diseased tissue, circulated through a tube called a cryoprobe, or simply dabbed on with a cotton or foam swab.

Carbon dioxide is also available as a spray and is used to treat a variety of benign spots. Less frequently, doctors use carbon dioxide “snow” formed into a cylinder or mixed with acetone to form a slush that is applied directly to the treated tissue.

Recent advances in technology have allowed for the use of argon gas to drive ice formation using a principle known as the Joule-Thomson effect. This gives physicians excellent control of the ice, and minimizing complications using ultra-thin 17 gauge cryoneedles.

A mixture of dimethyl ether and propane is used in some “freeze spray” preparations such as Dr. Scholl’s Freeze Away. The mixture is stored in an aerosol spray type container at room temperature and drops to −41 °C (−42 °F) when dispensed. The mixture is often dispensed into a straw with a cotton-tipped swab. Similar products may use tetrafluoroethane or other substances.

A number of medical supply companies have developed cryogen delivery systems for cryosurgery. Most are based on the use of liquid nitrogen, although some employ the use of proprietary mixtures of gases that combine to form the cryogen.Cryosurgical systems

Cryosurgery is also used to treat internal and external tumors as well as tumors in the bone. To cure internal tumors, a hollow instrument called a cryoprobe is used, which is placed in contact with the tumor. Liquid nitrogen or argon gas is passed through the cryoprobe. Ultrasound or MRI is used to guide the cryoprobe and monitor the freezing of the cells. This helps in limiting damage to adjacent healthy tissues. A ball of ice crystals forms around the probe which results in freezing of nearby cells. When it is required to deliver gas to various parts of the tumor, more than one probe is used. After cryosurgery, the frozen tissue is either naturally absorbed by the body in the case of internal tumors, or it dissolves and forms a scab for external tumors.

Cryosurgery is a minimally invasive procedure, and is often preferred to more traditional kinds of surgery because of its minimal pain, scarring, and cost; however, as with any medical treatment, there are risks involved, primarily that of damage to nearby healthy tissue. Damage to nerve tissue is of particular concern.

Patients undergoing cryosurgery usually experience redness and minor-to-moderate localized pain, which most of the time can be alleviated sufficiently by oral administration of mild analgesics such as ibuprofen, codeine or acetaminophen (paracetamol). Blisters may form as a result of cryosurgery, but these usually scab over and peel away within a few days.