A cochlear implant (CI) is a surgically implanted neuroprosthetic device that provides a sense of sound to a person with moderate to profound sensorineural hearing loss. Cochlear implants bypass the normal acoustic hearing process, instead replacing it with electric hearing. Namely, the sound sensation comes from the sound that is converted to electric signals which directly stimulate the auditory nerve. The brain adapts to the new mode of hearing, and eventually can interpret the electric signals as sound and speech.

The implant has two main components. The outside component is generally worn behind the ear, but could also be attached to clothing, for example, in young children. This component, the sound processor, contains microphones, electronics that include DSP chips, battery, and a coil which transmits a signal to the implant across the skin. The inside component, the actual implant, has a coil to receive signals, electronics, and an array of electrodes which is placed into the cochlea, which stimulate the cochlear nerve.

The surgical procedure is performed under general anesthesia. Surgical risks are minimal but can include tinnitus and dizziness.

From the early days of implants in the 1970s and the 1980s, speech perception via an implant has steadily increased. Many users of modern implants gain reasonable to good hearing and speech perception skills post-implantation, especially when combined with lipreading. One of the challenges that remain with these implants is that hearing and speech understanding skills after implantation show a wide range of variation across individual implant users. Factors such as duration and cause of hearing loss, how the implant is situated in the cochlea, the overall health of the cochlear nerve, but also individual capabilities of re-learning are considered to contribute to this variation, yet no certain predictive factors are known. In children with severe to profound hearing loss, implants have shown to positively contribute to spoken language development.

Despite providing the ability for hearing and oral speech communication to children and adults with severe to profound hearing loss, there is also controversy around the devices. Much of the strongest objection to cochlear implants has come from the Deaf community. For some in the Deaf community, cochlear implants are an affront to their culture, which as some view it, is a minority threatened by the hearing majority.[7] 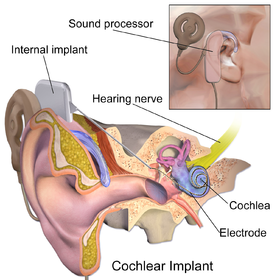 Cochlear implants bypass most of the peripheral auditory system which receives sound and converts that sound into movements of hair cells in the cochlea; the inside-portion of these hair cells release potassium ions in response to the movement of the hairs, and the potassium in turn stimulates other cells to release the neurotransmitter, glutamate, which makes the cochlear nerve send signals to the brain, which creates the experience of sound. Instead, the devices pick up sound and digitize it, convert that digitized sound into electrical signals, and transmit those signals to electrodes embedded in the cochlea. The electrodes electrically stimulate the cochlear nerve, causing it to send signals to the brain.

There are several systems available, but generally they have the following components:

The surgical procedure most often used to implant the device is called mastoidectomy with facial recess approach (MFRA). If a person’s individual anatomy prevents MFRA, other approaches, such as going through the suprameatal triangle, are used. A systematic literature review published in 2016 found that studies comparing the two approaches were generally small, not randomized, and retrospective so were not useful for making generalizations; it is not known which approach is safer or more effective.

The procedure is usually done under general anesthesia. Risks of the procedures include mastoiditis, otitis media (acute or with effusion), shifting of the implanted device requiring a second procedure, damage to the facial nerve, damage to the chorda tympani, and wound infections.

The rate of complications is about 12% for minor complications and 3% for major complications; major complications include infections, facial paralysis, and device failure. To avoid the risk of bacterial meningitis, which while low is about thirty times as high compared to people who don’t undergo CI procedures, the FDA recommends vaccination prior to the procedure. The rate of transient facial nerve palsy is estimated to be approximately 1%. Device failure requiring reimplantation is estimated to occur in 2.5-6% of the time. Up to one-third of people experience disequilibrium, vertigo, or vestibular weakness lasting more than 1 week after the procedure; in people under 70 these symptoms generally resolve over weeks to months, but in people over 70 the problems tend to persist.

A 2016 research study found that age at implantation was highly correlated with post-operative speech understanding performance for various test measures. In this study, patients who were implanted at age 65 or older performed significantly worse on speech perception testing in quiet and in noisy conditions compared to younger CI users. The deleterious effects of aging on central auditory processing abilities are thought to play an important role in impacting an individual’s speech perception abilities with CI. Prolonged duration of deafness is another factor which is thought to have a negative impact on overall speech understanding outcomes for CI users. However, this particular study found no statistical difference in the speech understanding abilities of CI patients over 65 who had been hearing impaired for 30 years or more prior to implantation. In general, outcomes for CI patients are dependent upon the individual’s level of motivation, expectations, exposure to speech stimuli and consistent participation in aural rehabilitation programs.

A 2011 AHRQ review of the evidence of the effectiveness of CI in people with bilateral hearing loss – the device’s primary use – found low to moderate quality data that showed speech perception in noisy conditions was much better for people who had implants in both ears done at the same time compared to people who had only one. The data also showed that no conclusions could be drawn about changes in speech perception in quiet conditions and health-related quality-of-life. There was only one good study comparing implanting implants in both ears at the same time to implanting them sequentially; this study found that in the sequential approach, the second implantation made no change, or made things worse.

Several 2010 and 2012 reviews found that the ability to communicate in spoken language was better the earlier the implantation was performed. The reviews also found that, overall, while cochlear implants provide open set speech understanding for the majority of implanted profoundly hearing-impaired children, the efficacy of cochlear implants is highly variable, and that it was not possible to accurately predict the specific outcome of the given implanted child.

A 2015 review examined whether CI implantation to treat people with bilateral hearing loss had any effect on tinnitus. This review found the quality of evidence to be poor and the results variable: overall total tinnitus suppression rates varied from 8% to 45% of people who received CI; decrease of tinnitus was seen in 25% to 72%, of people; for 0% to 36% of the people there was no change; increase of tinnitus occurred in between 0% to 25% of patients; and, in between 0 and 10% of cases, people who did not have tinnitus before the procedure, got it.

A 2015 literature review on the use of CI for people with auditory neuropathy spectrum disorder found that, as of that date, description and diagnosis of the condition was too heterogeneous to make clear claims about whether CI is a safe and effective way to manage it.

A 2016 systematic review of CI for people with unilateral hearing loss (UHL) found that of the studies conducted and published, none were randomized, only one evaluated a control group, and no study was blinded. After eliminating multiple uses of the same subjects, the authors found that 137 people with UHL had received a CI. While acknowledging the weakness of the data, the authors found that CI in people with UHL improves sound localization compared with other treatments in people who lost hearing after they learned to speak; in the one study that examined this, CI did improve sound localization in people with UHL who lost hearing before learning to speak. It appeared to improve speech perception and to reduce tinnitus.

As of October 2010, approximately 188,000 individuals had been fitted with cochlear implants. As of December 2012, the same publication cited approximately 324,000 cochlear implant devices having been surgically implanted. In the U.S., roughly 58,000 devices were implanted in adults and 38,000 in children. As of 2016, the Ear Foundation in the United Kingdom, estimates the number of cochlear implant recipients to be around 600,000.

As of 2013, the three cochlear implant devices approved for use in the US were manufactured by Cochlear Limited (Australia), Advanced Bionics (a division of Sonova) and MED-EL (Austria). In Europe, Africa, Asia, South America, and Canada, an additional device manufactured by Neurelec (France, a division of William Demant) was available. A device made by Nurotron (China) was also available in some parts of the world. Each manufacturer has adapted some of the successful innovations of the other companies to its own devices. There is no consensus that any one of these implants is superior to the others. Users of all devices report a wide range of performance after implantation.

Much of the strongest objection to cochlear implants has come from within the Deaf community, some of whom are pre-lingually Deaf people whose first language is a sign language. For some in the Deaf community, cochlear implants are an affront to their culture, which, as they view it, is a minority threatened by the hearing majority. This is an old problem for the Deaf community, going back as far as the 18th century with the argument of manualism vs. oralism. This is consistent with medicalisation and the standardisation of the “normal” body in the 19th century, when differences between normal and abnormal began to be debated. It is important to consider the sociocultural context, particularly in regards to the Deaf community, which considers itself to possess its own unique language and culture. This accounts for the cochlear implant being seen as an affront to their culture, as many do not believe that deafness is something that needs to be cured. However, it has also been argued that this does not necessarily have to be the case: the cochlear implant can act as a tool deaf people can use to access the “hearing world” without losing their Deaf identity.

Cochlear implants for congenitally deaf children are considered to be most effective when implanted at a young age, during the critical period in which the brain is still learning to interpret sound. Hence they are implanted before the recipients can decide for themselves, on the assumption that deafness is a disability. Deaf culture critics argue that the cochlear implant and the subsequent therapy often become the focus of the child’s identity at the expense of a possible future deaf identity and ease of communication in sign language, and claim that measuring the child’s success only by their mastery of hearing and speech will lead to a poor self-image as “disabled” (because the implants do not produce normal hearing) rather than having the healthy self-concept of a proudly deaf person.

Children with cochlear implants are more likely to be educated orally, in the standard fashion, and without access to sign language and are often isolated from other deaf children and from sign language.Cochlear implants have been one of the technological and social factors implicated in the decline of sign languages in the developed world. Some of the more extreme responses from deaf activists have labeled the widespread implantation of children as “cultural genocide”.

As the trend for cochlear implants in children grows, Deaf-community advocates have tried to counter the “either or” formulation of oralism vs manualism with a “both and” approach; some schools are now successfully integrating cochlear implants with sign language in their educational programs.