The chin or the mental region is the area of the face below the lower lip and including the mandibular prominence. It is formed by the lower front of the mandible.

The theory of evolution consists of two main points : “All life on Earth is connected and related to each other”; the diversity of life that is seen in the current world is a product of the “modifications of population by natural selection, where some traits were favored in and environments over others”. Similar to every species and their evolving characteristics, hominids have evolved in such a way where natural selection favored the trait of having a chin.

Read more Read :  Rhinoplasty surgery , Before and after surgery Videos

Read more about : Belepharoplasty surgery , Before and after surgery Videos

Read more about : Belepharoplasty surgery , Before and after surgery Videos

Read more about : Lipomatic surgery , before and after surgery Video

One of the most popular theories explaining the evolution of the chin seen in human beings is that it helps support the jaw against certain mechanical stresses. Ionut Ichim, a PhD student at the University of Otago published a journal in Medical Hypotheses in 2007 claiming that the evolution of the chin occurred as a response to the unique form of speech of human beings creating stress on the jaw from certain movements by the tongue muscles.

Nathan Holton, a scholar from the University of Iowa states that, "In some ways, it seems trivial, but a reason why chins are so interesting is we’re the only ones who have them." New research done by Holton shows that the evolution of this unique characteristic was formed, not by mechanical forces such as chewing, but perhaps from evolutionary adaptations involving face size and shape. Holton claims that this evolutionary adaptation occurred as our face became smaller compared to the Neanderthal-era human beings; the modern human head is approximately 15% shorter. Therefore through the change in size the chin became a factor that balanced the shape of the face.

Another perspective on the evolution of the chin was built pointing that it may have been a cause of sexual selection. This is when certain traits and characteristics of a species evolve in specific ways because they are seen more attractive to the opposite sex. Zaneta Thayer, a graduate from Northwestern University, and Seth Dobson, a biological anthropologists at Dartmouth, examined the chin shapes of both sexes to inspect any differences in the chin. They found that the male chin was taller and more pronounced, whilst the female chin was smaller. They claim that this difference in the chin disproved theories of the evolution through mechanical stress, because if the chins were adaptations of mechanical stress both genders will have the same chin shapes.

Overall, human beings are unique in the sense that they are the only species among hominids who have chins. In the novel, The Enduring Puzzle of the Human Chin, evolutionary anthropologists, James Pampush and David Daegling discuss various theories that have been raised to solve the puzzle of the chin. They conclude that, "Each of the proposals we have discussed falter either empirically or theoretically; some fail, to a degree, on both accounts… This should serve as motivation, not discouragement, for researchers to continue investigating this modern human peculiarity… perhaps understanding the chin will reveal some unexpected insight into what it means to be human." Through the examination of various theories that are constantly being formed, the truth about the origins of the human chin will perhaps be unraveled in the close future. 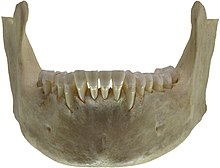 The terms cleft chin, chin cleft, dimple chin, or chin dimple, refer to a dimple on the chin. It is a Y-shaped fissure on the chin with an underlying bony peculiarity. Specifically, the chin fissure follows the fissure in the lower jaw bone that resulted from the incomplete fusion of the left and right halves of the jaw bone, or muscle, during the embryonal and fetal development. For other individuals, it can develop over time, often because one half of the jaw is longer than the other, leading to facial asymmetry.

A cleft chin is an inherited trait in humans, where the recessive gene causes the cleft chin, while the dominant presents without a cleft. However, it is also a classic example for variable penetrance with environmental factors or a modifier gene possibly affecting the phenotypical expression of the actual genotype. Cleft chins are common among people originating from Europe and the Middle East.

In Persian literature, the chin dimple is considered a factor of beauty, and is metaphorically referred to as "the chin pit" or "the chin well": a well in which the poor lover is fallen and trapped