Acute limb ischaemia (ALI) occurs when there is a sudden lack of blood flow to a limb.

Acute limb ischaemia is caused by embolism or thrombosis, or rarely by dissection or trauma. Thrombosis is usually caused by peripheral vascular disease (atherosclerotic disease that leads to blood vessel blockage), while an embolism is usually of cardiac origin. In the United States, ALI is estimated to occur in 14 out of every 100,000 people per year. With proper surgical care, acute limb ischaemia is a highly treatable condition; however, delayed treatment (beyond 6 to 12 hours) can result in permanent disability, amputation, and/or death.

In contrast to acute limb ischemia, chronic limb threatening ischemia results from peripheral artery disease that develops over time. While limbs in both acute and chronic limb ischemia may be pulseless, a chronically ischemic limb is typically warm and pink due to a well-developed collateral artery network and does not need emergency intervention to avoid limb loss.

The New Latin term ischaemia as written, is a British version of the word ischemia, and stems from the Greek terms ischein ‘to hold’; and haima ‘blood’. In this sense, ischaemia refers to the inhibition of blood flow to/through the limb. 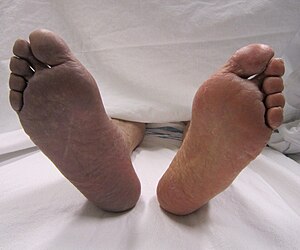 Symptoms of acute limb ischaemia include:

These symptoms are called “the six P’s'”; they are commonly mis-attributed to compartment syndrome. One more symptom would be the development of gangrene. Immediate medical attention should be sought with any of the symptoms.

In late stages, paresthesia is replaced by anesthesia due to death of nerve cells.

In some cases, gangrene can occur within six hours of ischaemia.

When a limb is ischemic in the non-acute (chronic) setting, the condition is alternatively called peripheral artery disease or critical limb ischemia, rather than ALI. In addition to limb ischemia, other organs can become ischemic, causing:

In order to treat acute limb ischaemia there are a series of things that can be done to determine where the occlusion is located, the severity, and what the cause was. To find out where the occlusion is located one of the things that can be done is simply a pulse examination to see where the heart rate can be detected and where it stops being sensed. Also there is a lower body temperature below the occlusion as well as paleness. A Doppler evaluation is used to show the extent and severity of the ischaemia by showing flow in smaller arteries. Other diagnostical tools are duplex ultrasonography, computed tomography angiography (CTA), and magnetic resonance angiography (MRA). The CTA and MRA are used most often because the duplex ultrasonography although non-invasive is not precise in planning revascularization. CTA uses radiation and may not pick up on vessels for revascularization that are distal to the occlusion, but it is much quicker than MRA. In treating acute limb ischaemia time is everything.

The primary intervention in acute limb ischaemia is emergency embolectomy using a Fogarty Catheter, providing the limb is still viable within the 4-6h timeframe. Other options include a vascular bypass to route blood flow around the clot.

Angiograph before and after thrombolytic treatment of acute limb ischemia.

Those unsuitable for surgery may receive thrombolytics. In the past, streptokinase was the main thrombolytic chemical. More recently, drugs such as tissue plasminogen activator, urokinase, and anisterplase have been used in its place. Mechanical methods of injecting the thrombolytic compounds have improved with the introduction of pulsed spray catheters—which allow for a greater opportunity for patients to avoid surgery. Pharmacological thrombolysis requires a catheter to be inserted into the affected area, attached to the catheter is often a wire with holes to allow for a wider dispersal area of the thrombolytic agent. These agents lyse the ischemia-causing thrombus quickly and effectively. However, the efficacy of thrombolytic treatment is limited by hemorrhagic complications. Plasma fibrinogen level has been proposed as a predictor of these hemorrhagic complications. However, based on a systemtic review of the available literature until January 2016, the predictive value of plasma is unproven.

The best course of treatment varies from case to case. The physician must take into account the details in the case before deciding on the appropriate treatment. No treatment is effective for every patient.

Treatment depends on many factors, including:

The major cause of acute limb ischaemia is arterial embolism (80%), while arterial thrombosis is responsible for 20% of cases. In rare instances, arterial aneurysm of the popliteal artery has been found to create a thrombosis or embolism resulting in ischaemia.