Yazd formerly also known as Yezd, is the capital of Yazd Province, Iran. The city is located 270 km (170 mi) southeast of Esfahan. At the 2011 census, the population was 529,673, and it is currently the 15th largest city in Iran. Since 2017, the historical city of Yazd is recognized as a World Heritage Site by UNESCO.

Because of generations of adaptations to its desert surroundings, Yazd has a unique Persian architecture. It is nicknamed the “City of Windcatchers” (شهر بادگیرها Shahr-e Badgirha) from its many examples. It is also very well known for its Zoroastrian fire temples, ab anbars (cisterns), qanats (underground channels), yakhchals (coolers), Persian handicrafts, handwoven cloth (Persian termeh), silk weaving, Persian cotton candy, and its time-honored confectioneries. Yazd is also known as City of Bicycles, because of its old history of bike riders, and the highest amount of bicycles per capita in Iran. It is reported that bicycle culture is entered and developed from Yazd, in contacting with the European visitors and tourists in the last century.

It is a good and noble city, and has a great amount of trade. They weave there quantities of a certain silk tissue known as Yasdi, which merchants carry into many quarters to dispose of. When you leave this city to travel further, you ride for seven days over great plains, finding harbour to receive you at three places only. There are many fine woods producing dates upon the way, such as one can easily ride through; and in them there is great sport to be had in hunting and hawking, there being partridges and quails and abundance of other game, so that the merchants who pass that way have plenty of diversion. There are also wild asses, handsome creatures. At the end of those seven marches over the plain, you come to a fine kingdom which is called Kerman. 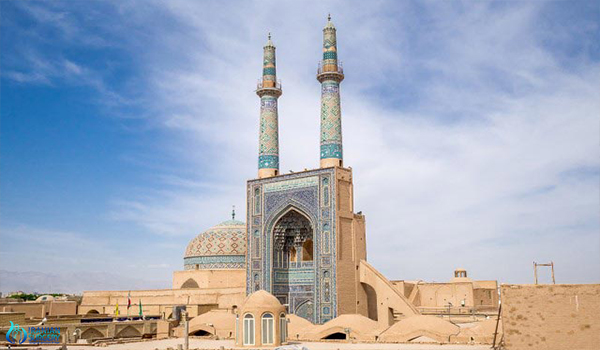 Yazd briefly served as the capital of the Muzaffarid Dynasty in the fourteenth century, and was unsuccessfully besieged in 1350–1351 by the Injuids under Shaikh Abu Ishaq. The Friday (or Congregation) mosque, arguably the city’s greatest architectural landmark, as well as other important buildings, date to this period. During the Qajar dynasty (18th century AD) it was ruled by the Bakhtiari Khans.

Under the rule of the Safavid (16th century), some people migrated from Yazd and settled in an area that is today on the Iran-Afghanistan border. The settlement, which was named Yazdi, was located in what is now Farah City in the province of the same name in Afghanistan. Even today, people from this area speak with an accent very similar to that of the people of Yazd.

One of the notable things about Yazd is its family-centered culture. According to official statistics from Iran’s National Organization for Civil Registration, Yazd is among the three cities with the lowest divorce rates in Iran.