A uric acid blood test, also known as a serum uric acid measurement, determines how much uric acid is present in your blood. The test can help determine how well your body produces and removes uric acid.

Uric acid is a chemical produced when your body breaks down foods that contain organic compounds called purines. Foods and beverages with a high purine content include:

Purines are also created through the natural process of cell breakdown in the body.

High levels of uric acid are associated with a condition called gout. Gout is a form of arthritis that causes swelling of the joints, especially in the feet and big toes. Another cause of hyperuricemia is increased cell death, due to cancer or cancer treatments. This can lead to an accumulation of uric acid in the body.

It’s also possible to have too little uric acid in your blood, which is a symptom of liver or kidney disease. It’s also a symptom of Fanconi syndrome, a disorder of the kidney tubules that prevents the absorption of substances such as glucose and uric acid. These substances are then passed in the urine instead. 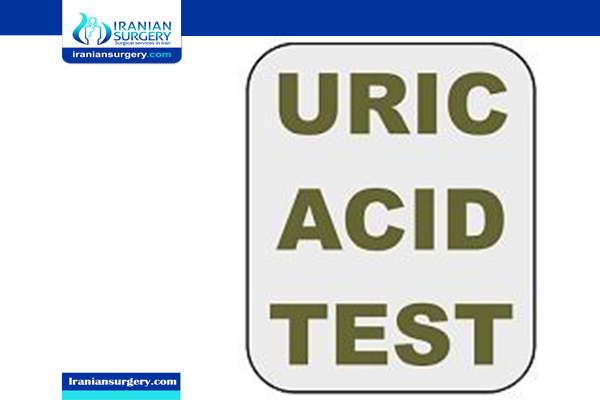 Most commonly, the test is used to:

You may need a uric acid test if:

Another option for uric acid testing is to test your urine over a 24-hour period. Sometimes your doctor will recommend both to confirm a diagnosis.

The following may interfere with your uric acid test results:

Tell your doctor about any prescription or over-the-counter medications or supplements you’re taking.

You may need to fast (refrain from eating or drinking) for four hours before the test. 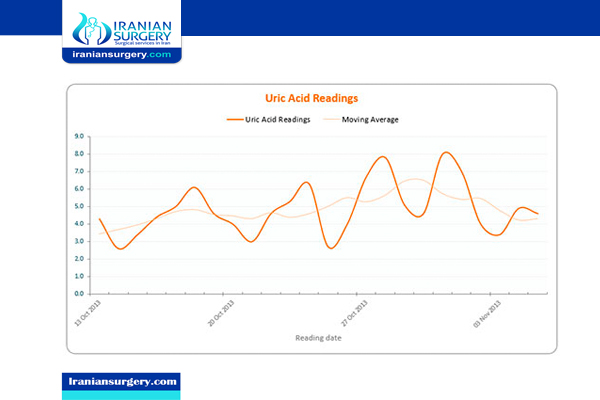 How a uric acid blood test is done

The process of obtaining a blood sample for testing is called venipuncture.

Your doctor or another healthcare provider takes blood from a vein, usually from your inner elbow or the back of your hand. First, they sterilize the area with an antiseptic. They then wrap an elastic band around your arm to allow blood to fill the veins.

They next insert a needle into your vein. The blood is collected in an attached vial. Once the blood has been collected, the plastic band is untied and the needle removed from the vein. Pressure is applied to the site of the needle entry and a bandage applied if necessary.

For infants and young children, a small cut may be made on the arm and a test strip or slide used to collect a small sample of blood. The area is then cleaned and bandaged if necessary.

Once collected, the blood is sent to a laboratory for analysis.

What the test results mean

Uric acid levels can vary based on sex. Normal values for women are 2.5 to 7.5 milligrams/deciliter (mg/dL) and for men 4.0 to 8.5 mg/dL. However, the values may vary based on the lab doing the testing.

According to the American College of Rheumatology (ACR), your target level if you have gout is a blood uric acid level of less than 6.0 mg/dL. Low levels of uric acid are less common than high levels and are less of a health concern.

High levels of uric acid in your blood typically indicate that your body is making too much uric acid or that your kidneys aren’t removing enough uric acid from your body. Having cancer or undergoing cancer treatment can also raise your uric acid levels.

High uric acid levels in your blood can also indicate of a variety of conditions, including:

The blood uric acid test isn’t considered a definitive test for gout. Only testing a person’s joint fluid for monosodium urate can absolutely confirm the presence of gout. However, your doctor can make an educated guess based on high blood levels and your gout symptoms.

Also, it’s possible to have high uric acid levels without the symptoms of gout. This is known as asymptomatic hyperuricemia.

Low levels of uric acid in the blood may suggest:

The risks of a uric acid blood test

If you experience significant bleeding that won’t stop after the blood test, seek emergency medical treatment. However, this is a rare occurrence, as are the other complications noted here.

After the uric acid test

Your uric acid blood test results can help determine what treatments are appropriate. In some cases, you may not need treatment.

If your doctor diagnoses you with gout, treatment could include taking medications to reduce pain and swelling. Dietary changes to cut back on purines can also help. Changing your diet can also benefit you if you have chronic uric acid kidney stones.